Hypercalcemia (>11 mg/dL) was reported in 16% of patients in a 3-month study of a solid dose formulation of calcium acetate; all cases resolved upon lowering the dose or discontinuing treatment.

Mild hypercalcemia may be asymptomatic or manifest itself as constipation, anorexia, nausea, and vomiting.  More severe hypercalcemia is associated with confusion, delirium, stupor, and coma.  Decreasing dialysate calcium concentration could reduce the incidence and severity of calcium acetate-induced hypercalcemia.  Isolated cases of pruritus have been reported, which may represent allergic reactions.

The following additional adverse reactions have been identified during post-approval of calcium acetate:  dizziness, edema, and weakness.

The drug interaction of calcium acetate is characterized by the potential of calcium to bind to drugs with anionic functions (e.g., carboxyl and hydroxyl groups).  Calcium Acetate Tablet may decrease the bioavailability of tetracyclines or fluoroquinolones via this mechanism.

There are no empirical data on avoiding drug interactions between calcium acetate and most concomitant drugs.  When administering an oral medication with calcium acetate where a reduction in the bioavailability of that medication would have a clinically significant effect on its safety or efficacy, administer the drug one hour before or three hours after calcium acetate.  Monitor blood levels of the concomitant drugs that have a narrow therapeutic range.  Patients taking anti-arrhythmic medications for the control of arrhythmias and anti-seizure medications for the control of seizure disorders were excluded from the clinical trials with all forms of calcium acetate.

In a study of 15 healthy subjects, a co-administered single dose of 4 calcium acetate tablets approximately 2.7 g, decreased the bioavailability of ciprofloxacin by approximately 50%.

Clinical studies of calcium acetate did not include sufficient numbers of subjects aged 65 and over to determine whether they respond differently from younger subjects.  Other clinical experience has not identified differences in responses between the elderly and younger patients.  In general, dose selection for an elderly patient should be cautious, usually starting at the low end of the dosing range, reflecting the greater frequency of decreased hepatic, renal, or cardiac function, and of concomitant disease or other drug therapy.

Administration of calcium acetate tablet in excess of the appropriate daily dosage may result in hypercalcemia [see Warnings and Precautions (5.1)]. 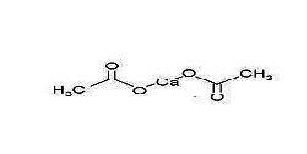 The patients received calcium acetate tablet [667 mg] at each meal for a period of 12 weeks. The initial starting dose was 2 tablets per meal for 3 meals a day, and the dose was adjusted as necessary to control serum phosphorus levels. The average final dose after 12 weeks of treatment was 3.4 tablets per meal. Although there was a decrease in serum phosphorus, in the absence of a control group the true magnitude of effect is uncertain.

Inform patients to take calcium acetate tablets with meals, adhere to their prescribed diets, and avoid the use of calcium supplements including nonprescription antacids. Inform the patients about the symptoms of hypercalcemia [see Warnings and Precautions (5.1) and Adverse Reactions (6.1)].

Advise patients who are taking an oral medication where reduction in the bioavailability of that medication would have clinically significant effect on its safety and efficacy to take the drug one hour before or three hours after calcium acetate tablets. 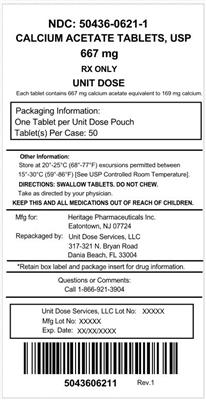