Phenazopyridine Hydrochloride is a reddish-brown, odorless, slightly bitter, crystalline powder. It has a specific local analgesic effect in the urinary tract, promptly relieving burning and pain.

Following is the structural formula:

Phenazopyridine hydrochloride is excreted in the urine where it exerts a topical analgesic effect on the mucosa of the urinary tract. This action helps to relieve pain, burning, urgency and frequency. The precise mechanism of action is unknown.

Phenazopyridine HCl is indicated for the symptomatic relief of pain, burning, urgency frequency, and other discomforts arising from irritation of the mucosa of the lower urinary tract caused by infection, trauma, surgery, endoscopic procedures, or the passage of sounds or catheters.

The use of phenazopyridine for relief of symptoms should not delay definitive diagnosis and treatment of causative conditions. The drug should be used for symptomatic relief of pain and not as a substitute for specific surgery or antimicrobial therapy.

In patients who are hypersensitive to the drug or its ingredients. Phenazopyridine is contraindicated in patients with renal insufficiency, severe liver disease, severe hepatitis or pyelonephritis of pregnancy.

It should be used cautiously in the presence of GI disturbances.

Phenazopyridine hydrochloride is reasonably anticipated to be a human carcinogen based on sufficient evidence of carcinogenicity in experimental animals (IARC 1980, 1982, 1987, NCI 1978). When administered in the diet, phenazopyridine hydrochloride increased the incidences of hepatocellular adenomas and carcinomas in female mice and adenomas and adenocarcinomas of the colon and rectum in rats of both sexes.

The patient should be advised that phenazopyridine produces an orange to red color in the urine and feces, and may cause staining. Phenazopyridine may cause discoloration of body fluids and staining of contact lenses has been reported. A yellowish color of the skin or sclera may indicate accumulation of phenazopyridine resulting from impaired renal function and necessitates discontinuance of the drug. It should be noted that a decline in renal function is common in elderly patients. Phenazopyridine may mask pathological conditions and interfere with laboratory test values using colorimetric, spectrophotometric or fluorometric analysis methods.

Cautious use in patients with G-6-PD deficiency is advised since these patients are susceptible to oxidative hemolysis and may have greater potential to develop hemolytic anemia.

The patient should be advised to take phenazopyridine with or following food or after eating a snack to reduce stomach upset.

The interaction of phenazopyridine with other drugs has not been studied in a systematic manner. However, the medical literature to date suggests that no significant interactions have been reported.

Reproductive studies with phenazopyridine (in combination with sulfacytine) in rats given up to 110 mg/kg/day and in rabbits given up to 39 mg/kg/day during organogenesis revealed no evidence of harm to offspring.

Adequate and well-controlled studies have not been performed in the pediatric population. No pediatric-specific problems have been documented.

Symptoms: Exceeding the recommended dose in patients with normal renal function or administering the recommended dose to patients with impaired renal function (common in elderly patients) may lead to increased serum levels and toxic reactions. Methemoglobinemia generally follows a massive, acute overdose. Methylene blue, 1 to 2 mg/kg/dose given i.v. as a 1% solution as needed, should cause prompt reduction of the methemoglobinemia and disappearance of the cyanosis which is an aid in diagnosis. Oxidative Heinz body hemolytic anemia also may occur, and "bite cells" (degmacytes) may be present in a chronic overdosage situation. Red blood cell G-6-PD deficiency may predispose to hemolysis; however, hemolysis may occur at normal doses in patients with G-6-PD Mediterranean.

Treatment: Treatment is symptomatic and supportive.

Adults: 200 mg 3 times daily after meals. When used concomitantly with an antibacterial agent for the treatment of a urinary tract infection, the administration of phenazopyridine should not exceed 2 days. If symptoms persist, the patient should be re-evaluated. 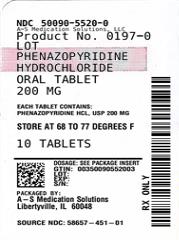