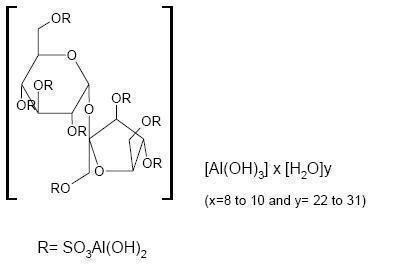 In a multicenter, double-blind, placebo-controlled study of CARAFATE Suspension, a dosage regimen of 1 g (10 mL) four times daily was demonstrated to be superior to placebo in ulcer healing.
Results From Clinical Trials Healing Rates for Acute Duodenal Ulcer

Equivalence of sucralfate suspension to sucralfate tablets has not been demonstrated.

CARAFATE (sucralfate) Suspension is indicated in the short-term (up to 8 weeks) treatment of active duodenal ulcer.

CARAFATE is contraindicated for patients with known hypersensitivity reactions to the active substance or to any of the excipients.

The physician should read the "PRECAUTIONS" section when considering the use of CARAFATE in pregnant or pediatric patients, or patients of childbearing potential.

The mechanism of these interactions appears to be nonsystemic in nature, presumably resulting from sucralfate binding to the concomitant agent in the gastrointestinal tract. In all cases studied to date (cimetidine, ciprofloxacin, digoxin, norfloxacin, ofloxacin, and ranitidine), dosing the concomitant medication 2 hours before sucralfate eliminated the interaction. Due to CARAFATE's potential to alter the absorption of some drugs, CARAFATE should be administered separately from other drugs when alterations in bioavailability are felt to be critical. In these cases, patients should be monitored appropriately.

Clinical studies of CARAFATE Suspension did not include sufficient numbers of subjects aged 65 and over to determine whether they respond differently from younger subjects. Other reported clinical experience has not identified differences in responses between the elderly and younger patients. In general, dose selection for an elderly patient should be cautious, usually starting at the low end of the dosing range, reflecting the greater frequency of decreased hepatic, renal, or cardiac function, and of concomitant disease or other drug therapy. (See ) DOSAGE AND ADMINISTRATION

This drug is known to be substantially excreted by the kidney, and the risk of toxic reactions to this drug may be greater in patients with impaired renal function (See ). Because elderly patients are more likely to have decreased renal function, care should be taken in dose selection, and it may be useful to monitor renal function. PRECAUTIONS Special Populations: Chronic Renal Failure and Dialysis Patients

back pain, headache Other:

cases of hypersensitivity have been reported with the use of sucralfate suspension, including anaphylactic reactions, dyspnea, lip swelling, edema of the mouth, pharyngeal edema, pruritus, rash, swelling of the face and urticaria.    Post-marketing

Cases of bronchospasm, laryngeal edema and respiratory tract edema have been reported with an unknown oral formulation of sucralfate.

Cases of hyperglycemia have been reported with sucralfate

Inadvertent injection of insoluble sucralfate and its insoluble excipients has led to fatal complications, including pulmonary and cerebral emboli. Sucralfate is intended for intravenous administration. not

In general, dose selection for an elderly patient should be cautious, usually starting at the low end of the dosing range, reflecting the greater frequency of decreased hepatic, renal, or cardiac function, and of concomitant disease or other drug therapy (See ). Elderly:PRECAUTIONS Geriatric Use 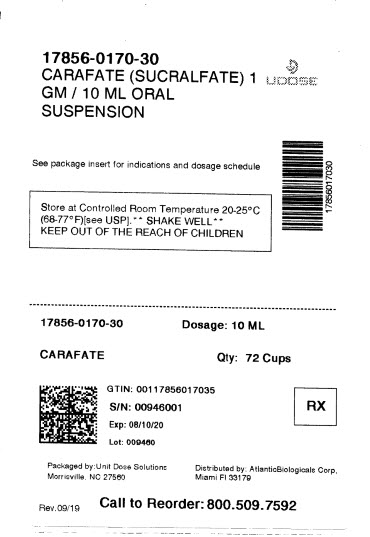