For Dermatologic Use Only-Not for Ophthalmic, Oral, or Intravaginal Use

Azelaic acid is a white, odorless crystalline solid that is poorly soluble in water at 20°C (0.24%), but freely soluble in boiling water and in ethanol.

FINACEA Gel, 15%, was evaluated for the treatment of mild to moderate papulopustular rosacea in 2 clinical trials comprising a total of 664 (333 active to 331 vehicle) patients. Both trials were multicenter, randomized, double-blind, vehicle-controlled 12-week studies with identical protocols. Overall, 92.5% of patients were Caucasian and 73% of patients were women, and the mean age was 49 (range 21 to 86) years. Enrolled patients had mild to moderate rosacea with a mean lesion count of 18 (range 8 to 60) inflammatory papules and pustules. Subjects without papules and pustules, with nodules, rhinophyma, or ocular involvement, and a history of hypersensitivity to propylene glycol or to any other ingredients of the study drug were excluded. FINACEA Gel, 15%, or its vehicle were to be applied twice daily for 12 weeks; no other topical or systemic medication affecting the course of rosacea and/or evaluability was to be used during the studies. Patients were instructed to avoid spicy foods, thermally hot foods and drinks, and alcoholic beverages during the study, and to use only very mild soaps or soapless cleansing lotion for facial cleansing.

The primary efficacy endpoints were both

1.
change from baseline in inflammatory lesion counts and
2.
success defined as a score of clear or minimal with at least a 2 step reduction from baseline on the Investigator's Global Assessment (IGA):

Primary efficacy assessment was based on the intent-to-treat (ITT) population with last observation carried forward (LOCF).

Both studies demonstrated a statistically significant difference in favor of FINACEA Gel, 15%, over its vehicle in reducing the number of inflammatory papules and pustules associated with rosacea (Table 1) and with success on the IGA in the ITT-LOCF population at the end of treatment.

FINACEA Gel, 15%, was superior to the vehicle with regard to success based on the investigator's global assessment of rosacea on a 7-point static score at the end of treatment, (ITT population; Table 2).

FINACEA Gel, 15%, is contraindicated in individuals with a history of hypersensitivity to propylene glycol or any other component of the formulation.

FINACEA Gel, 15%, is for dermatologic use only, and not for ophthalmic, oral or intravaginal use.

Contact with the eyes should be avoided. If sensitivity or severe irritation develops with the use of FINACEA Gel, 15%, treatment should be discontinued and appropriate therapy instituted.

In a transgenic mouse study, chronic use of FINACEA Gel led to an increased number of animals with papillomas at the treatment site (see PRECAUTIONS:  Carcinogenesis, Mutagenesis, and Impairment of Fertility).  The clinical relevance of the findings in animal studies to humans is not clear.

•
FINACEA Gel, 15%, is to be used only as directed by the physician.
•
FINACEA Gel, 15%, is for external use only. It is not to be used orally, intravaginally, or for the eyes.
•
Cleanse affected area(s) with a very mild soap or a soapless cleansing lotion and pat dry with a soft towel before applying FINACEA Gel, 15%. Avoid alcoholic cleansers, tinctures and astringents, abrasives and peeling agents.
•
Avoid contact of FINACEA Gel, 15%, with the mouth, eyes and other mucous membranes. If it does come in contact with the eyes, wash the eyes with large amounts of water and consult a physician if eye irritation persists.
•
The hands should be washed following application of FINACEA Gel, 15%.
•
Cosmetics may be applied after FINACEA Gel, 15%, has dried.
•
Skin irritation (e.g., pruritus, burning, or stinging) may occur during use of FINACEA Gel, 15%, usually during the first few weeks of treatment. If irritation is excessive or persists, use of FINACEA Gel, 15%, should be discontinued, and patients should consult their physician (see ADVERSE REACTIONS).
•
Avoid any foods and beverages that might provoke erythema, flushing, and blushing (including spicy food, alcoholic beverages, and thermally hot drinks, including hot coffee and tea).
•
Patients should report abnormal changes in skin color to their physician.
•
Avoid the use of occlusive dressings or wrappings.

There have been no formal studies of the interaction of FINACEA Gel, 15%, with other drugs.

Azelaic acid was not mutagenic or clastogenic in a battery of in vitro (Ames assay, HGPRT in V79 cells {Chinese hamster lung cells}, and chromosomal aberration assay in human lymphocytes) and in vivo (dominant lethal assay in mice and mouse micronucleus assay) genotoxicity tests.

Oral administration of azelaic acid at dose levels up to 2500 mg/kg/day (162 times the maximum recommended human dose based on body surface area) did not affect fertility or reproductive performance in male or female rats.

There are no adequate and well-controlled studies of topically administered azelaic acid in pregnant women. The experience with FINACEA Gel, 15%, when used by pregnant women is too limited to permit assessment of the safety of its use during pregnancy.

Because animal reproduction studies are not always predictive of human response, this drug should be used only if clearly needed during pregnancy.

Equilibrium dialysis was used to assess human milk partitioning in vitro. At an azelaic acid concentration of 25 μg/mL, the milk/ plasma distribution coefficient was 0.7 and the milk/buffer distribution was 1.0, indicating that passage of drug into maternal milk may occur. Since less than 4% of a topically applied dose of azelaic acid cream, 20%, is systemically absorbed, the uptake of azelaic acid into maternal milk is not expected to cause a significant change from baseline azelaic acid levels in the milk. However, caution should be exercised when FINACEA Gel, 15%, is administered to a nursing mother.

Safety and effectiveness of FINACEA Gel, 15%, in pediatric patients have not been established.

Clinical studies of FINACEA Gel, 15%, did not include sufficient numbers of subjects aged 65 and over to determine whether they respond differently from younger subjects.

Overall, treatment related adverse events, including burning, stinging/tingling, dryness/tightness/scaling, itching, and erythema/irritation/redness, were 19.4% (24/124) for FINACEA Gel, 15%, and 7.1% (9/127) for the active comparator gel at 15 weeks.

FINACEA Gel, 15%, and its vehicle caused irritant reactions at the application site in human dermal safety studies. FINACEA Gel, 15%, caused significantly more irritation than its vehicle in a cumulative irritation study. Some improvement in irritation was demonstrated over the course of the clinical studies, but this improvement might be attributed to subject dropouts. No phototoxicity or photoallergenicity were reported in human dermal safety studies.

FINACEA Gel, 15%, is intended for cutaneous use only. If pronounced local irritation occurs, patients should be directed to discontinue use and appropriate therapy should be instituted (See PRECAUTIONS).

A thin layer of FINACEA Gel, 15%, should be gently massaged into the affected areas on the face twice daily, in the morning and evening. Patients should be reassessed if no improvement is observed upon completing 12 weeks of therapy.

FINACEA Gel, 15%, is supplied in tubes in the following size:

Intendis is part of the Bayer Group

Dispense as a Complete Package
Package contains: Finacea® (azelaic acid) Gel, 15%, 50 g
For Dermatologic Use Only - Not For Ophthalmic Use 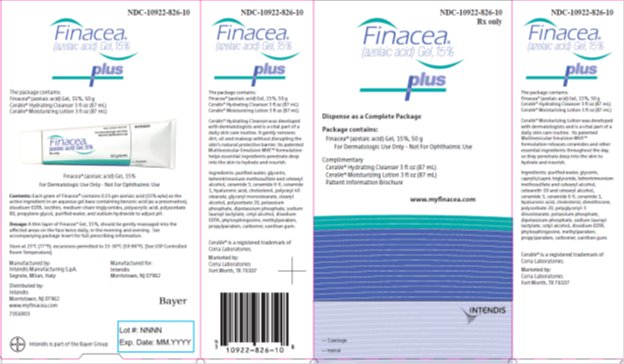 For Dermatologic Use Only
Not For Ophthalmic Use 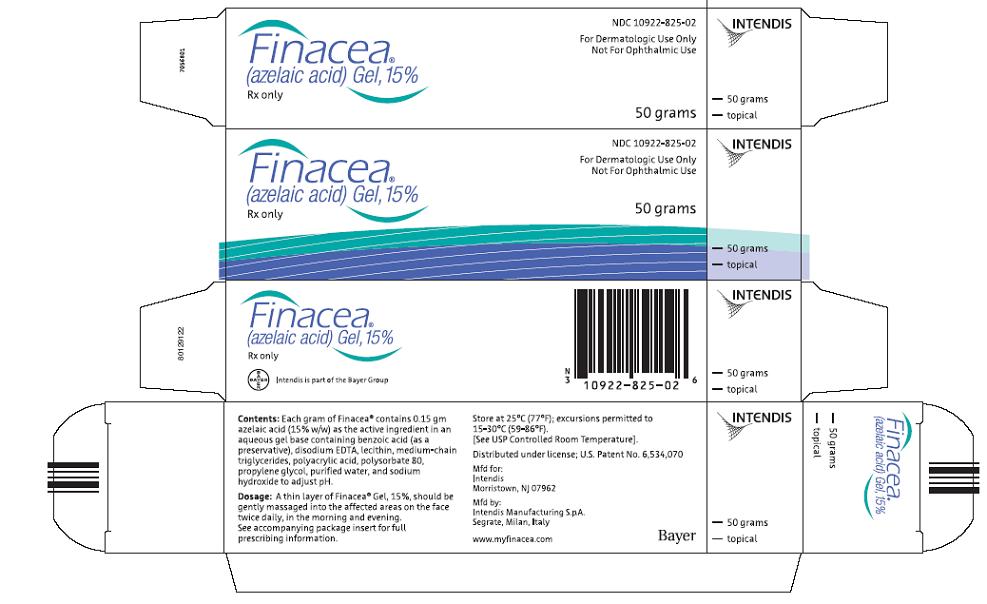