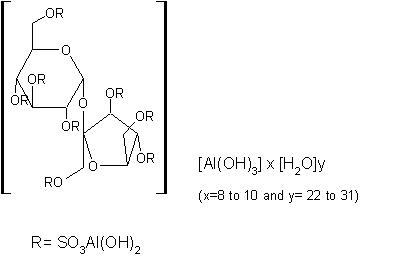 These observations suggest that sucralfate’s antiulcer activity is the result of formation of an ulcer-adherent complex that covers the ulcer site and protects it against further attack by acid, pepsin, and bile salts. There are approximately 14-16 mEq of acid-neutralizing capacity per 1-g dose of sucralfate.

Over 600 patients have participated in well-controlled clinical trials worldwide. Multicenter trials conducted in the United States, both of them placebo-controlled studies with endoscopic evaluation at 2 and 4 weeks,showed:


The sucralfate-placebo differences were statistically significant in both studies at 4 weeks but not at 2 weeks. The poorer result in the first study may have occurred because sucralfate was given 2 hours after meals and at bedtime rather than 1 hour before meals and at bedtime, the regimen used in international studies and in the second United States study. In addition, in the first study liquid antacid was utilized as needed, whereas in the second study antacid tablets were used.

The mechanism of these interactions appears to be nonsystemic in nature, presumably resulting from sucralfate binding to the concomitant agent in the gastrointestinal tract. In all cases studied to date (cimetidine, ciprofloxacin, digoxin, norfloxacin, ofloxacin, and ranitidine), dosing the concomitant medication 2 hours before sucralfate eliminated the interaction. Because of the potential of sucralfate to alter the absorption of some drugs, sucralfate should be administered separately from other drugs when alterations in bioavailability are felt to be critical. In these cases, patients should be monitored appropriately.

Sucralfate 1-g tablets are supplied in bottles of 90, 100, 360 and 500.
Light blue, scored, oblong tablets are engraved WATSON 780 on one side and are blank with bisect on the other.

Prescribing Information as of June 2008A 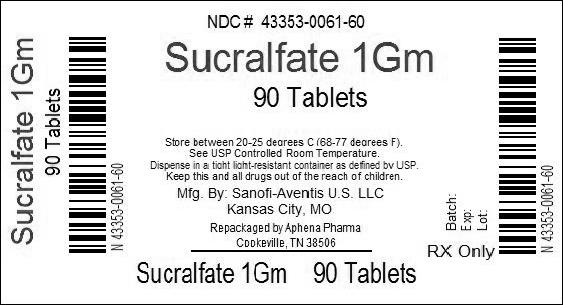