Butalbital (5-allyl-5-isobutylbarbituric acid), is a short to intermediate-acting barbiturate of molecular weight 224.26. It has the following structural formula: 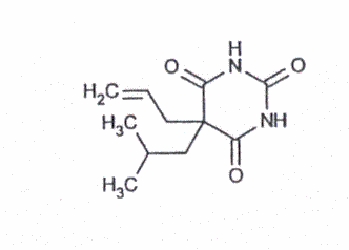 Acetaminophen (4´-hydroxyacetanilide), is a non-opiate, non-salicylate analgesic and antipyretic of molecular weight 151.16. It has the following structural formula: 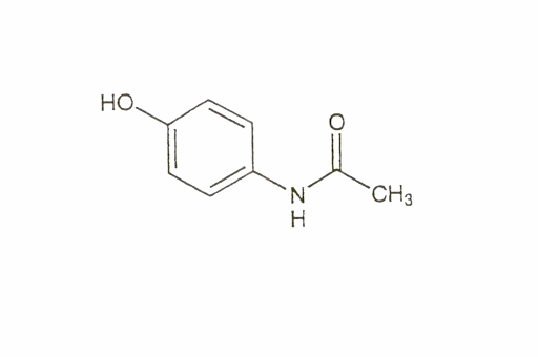 Caffeine (1,3,7-trimethylxanthine), is a central nervous system stimulant of molecular weight 194.19. It has the following structural formula: 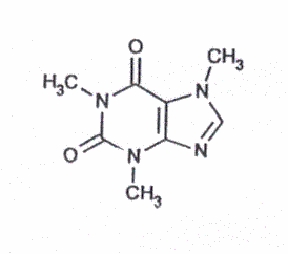 Acetaminophen is rapidly absorbed from the gastrointestinal tract and is distributed throughout most body tissues. The plasma half-life is 1.25 to 3 hours but may be increased by liver damage and following overdosage. Elimination of acetaminophen is principally by liver metabolism (conjugation) and subsequent renal excretion of metabolites. Approximately 85% of an oral dose appears in the urine within 24 hours of administration, most as the glucuronide conjugate, with small amounts of other conjugates and unchanged drug.

Like most xanthines, caffeine is rapidly absorbed and distributed in all body tissues and fluids, including the central nervous system (CNS), fetal tissues, and breast milk.

Butalbital, Acetaminophen and Caffeine capsules are indicated for the relief of the symptom complex of tension (or muscle contraction) headache.

Rarely, acetaminophen may cause serious skin reactions such as acute generalized exanthematous pustulosis (AGEP), Stevens-Johnson Syndrome (SJS), and toxic epidermal necrolysis (TEN), which can be fatal. Patients should be informed about the signs of serious skin reactions and use of the drug should be discontinued at the first appearance of skin rash or any other sign of hypersensitivity.

There have been post-marketing reports of hypersensitivity and anaphylaxis associated with use of acetaminophen. Clinical signs included swelling of the face, mouth, and throat, respiratory distress, urticaria, rash, pruritus, and vomiting. There were infrequent reports of life-threatening anaphylaxis requiring emergency medical attention. Instruct patients to discontinue Butalbital, Acetaminophen and Caffeine Capsules, USP immediately and seek medical care if they experience these symptoms. Do not prescribe Butalbital, Acetaminophen and Caffeine Capsules. USP for patients with acetaminophen allergy.

Butalbital, acetaminophen, and caffeine capsules should be prescribed with caution in certain special-risk patients, such as the elderly or debilitated, and those with severe impairment of renal or hepatic function, or acute abdominal conditions.

Alcohol and other CNS depressants may produce an additive CNS depression when taken with this combination product and should be avoided.

• Do not take Butalbital, Acetaminophen, and Caffeine Capsules if you are allergic to any of its ingredients.

• If you develop signs of allergy such as a rash, or difficulty breathing, stop taking Butalbital, Acetaminophen, and Caffeine Capsules and contact your healthcare provider immediately.

• Do not take more than 4000 milligrams of acetaminophen per day. Call your doctor if you took more than the recommended dose.

Clinical studies of butalbital, acetaminophen and caffeine capsules did not include sufficient numbers of subjects aged 65 and over to determine whether they respond differently from younger subjects. Other reported clinical experience has not identified differences in responses between the elderly and younger patients. In general, dose selection for an elderly patient should be cautious, usually starting at the low end of the dosing range, reflecting the greater frequency of decreased hepatic, renal, or cardiac function, and of concomitant disease or other drug therapy.

In acetaminophen overdosage: dose-dependent, potentially fatal hepatic necrosis is the most serious adverse effect. Renal tubular necroses, hypoglycemic coma, and thrombocytopenia may also occur. Early symptoms following a potentially hepatotoxic overdose may include: nausea, vomiting, diaphoresis, and general malaise. Clinical and laboratory evidence of hepatic toxicity may not be apparent until 48 to 72 hours post-ingestion.

A single or multiple overdose with this combination product is a potentially lethal polydrug overdose, and consultation with a regional poison control center is recommended. Immediate treatment includes support of cardiorespiratory function and measures to reduce drug absorption.

One or 2 capsules every 4 hours as needed. Total daily dosage should not exceed 6 capsules.

Containing: 50 mg butalbital, 300 mg acetaminophen, and 40 mg caffeine. Available as hard gelatin capsules with a green cap, printed with AP, and a yellow body, printed with 661.