in a Urea Vehicle

FOR DERMATOLOGIC USE ONLY

The most widely accepted mechanism of action of sulfonamides is the Woods-Fildes theory, which is based on the fact that sulfonamides act as competitive antagonists to para-aminobenzoic acid P ( ABA), an essential component for bacterial growth. While absorption through intact skin in humans has not been determined, sodium sulfacetamide is readily absorbed from the gastrointestinal tract when taken orally and excreted in the urine largely unchanged. The biological half-life has variously been reported as 7 o t 12.8 hours.

Although rare, sensitivity t o sodium sulfacetamide may occur. Therefore, caution and careful supervision should be observed when prescribing this drug for patients who may be prone to hypersensitivity to topical sulfonamides. Systemic toxic reactions such as agranulocytosis, acute hemolytic anemia, purpura hemorrhagica, drug fever, jaundice, and contact dermatitis indicate hypersensitivity to sulfonamides. Sulfonamides are known to cause Stevens-Johnson syndrome in hypersensitive individuals. Stevens-Johnson syndrome also has been reported following the use of sodium sulfacetamide topically. Cases of drug-induced systemic lupus erythematosus from topical sulfacetamide also have been reported.

General: Nonsusceptible organisms, including fungi, may proliferate with the use of this preparation. Hypersensitivity reactions may recur when a sulfonamide is readministered, irrrespective of the route of administration, and cross hypersensitivity between different sulfonamides may occur. If Sodium Sulfacetamide Medicated Pads produce signs of hypersensitivity or other untoward reactions, discontinue use of the preparation. Systemic absorption of topical sulfonamides is greater following application to large, infected, abraded, denuded, or severely burned areas. Under these circumstances, potentially any of the adverse effects produced by the systemic administration of these agents could occur, and appropriate observations and laboratory determinations should be performed.

Avoid contact with eyes, eyelids, lips and mucous membranes. If accidental contact occurs, rinse with water. Patients should discontinue the use of Sodium Sulfacetamide Medicated Pads if the condition becomes worse, or if a rash develops in the area being treated or elsewhere. Sodium Sulfacetamide Medicated Pads also should be discontinued promptly and the physician notified if any arthritis, fever, or sores in the mouth develop.

Carcinogenesis, Mutagenesis, and Impairment of Fertility: Long-term animal studies for carcinogenic potential have not been performed on Sodium Sulfacetamide Medicated Pads.

Pediatric Use: Safety and effectiveness in children below the age of 12 years have not been established.

Reports of irritation and hypersensitivity to sodium sulfacetamide are uncommon. The following adverse reactions, reported after administration of sterile ophthalmic sodium sulfacetamide, are noteworthy: instances of Stevens-Johnson syndrome and instances of local hypersensitivity, which progressed to a syndrome resembling systemic lupus erythematosus; in one case a fatal outcome has been reported (see WARNINGS).

Gently apply Sodium Sulfacetamide Medicated Pads to the affected areas 1 to 2 times daily or as directed by a physician until the infection has cleared.

Sodium Sulfacetamide Medicated Pads may darken after prolonged storage. Slight discoloration does not impair the efficacy or safety of the product.

In a Urea Vehicle

For dermatologic use only – not for ophthalmic use

Contains: 30 Foil Pouches, each with a single-use medicated pad (2.5 mL each)

A division of Nycomed US Inc. 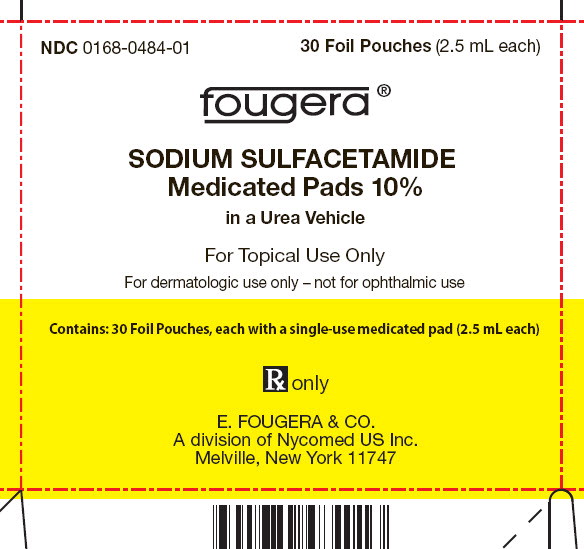 in a Urea Vehicle

For dermatologic use only – not for ophthalmic use

A division of Nycomed US Inc.