For topical use only. Not for ophthalmic, oral or intravaginal use.

The chemical name of adapalene is 6-[3-(1-adamantyl)-4-methoxyphenyl]-2-naphthoic acid. It is a white to off-white powder which is soluble in tetrahydrofuran, sparingly soluble in ethanol, and practically insoluble in water. The molecular formula is C28H28O3 and molecular weight is 412.52. Adapalene is represented by the following structural formula: 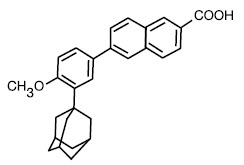 Adapalene acts on retinoid receptors. Biochemical and pharmacological profile studies have demonstrated that adapalene is a modulator of cellular differentiation, keratinization, and inflammatory processes all of which represent important features in the pathology of acne vulgaris.

Mechanistically, adapalene binds to specific retinoic acid nuclear receptors but does not bind to the cytosolic receptor protein. Although the exact mode of action of adapalene is unknown, it is suggested that topical adapalene normalizes the differentiation of follicular epithelial cells resulting in decreased microcomedone formation.

Absorption of adapalene from adapalene cream through human skin is low. In a pharmacokinetic study with six acne patients treated once daily for 5 days with 2 grams of adapalene cream applied to 1000 cm2 of acne involved skin, there were no quantifiable amounts (limit of quantification = 0.35 ng/mL) of adapalene in the plasma samples from any patient. Excretion appears to be primarily by the biliary route.

Adapalene cream is indicated for the topical treatment of acne vulgaris.

Two vehicle-controlled clinical studies were conducted in patients 12 to 30 years of age with mild to moderate acne vulgaris, in which adapalene cream was compared with its vehicle. Patients were instructed to apply their treatment medication once daily at bedtime for 12 weeks. In one study patients were provided with a soapless cleanser and were encouraged to refrain from using moisturizers. No other topical medications, other than adapalene cream, were to be applied to the face during the studies. Adapalene cream was significantly more effective than its vehicle in the reduction of acne lesion counts. The mean percent reduction in lesion counts from baseline after treatment for 12 weeks are presented in the following table:

The trend in the Investigator's global assessment of severity supported the efficacy of adapalene cream when compared to the cream vehicle.

Adapalene cream should not be administered to individuals who are hypersensitive to adapalene or any of the components in the cream vehicle.

Certain cutaneous signs and symptoms of treatment such as erythema, dryness, scaling, burning, or pruritus may be experienced with use of adapalene cream. These are most likely to occur during the first two to four weeks of treatment, are mostly mild to moderate in intensity, and usually lessen with continued use of the medication. Depending upon the severity of these side effects, patients should be instructed to reduce the frequency of application or discontinue use.

If a reaction suggesting sensitivity or chemical irritation occurs, use of the medication should be discontinued. Exposure to sunlight, including sunlamps, should be minimized during use of adapalene. Patients who normally experience high levels of sun exposure, and those with inherent sensitivity to sun, should be warned to exercise caution. Use of sunscreen products and protective clothing over treated areas is recommended when exposure cannot be avoided. Weather extremes, such as wind or cold, also may be irritating to patients under treatment with adapalene.

Avoid contact with the eyes, lips, angles of the nose, and mucous membranes. The product should not be applied to cuts, abrasions, eczematous or sunburned skin. As with other retinoids, use of "waxing" as a depilatory method should be avoided on skin treated with adapalene.

1.
This medication is to be used only as directed by the physician.
2.
It is for external use only.
3.
Avoid contact with the eyes, lips, angles of the nose, and mucous membranes.
4.
Cleanse area with a mild or soapless cleanser before applying this medication.
5.
Moisturizers may be used if necessary, however, products containing alpha hydroxyl or glycolic acids should be avoided.
6.
Exposure of the eye to this medication may result in reactions such as swelling, conjunctivitis, and eye irritation.
7.
This medication should not be applied to cuts, abrasions, eczematous or sunburned skin.
8.
Wax epilation should not be performed on treated skin due to the potential for skin erosions.
9.
During the early weeks of therapy, an apparent exacerbation of acne may occur. This is due to the action of this medication on previously unseen lesions and should not be considered a reason to discontinue therapy. Overall clinical benefit may be noticed after two weeks of therapy, but at least eight weeks are required to obtain consistent beneficial effects.

As adapalene cream has the potential to produce local irritation in some patients, concomitant use of other potentially irritating topical products (medicated or abrasive soaps and cleansers, soaps and cosmetics that have a strong drying effect, and products with high concentrations of alcohol, astringents, spices or lime rind) should be approached with caution. Particular caution should be exercised in using preparations containing sulfur, resorcinol, or salicylic acid in combination with adapalene cream. If these preparations have been used, it is advisable not to start therapy with adapalene cream until the effects of such preparations in the skin have subsided.

Carcinogenesis, Mutagenesis, and Impairment of Fertility:

Carcinogenicity studies with adapalene have been conducted in mice at topical doses of 0.4, 1.3, and 4.0 mg/kg/day, and in rats at oral doses of 0.15, 0.5, and 1.5 mg/kg/day. These doses are up to 8 times (mice) and 6 times (rats) in terms of mg/m2/day the maximum potential exposure at the recommended topical human dose (MRHD), assumed to be 2.5 grams adapalene cream, which is approximately 1.5 mg/m2 adapalene. In the oral study, increased incidence of benign and malignant pheochromocytomas in the adrenal medullas of male rats was observed.

No photocarcinogenicity studies were conducted. Animal studies have shown an increased risk of skin neoplasms with the use of pharmacologically similar drugs (e.g., retinoids) when exposed to UV irradiation in the laboratory or to sunlight. Although the significance of these studies to human use is not clear, patients should be advised to avoid or minimize exposure to either sunlight or artificial UV irradiation sources.

Reproductive function and fertility studies were conducted in rats administered oral doses of adapalene in amounts up to 20 mg/kg/day (up to 80 times the MRHD based on mg/m2 comparisons). No effects of adapalene were found on the reproductive performance or fertility of the Fo males or females. There were also no detectable effects on the growth, development and subsequent reproductive function of the F1 generation.

Clinical studies of adapalene cream were conducted in patients 12 to 30 years of age with acne vulgaris and therefore did not include subjects 65 years and older to determine whether they respond differently than younger subjects. Other reported clinical experience has not identified differences in responses between the elderly and younger patients.

In controlled clinical trials, local cutaneous irritation was monitored in 285 acne patients who used adapalene cream once daily for 12 weeks. The frequency and severity of erythema, scaling, dryness, pruritus and burning were assessed during these studies. The incidence of local cutaneous irritation with adapalene cream from the controlled clinical studies is provided in the following table:

Adapalene cream is intended for cutaneous use only. If the medication is applied excessively, no more rapid or better results will be obtained and marked redness, scaling, or skin discomfort may occur. The acute oral toxicity of adapalene cream in mice and rats is greater than 10 mL/kg. Chronic ingestion of the drug may lead to the same side effects as those associated with excessive oral intake of Vitamin A.

Adapalene cream should be applied to affected areas of the skin, once daily at nighttime. A thin film of the cream should be applied to the skin areas where acne lesions appear, using enough to cover the entire affected areas lightly. A mild transitory sensation of warmth or slight stinging may occur shortly after the application of adapalene cream.