FOR DERMATOLOGIC USE ONLY. NOT FOR OPHTHALMIC USE.

Diclofenac sodium has a molecular weight of 318.13.

The CAS number is CAS-15307-79-6. The structural formula is represented below: 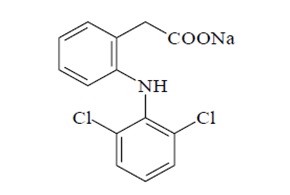 The mechanism of action of diclofenac sodium in the treatment of actinic keratoses (AK) is unknown. The contribution to efficacy of individual components of the vehicle has not been established.

When diclofenac sodium gel is applied topically, diclofenac is absorbed into the epidermis. In a study in patients with compromised skin (mainly atopic dermatitis and other dermatitic conditions) of the hands, arms or face, approximately 10% of the applied dose (2 grams of 3% gel over 100 cm 2) of diclofenac was absorbed systemically in both normal and compromised epidermis after seven days, with four times daily applications.

After topical application of 2 g diclofenac sodium gel three times daily for six days to the calf of the leg in healthy subjects, diclofenac could be detected in plasma. Mean bioavailability parameters were AUC 0-t 9±19 ng/hr/mL (mean±SD) with a C max of 4±5 ng/mL and a T max of 4.5±8 hours. In comparison, a single oral 75 mg dose of diclofenac (Voltaren ®) † produced an AUC of 1600 ng/hr/mL. Therefore, the systemic bioavailability after topical application of diclofenac sodium gel is lower than after oral dosing.

No information is available on the absorption of diclofenac when diclofenac sodium gel is used under occlusion.

Diclofenac and its metabolites are excreted mainly in the urine after oral dosing. Systemic clearance of diclofenac from plasma is 263±56 mL/min (mean±SD). The terminal plasma half-life is 1 to 2 hours. Four of the metabolites also have short terminal half-lives of 1 to 3 hours.

Diclofenac sodium gel is indicated for the topical treatment of actinic keratoses (AK). Sun avoidance is indicated during therapy.

Clinical trials were conducted involving a total of 427 patients (213 treated with diclofenac sodium gel and 214 with a gel vehicle). Each patient had no fewer than five AK lesions in a major body area, which was defined as one of five 5 cm X 5 cm regions: scalp, forehead, face, forearm and hand. Up to three major body areas were studied in any patient. All patients were 18 years of age or older (male and female) with no clinically significant medical problems outside of the AK lesions and had undergone a 60-day washout period from disallowed medications (masoprocol, 5-fluorouracil, cyclosporine, retinoids, trichloroacetic acid/lactic acid/peel, 50% glycolic acid peel) and hyaluronan containing cosmetics. Patients were excluded from participation for reasons of known or suspected hypersensitivity to any diclofenac sodium gel ingredient, pregnancy, allergies to aspirin or other nonsteroidal anti-inflammatory drugs (NSAIDs), or other dermatological conditions which might affect the absorption of the study medication. Application of dermatologic products such as sunscreens, cosmetics, and other drug products was not permitted. Patients were instructed to apply a small amount of diclofenac sodium gel (approximately 0.5 g) onto the affected skin, using their fingers, and gently smoothing the gel over the lesion. In addition, all patients were instructed to avoid sun exposure. Complete clearing of the AK lesions 30 days after completion of treatment was the primary efficacy variable. No long-term patient follow-ups, after the 30-day assessments, were performed for the detection of recurrence.

Diclofenac sodium gel is contraindicated in the following patients:

- In the setting of coronary artery bypass graft (CABG) surgery.

As with other NSAIDs, anaphylactoid reactions may occur in patients without prior exposure to diclofenac. Diclofenac sodium should be given with caution to patients with the aspirin triad. The triad typically occurs in asthmatic patients who experience rhinitis with or without nasal polyps, or who exhibit severe, potentially fatal bronchospasm after taking aspirin or other NSAIDs.

To minimize the potential risk for an adverse CV event in NSAID-treated patients, use the lowest effective dose for the shortest duration possible. Physicians and patients should remain alert for the development of such events, throughout the entire treatment course, even in the absence of previous CV symptoms. Patients should be informed about the symptoms of serious CV events and the steps to take if they occur.

Two large, controlled clinical trials of a COX-2 selective NSAID for the treatment of pain in the first 10 to 14 days following CABG surgery found an increased incidence of myocardial infarction and stroke. NSAIDs are contraindicated in the setting of CABG.

Observational studies conducted in the Danish National Registry have demonstrated that patients treated with NSAIDs in the post-MI period were at increased risk of reinfarction, CV-related death, and all-cause mortality beginning in the first week of treatment. In this same cohort, the incidence of death in the first year post MI was 20 per 100 person years in NSAID-treated patients compared to 12 per 100 person years in non-NSAID exposed patients. Although the absolute rate of death declined somewhat after the first year post-MI, the increased relative risk of death in NSAID users persisted over at least the next four years of follow-up.

Additionally, fluid retention and edema have been observed in some patients treated with NSAIDs. Use of diclofenac may blunt the CV effects of several therapeutic agents used to treat these medical conditions [e.g., diuretics, ACE inhibitors, or angiotensin receptor blockers (ARBs)].

The safety of the concomitant use of sunscreens, cosmetics or other topical medications and diclofenac sodium gel is unknown.

In clinical studies, localized dermal side effects such as contact dermatitis, exfoliation, dry skin and rash were found in patients treated with diclofenac sodium gel at a higher incidence than in those with placebo.

Patients should understand the importance of monitoring and follow-up evaluation, the signs and symptoms of dermal adverse reactions, and the possibility of irritant or allergic contact dermatitis. If severe dermal reactions occur, treatment with diclofenac sodium gel may be interrupted until the condition subsides. Exposure to sunlight and the use of sunlamps should be avoided.

Safety and efficacy of the use of diclofenac sodium gel together with other dermal products, including cosmetics, sunscreens, and other topical medications on the area being treated, have not been studied.

Advise patients to be alert for the symptoms of cardiovascular thrombotic events, including chest pain, shortness of breath, weakness, or slurring of speech, and to report any of these symptoms to their health care provider immediately.

Advise patients to be alert for the symptoms of congestive heart failure including shortness of breath, unexplained weight gain, or edema and to contact their healthcare provider if such symptoms occur.

Specific interaction studies between diclofenac sodium gel and other topical or oral agents were not performed.

Diclofenac was not genotoxic in in vitro point mutation assays in mammalian mouse lymphoma cells and Ames microbial test systems, or when tested in mammalian in vivo assays including dominant lethal and male germinal epithelial chromosomal studies in mice, and nucleus anomaly and chromosomal aberration studies in Chinese hamsters. It was also negative in the transformation assay utilizing BALB/3T3 mouse embryo cells.

Fertility studies have not been conducted with diclofenac sodium gel. Diclofenac sodium showed no evidence of impairment of fertility after oral treatment with 4 mg/kg/day (7 times the estimated systemic human exposure) in male or female rats.

Diclofenac has been shown to cross the placental barrier in mice and rats. There are, however, no adequate and well controlled studies in pregnant women. Because animal reproduction studies are not always predictive of human response, this drug should not be used during pregnancy unless the benefits to the mother justify the potential risk to the fetus. Because of the risk to the fetus resulting in premature closure of the ductus arteriosus, diclofenac should be avoided in late pregnancy.

The effects of diclofenac on labor and delivery in pregnant women are unknown. Because of the known effects of prostaglandin-inhibiting drugs on the fetal cardiovascular system (closure of the ductus arteriosus), use of diclofenac during late pregnancy should be avoided and, as with other nonsteroidal anti-inflammatory drugs, it is possible that diclofenac may inhibit uterine contractions and delay parturition.

Because of the potential for serious adverse reactions in nursing infants from diclofenac sodium, a decision should be made whether to discontinue nursing or to discontinue the drug, taking into account the importance of the drug to the mother.

Actinic keratoses is not a condition seen within the pediatric population. Diclofenac sodium gel should not be used by children.

Of the 211 subjects treated with diclofenac sodium gel in controlled clinical studies, 143 subjects were 65 and over. Of those 143 subjects, 55 subjects were 75 and over. No overall differences in safety or effectiveness were observed between these subjects and younger subjects, and other reported clinical experience has not identified differences in responses between the elderly and younger patients, but greater sensitivity of some older individuals cannot be ruled out.

Of the 423 patients evaluable for safety in adequate and well-controlled trials, 211 were treated with diclofenac sodium gel drug product and 212 were treated with a vehicle gel. Eighty-seven percent (87%) of the diclofenac sodium gel treated patients (183 patients) and 84% of the vehicle-treated patients (178 patients) experienced one or more adverse events (AEs) during the studies. The majority of these reactions were mild to moderate in severity and resolved upon discontinuation of therapy.

Eighteen percent of diclofenac sodium gel treated patients and 4% of vehicle-treated patients discontinued from the clinical trials due to adverse events (whether considered related to treatment or not). These discontinuations were mainly due to skin irritation or related cutaneous adverse reactions.

Table 1 below presents the AEs reported at an incidence of >1% for patients treated with either diclofenac sodium gel or vehicle (60- and 90-day treatment groups) during the phase 3 studies.

Due to the low systemic absorption of topically-applied diclofenac sodium gel, overdosage is unlikely. There have been no reports of ingestion of diclofenac sodium gel. In the event of oral ingestion, resulting in significant systemic side effects, it is recommended that the stomach be emptied by vomiting or lavage. Forced diuresis may theoretically be beneficial because the drug is excreted in the urine. The effect of dialysis or hemoperfusion in the elimination of diclofenac (99% protein-bound) remains unproven. In addition to supportive measures, the use of oral activated charcoal may help to reduce the absorption of diclofenac. Supportive and symptomatic treatment should be given for complications such as renal failure, convulsions, gastrointestinal irritation and respiratory depression.

Diclofenac Sodium Gel, 3% is applied to lesion areas twice daily. It is to be smoothed onto the affected skin gently. The amount needed depends upon the size of the lesion site. Assure that enough diclofenac sodium gel is applied to adequately cover each lesion. Normally 0.5 g of gel is used on each 5 cm x 5 cm lesion site. The recommended duration of therapy is from 60 days to 90 days. Complete healing of the lesion(s) or optimal therapeutic effect may not be evident for up to 30 days following cessation of therapy. Lesions that do not respond to therapy should be carefully re-evaluated and management reconsidered.

†Voltaren® is a registered trademark of Novartis.