BENZONATATE acts peripherally by anesthetizing the stretch receptors located in the respiratory passages, lungs, and pleura by dampening their activity and thereby reducing the cough reflex at its source. It begins to act within 15 to 20 minutes and its effect lasts for 3 to 8 hours. BENZONATATE has no inhibitory effect on the respiratory center in recommended dosage.

BENZONATATE is indicated for the symptomatic relief of cough.

Hypersensitivity to benzonatate or related compounds.

Severe hypersensitivity reactions (including bronchospasm, laryngospasm and cardiovascular collapse) have been reported which are possibly related to local anesthesia from sucking or chewing the capsule instead of swallowing it. Severe reactions have required intervention with vasopressor agents and supportive measures.

Isolated instances of bizarre behavior, including mental confusion and visual hallucinations, have also been reported in patients taking BENZONATATE in combination with other prescribed drugs.

Accidental Ingestion and Death in Children

Benzonatate is chemically related to anesthetic agents of the para-amino-benzoic acid class (e.g. procaine; tetracaine) and has been associated with adverse CNS effects possibly related to a prior sensitivity to related agents or interaction with concomitant medication.

Swallow BENZONATATE Capsules whole. Do not break, chew, dissolve, cut, or crush BENZONATATE capsules. Release of BENZONATATE from the capsule in the mouth can produce a temporary local anesthesia of the oral mucosa and choking could occur. If numbness or tingling of the tongue, mouth, throat, or face occurs, refrain from oral ingestion of food or liquids until the numbness has resolved. If the symptoms worsen or persist, seek medical attention.

Overdosage resulting in death may occur in adults.

Do not exceed a single dose of 200 mg and a total daily dosage of 600 mg. If you miss a dose of BENZONATATE, skip that dose and take the next dose at the next scheduled time. Do not take 2 doses of BENZONATATE at one time.

Carcinogenicity, mutagenicity, and reproduction studies have not been conducted with BENZONATATE.

Potential Adverse Reactions to BENZONATATE may include:

Other: nasal congestion; sensation of burning in the eyes; vague "chilly" sensation; numbness of the chest; hypersensitivity.

Deliberate or accidental overdose has resulted in death, particularly in children.

Intentional and unintentional overdose may result in death, particularly in children.

The drug is chemically related to tetracaine and other topical anesthetics and shares various aspects of their pharmacology and toxicology. Drugs of this type are generally well absorbed after ingestion.

The signs and symptoms of overdose of benzonatate have been reported within 15-20 minutes. If capsules are chewed or dissolved in the mouth, oropharyngeal anesthesia will develop rapidly, which may cause choking and airway compromise.

CNS stimulation may cause restlessness and tremors which may proceed to clonic convulsions followed by profound CNS depression. Convulsions, coma, cerebral edema and cardiac arrest leading to death have been reported within 1 hour of ingestion.

In case of overdose, seek medical attention immediately. Evacuate gastric contents and administer copious amounts of activated charcoal slurry. Even in the conscious patient, cough and gag reflexes may be so depressed as to necessitate special attention to protection against aspiration of gastric contents and orally administered materials. Convulsions should be treated with a short-acting barbiturate given intravenously and carefully titrated for the smallest effective dosage. Intensive support of respiration and cardiovascular-renal function is an essential feature of the treatment of severe intoxication from overdosage.

Do not use CNS stimulants.

Adults and Children over 10 years of age: Usual dose is one 100 mg or 200 mg capsule three times a day as needed for cough. If necessary to control cough, up to 600 mg daily in three divided doses may be given. BENZONATATE should be swallowed whole. BENZONATATE Capsules are not to be broken, chewed, dissolved, cut or crushed. 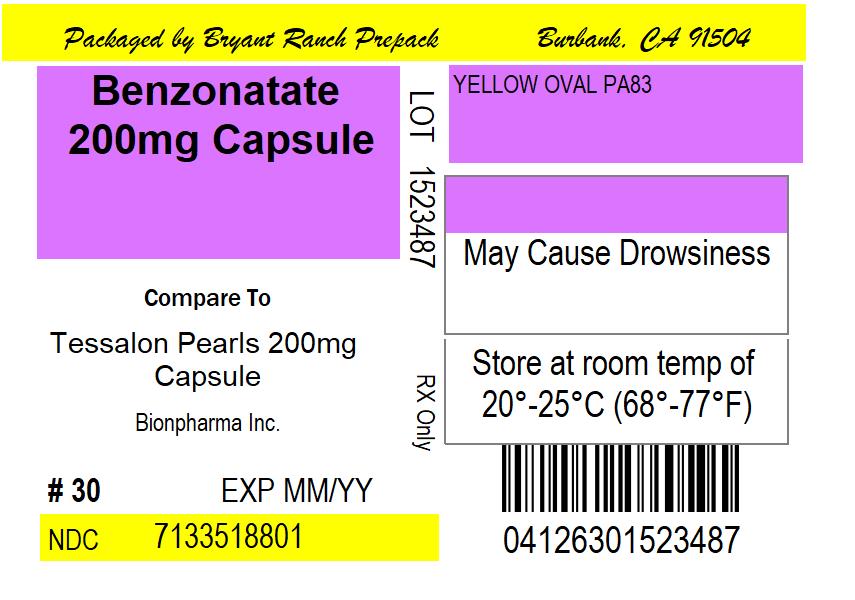