Sufficient Indigo Carmine is contained in each 5 mL ampule to permit accurate withdrawal and administration of the full dose. It gives a deep blue solution when dissolved in water.

Indigo Carmine is excreted largely by the kidneys, retaining its blue color during passage through the body.

Originally employed as a kidney function test, the chief application of Indigo Carmine at present is localizing ureteral orifices during cystoscopy and ureteral catheterization.

Indigo Carmine is contraindicated in patients who have previously experienced an adverse reaction following its use.

An occasional idiosyncratic drug reaction may occur. A mild pressor effect may be encountered in some patients.

Indigo Carmine is not a controlled substance listed in any of the Drug Enforcement Administration Schedules. Its use is not known to lead to dependence or abuse.

There are no data available describing the signs, symptoms or laboratory findings accompanying overdosage.

No discernible symptoms of toxicity have been observed in mice with an intravenous dose of 200 mg/kg. After intravenous administration the LD50 was established at 300 mg/kg in mice.

Indigo Carmine solution is injected either by the intravenous or intramuscular route, and its appearance at the ureteral orifices is watched with the cystoscope in place. The intravenous method is preferred because a 5 mL injection is sufficient. A lesser dosage in infants, children and underweight patients will prevent skin coloration.

Since precipitation of indigotindisulfonate sodium may occur, Indigo Carmine Solution must not be diluted prior to injection or injected with infusion assemblies which were used with other solutions.

NOTE: Since Indigo Carmine is a dark blue solution, visual inspection for particulate matter prior to use may not be possible.  To ensure that the withdrawn solution contains no particulates, 5 micron filter straws/filter needles must be used when withdrawing contents of ampules1.  The 5 micron nylon mesh filter is suitable for withdrawing the drug product, Indigo Carmine.

PROTECT FROM LIGHT. Indigo Carmine should be stored in the dark, away from direct light, preferably in the original package. 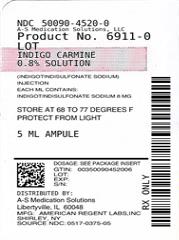