Acetazolamide for Injection, USP
(For Intravenous Use Only)

Acetazolamide for injection, USPis available for intravenous use, and is supplied as a sterile, white or almost white to faintly yellowish white lyophilized powder or plug requiring reconstitution. Each vial contains an amount of acetazolamide sodium equivalent to 500 mg of acetazolamide, USP. The bulk solution is adjusted to pH 9.2 using sodium hydroxide and, if necessary, hydrochloric acid prior to lyophilization.

Acetazolamide is a potent carbonic anhydrase inhibitor, effective in the control of fluid secretion (e.g., some types of glaucoma), in the treatment of certain convulsive disorders (e.g., epilepsy) and in the promotion of diuresis in instances of abnormal fluid retention (e.g., cardiac edema).

Acetazolamide is an enzyme inhibitor that acts specifically on carbonic anhydrase, the enzyme that catalyzes the reversible reaction involving the hydration of carbon dioxide and the dehydration of carbonic acid. In the eye, this inhibitory action of acetazolamide decreases the secretion of aqueous humor and results in a drop in intraocular pressure, a reaction considered desirable in cases of glaucoma and even in certain nonglaucomatous conditions. Evidence seems to indicate that acetazolamide has utility as an adjuvant in the treatment of certain dysfunctions of the central nervous system (e.g., epilepsy). Inhibition of carbonic anhydrase in this area appears to retard abnormal, paroxysmal, excessive discharge from central nervous system neurons. The diuretic effect of acetazolamide is due to its action in the kidney on the reversible reaction involving hydration of carbon dioxide and dehydration of carbonic acid. The result is renal loss of HCO3 ion, which carries out sodium, water, and potassium. Alkalinization of the urine and promotion of diuresis are thus affected. Alteration in ammonia metabolism occurs due to increased reabsorption of ammonia by the renal tubules as a result of urinary alkalinization.

Placebo-controlled clinical trials have shown that prophylactic administration of acetazolamide at a dose of 250 mg every eight to 12 hours (or a 500 mg controlled-release capsule once daily) before and during rapid ascent to altitude results in fewer and/or less severe symptoms (such as headache, nausea, shortness of breath, dizziness, drowsiness, and fatigue) of acute mountain sickness (AMS). Pulmonary function (e.g., minute ventilation, expired vital capacity, and peak flow) is greater in the acetazolamide treated group, both in subjects with AMS and asymptomatic subjects. The acetazolamide treated climbers also had less difficulty in sleeping.

Long-term administration of acetazolamide is contraindicated in patients with chronic noncongestive angle-closure glaucoma since it may permit organic closure of the angle to occur while the worsening glaucoma is masked by lowered intraocular pressure.

Fatalities have occurred, although rarely, due to severe reactions to sulfonamides including Stevens-Johnson syndrome, toxic epidermal necrolysis, fulminant hepatic necrosis, agranulocytosis, aplastic anemia, and other blood dyscrasias, and anaphylaxis. Sensitizations may recur when a sulfonamide is readministered irrespective of the route of administration. If signs of hypersensitivity or other serious reactions occur, discontinue use of this drug.

In patients with pulmonary obstruction or emphysema where alveolar ventilation may be impaired, acetazolamide, which may precipitate or aggravate acidosis, should be used with caution.

Gradual ascent is desirable to try to avoid acute mountain sickness. If rapid ascent is undertaken and acetazolamide is used, it should be noted that such use does not obviate the need for prompt descent if severe forms of high altitude sickness occur, i.e., high altitude pulmonary edema (HAPE) or high altitude cerebral edema.

Both increases and decreases in blood glucose levels have been described in patients treated with acetazolamide. This should be taken into consideration in patients with impaired glucose tolerance or diabetes mellitus.

By decreasing the gastrointestinal absorption of primidone, acetazolamide may decrease serum concentrations of primidone and its metabolites, with a consequent possible decrease in anticonvulsant effect. Caution is advised when beginning, discontinuing, or changing the dose of acetazolamide in patients receiving primidone.

Acetazolamide may increase or decrease blood glucose levels. Consideration should be taken in patients being treated with antidiabetic agents.

Long-term studies in animals to evaluate the carcinogenic potential of acetazolamide have not been conducted. In a bacterial mutagenicity assay, acetazolamide was not mutagenic when evaluated with and without metabolic activation.

The safety and effectiveness of acetazolamide in pediatric patients have not been established.

Clinical studies of acetazolamide did not include sufficient numbers of subjects aged 65 and over to determine whether they respond differently from younger subjects. Other reported clinical experience has not identified differences in responses between the elderly and younger patients. In general, dose selection for an elderly patient should be cautious, usually starting at the low end of the dosing range, reflecting the greater frequency of decreased hepatic, renal, or cardiac function, and of concomitant disease or other drug therapy.

Special senses: Hearing disturbances, tinnitus, transient myopia. Transient myopia is the result of forward movement of the ciliary body leading to a narrowing of the angle.

No specific antidote is known. Treatment should be symptomatic and supportive.

Electrolyte imbalance, development of an acidotic state, and central nervous effects might be expected to occur. Serum electrolyte levels (particularly potassium) and blood pH levels should be monitored.

Supportive measures are required to restore electrolyte and pH balance. The acidotic state can usually be corrected by the administration of bicarbonate.

Despite its high intraerythrocytic distribution and plasma protein binding properties, acetazolamide is dialyzable. This may be particularly important in the management of acetazolamide overdosage when complicated by the presence of renal failure.

Preparation and Storage of Parenteral Solution

Each 500 mg vial containing Acetazolamide for Injection should be reconstituted with at least 5 mL of Sterile Water for Injection prior to use. Reconstituted solutions retain their physical and chemical properties for 3 days under refrigeration at 2° to 8°C (36° to 46°F), or 12 hours at room temperature 20°C to 25°C (68° to 77°F). CONTAINS NO PRESERVATIVE. The direct intravenous route of administration is preferred. Intramuscular administration is not recommended.

Acetazolamide for injection should be used as an adjunct to the usual therapy. The dosage employed in the treatment of chronic simple (open-angle) glaucoma ranges from 250 mg to 1 g of acetazolamide for injection per 24 hours, usually in divided doses for amounts over 250 mg. It has usually been found that a dosage in excess of 1 g per 24 hours does not produce an increased effect. In all cases, the dosage should be adjusted with careful individual attention both to symptomatology and ocular tension. Continuous supervision by a physician is advisable.

In treatment of secondary glaucoma and in the preoperative treatment of some cases of acute congestive (closed-angle) glaucoma, the preferred dosage is 250 mg every four hours, although some cases have responded to 250 mg twice daily on short-term therapy. In some acute cases, it may be more satisfactory to administer an initial dose of 500 mg followed by 125 mg or 250 mg every four hours depending on the individual case. Intravenous therapy may be used for rapid relief of ocular tension in acute cases. A complementary effect has been noted when acetazolamide for injection has been used in conjunction with miotics or mydriatics as the case demanded.

It is not clearly known whether the beneficial effects observed in epilepsy are due to direct inhibition of carbonic anhydrase in the central nervous system or whether they are due to the slight degree of acidosis produced by the divided dosage. The best results to date have been seen in petit mal in pediatric patients. Good results, however, have been seen in patients, both pediatric patients and adult, in other types of seizures such as grand mal, mixed seizure patterns, myoclonic jerk patterns, etc. The suggested total daily dose is 8 mg to 30 mg per kg in divided doses. Although some patients respond to a low dose, the optimum range appears to be from 375 mg to 1000 mg daily. However, some investigators feel that daily doses in excess of 1 g do not produce any better results than a 1 g dose. When acetazolamide for injection is given in combination with other anticonvulsants, it is suggested that the starting dose should be 250 mg once daily in addition to the existing medications. This can be increased to levels as indicated above.

The change from other medications to acetazolamide for injection should be gradual and in accordance with usual practice in epilepsy therapy.

For diuresis in congestive heart failure, the starting dose is usually 250 mg to 375 mg once daily in the morning (5 mg/kg). If, after an initial response, the patient fails to continue to lose edema fluid, do not increase the dose but allow for kidney recovery by skipping medication for a day. Acetazolamide for injection yields best diuretic results when given on alternate days, or for two days alternating with a day of rest.

Failures in therapy may be due to overdosage or too frequent dosage. The use of acetazolamide for injection does not eliminate the need for other therapy such as digitalis, bed rest, and salt restriction.

Recommended dosage is 250 mg to 375 mg of acetazolamide for injection once a day for one or two days, alternating with a day of rest.

Note: The dosage recommendations for glaucoma and epilepsy differ considerably from those for congestive heart failure, since the first two conditions are not dependent upon carbonic anhydrase inhibition in the kidney which requires intermittent dosage if it is to recover from the inhibitory effect of the therapeutic agent.

Sulfonamides may give false negative or decreased values for urinary phenolsulfonphthalein and phenol red elimination values for urinary protein, serum non-protein and for serum uric acid. Acetazolamide may produce an increased level of crystals in the urine.

Acetazolamide for injection, USP (lyophilized) powder is supplied as follows:

Use within 12 hours of reconstitution. Discard unused portion. 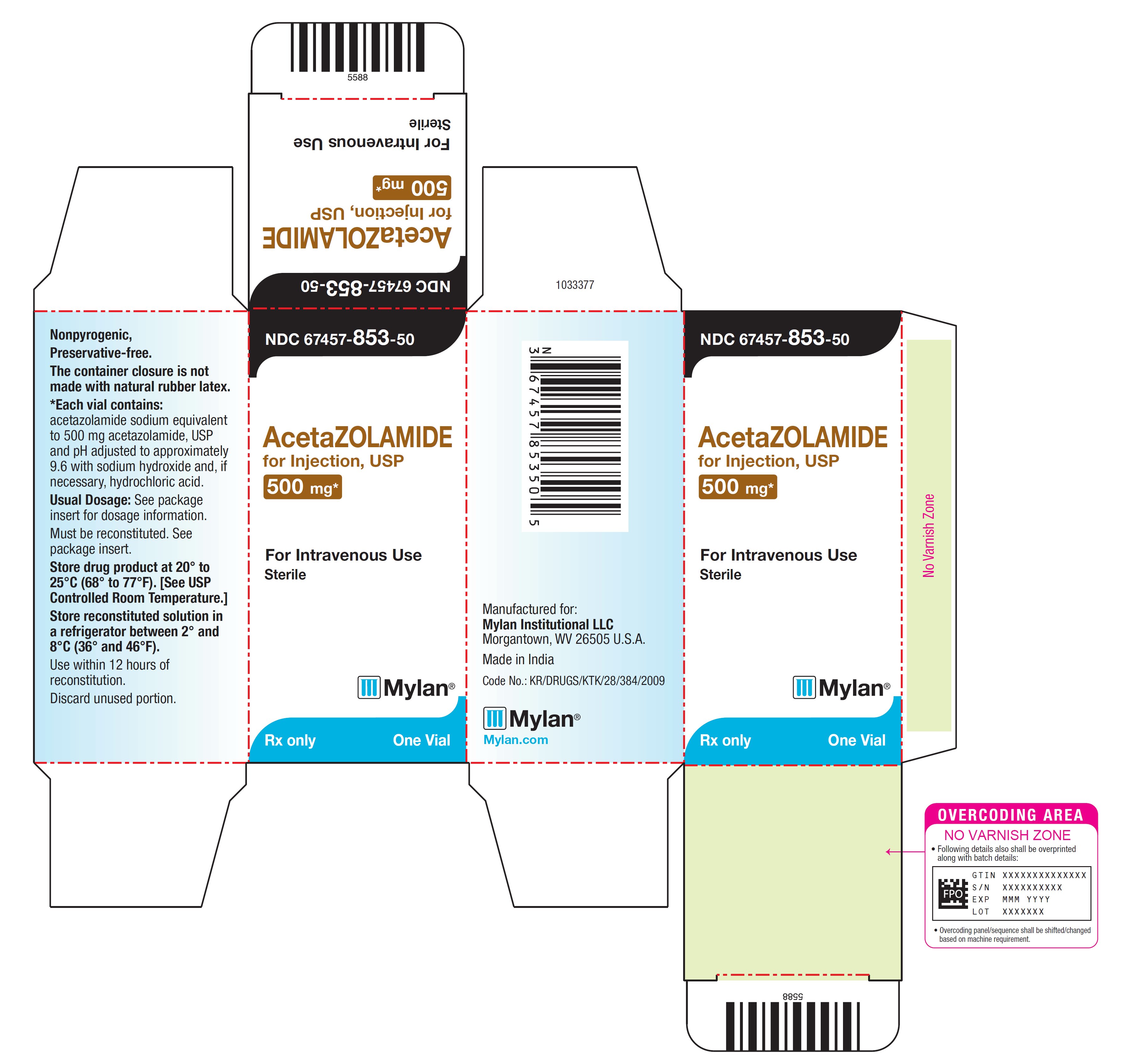