It is designated chemically as 3∝-(Diphenylmethoxy)-1∝H, 5∝H-tropane methanesulfonate. Its molecular formula is C21H25NO•CH4O3S, and its structural formula is:

For use as an adjunct in the therapy of all forms of parkinsonism.

Useful also in the control of extrapyramidal disorders (except tardive dyskinesia - see PRECAUTIONS) due to neuroleptic drugs (e.g., phenothiazines).

Treatment - Physostigmine salicylate, 1 to 2 mg, SC or IV, reportedly will reverse symptoms of anticholinergic intoxication.* A second injection may be given after 2 hours if required. Otherwise treatment is symptomatic and supportive. Induce emesis or perform gastric lavage (contraindicated in precomatose, convulsive, or psychotic states). Maintain respiration. A short-acting barbiturate may be used for CNS excitement, but with caution to avoid subsequent depression; supportive care for depression (avoid convulsant stimulants such as picrotoxin, pentylenetetrazol, or bemegride); artificial respiration for severe respiratory depression; a local miotic for mydriasis and cycloplegia; ice bags or other cold applications and alcohol sponges for hyperpyrexia, a vasopressor and fluids for circulatory collapse. Darken room for photophobia.

Drug-Induced Extrapyramidal Disorders–In treating extrapyramidal disorders due to neuroleptic drugs (e.g., phenothiazines), the recommended dosage is 1 to 4 mg once or twice a day orally or parenterally. Dosage must be individualized according to the need of the patient. Some patients require more than recommended; others do not need as much.

Benztropine Mesylate Tablets, USP, for oral use, are supplied in the following forms:

As 2 mg: Compressed tablet, white, 9/32" diameter, flat beveled edge; one side scored and debossed 832 and BM2, one side plain. 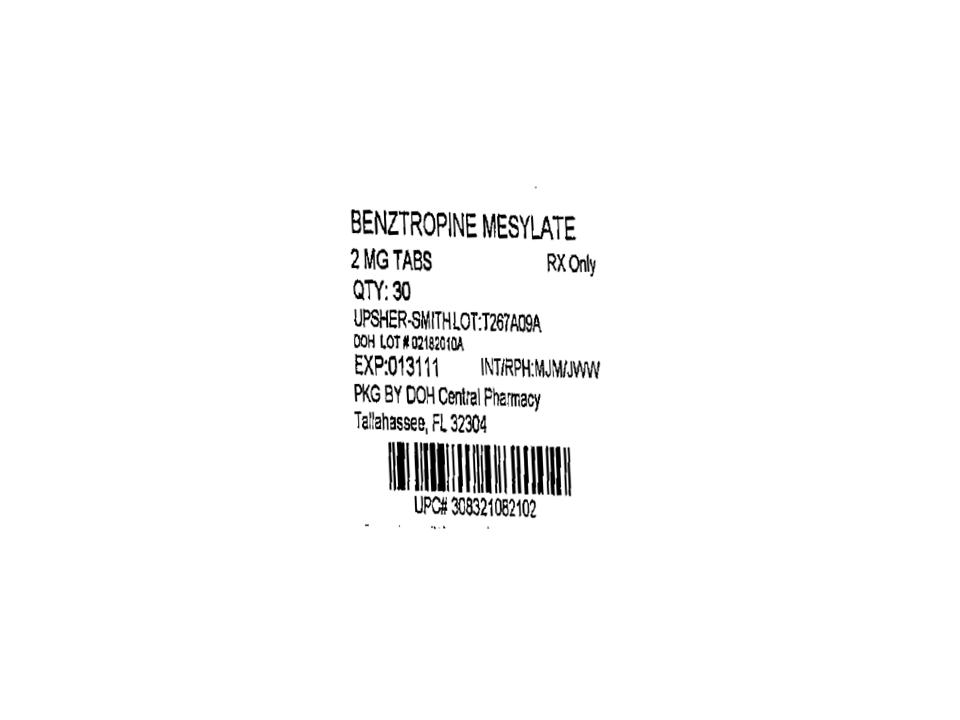