Leucovorin is one of several active, chemically reduced derivatives of folic acid. It is useful as an antidote to drugs which act as folic acid antagonists.

There is 0.004 mEq of calcium per mg of leucovorin. Solution contains no bacteriostat or antimicrobial agents.

In a randomized clinical study conducted by the Mayo Clinic and the North Central Cancer Treatment Group (Mayo/NCCTG) in patients with advanced metastatic colorectal cancer three treatment regimens were compared: Leucovorin (LV) 200 mg/m2 and 5-fluorouracil (5-FU) 370 mg/m2 versus LV 20 mg/m2 and 5-FU 425 mg/m2 versus 5-FU 500 mg/m2. All drugs were administered by slow intravenous infusion daily for 5 days repeated every 28 to 35 days. Response rates were 26% (p=0.04 versus 5-FU alone), 43% (p=0.001 versus 5-FU alone) and 10% for the high dose leucovorin, low dose leucovorin and 5-FU alone groups respectively. Respective median survival times were 12.2 months (p=0.037), 12 months (p=0.050), and 7.7 months. The low dose LV regimen gave a statistically significant improvement in weight gain of more than 5%, relief of symptoms, and improvement in performance status. The high dose LV regimen gave a statistically significant improvement in performance status and trended toward improvement in weight gain and in relief of symptoms but these were not statistically significant.


Leucovorin is improper therapy for pernicious anemia and other megaloblastic anemias secondary to the lack of vitamin B12. A hematologic remission may occur while neurologic manifestations continue to progress.


Patients being treated with the leucovorin/5-fluorouracil combination should have a CBC with differential and platelets prior to each treatment. During the first two courses a CBC with differential and platelets has to be repeated weekly and thereafter once each cycle at the time of anticipated WBC nadir. Electrolytes and liver function tests should be performed prior to each treatment for the first three cycles then prior to every other cycle. Dosage modifications of fluorouracil should be instituted as follows (Table 1), based on the most severe toxicities:
Table 1:  Dosage modifications for fluorouracil


Folic acid in large amounts may counteract the antiepileptic effect of phenobarbital, phenytoin and primidone, and increase the frequency of seizures in susceptible pediatric patients.


Clinical studies of leucovorin calcium did not show differences in safety or effectiveness between subjects over 65 and younger subjects. Other clinical experience has not identified differences in responses between the elderly and younger patients, but greater sensitivity of some older patients cannot be ruled out. This drug is known to be excreted by the kidney and the risk of toxic reactions to the drug may be greater in patients with impaired renal function. Because elderly patients are more likely to have decreased renal function, care should be taken in dose selection in this patient population.


Allergic sensitization, including anaphylactoid reactions and urticaria, has been reported following the administration of both oral and parenteral leucovorin. Anaphylactic reactions, including shock, have been reported. No other adverse reactions have been attributed to the use of leucovorin per se.

The leucovorin dose should be adjusted or leucovorin rescue extended based on the following guidelines (Table 3):

DO NOT ADMINISTER LEUCOVORIN INTRATHECALLY


Excessive amounts of leucovorin may nullify the chemotherapeutic effect of folic acid antagonists.

Leucovorin Rescue After High-Dose Methotrexate Therapy
The recommendations for leucovorin rescue are based on a methotrexate dose of 12 to 15 grams/m2 administered by intravenous infusion over 4 hours (see methotrexate package insert for full prescribing information).

Serum creatinine and methotrexate levels should be determined at least once daily. Leucovorin administration, hydration, and urinary alkalization (pH of 7.0 or greater) should be continued until the methotrexate level is below 5 x 10-8 M (0.05 micromolar).

Megaloblastic Anemia Due to Folic Acid Deficiency
Up to 1 mg daily. There is no evidence that doses greater than 1 mg/day have greater efficacy than those of 1 mg; additionally, loss of folate in urine becomes roughly logarithmic as the amount administered exceeds 1 mg.


Leucovorin Calcium Injection USP, 10 mg per mL, is supplied in sterile, single use vials as follows:


Store in refrigerator 2° to 8°C (36° to 46°F). Protect from light. Discard unused portion. Retain in carton until time of use.

50 mL Single Use Vial  Rx only

Leucovorin
Calcium
Injection, USP
500 mg* per 50 mL
(10 mg per mL)
For Intravenous or Intramuscular Use

Rx only
50 mL Single Use Vial 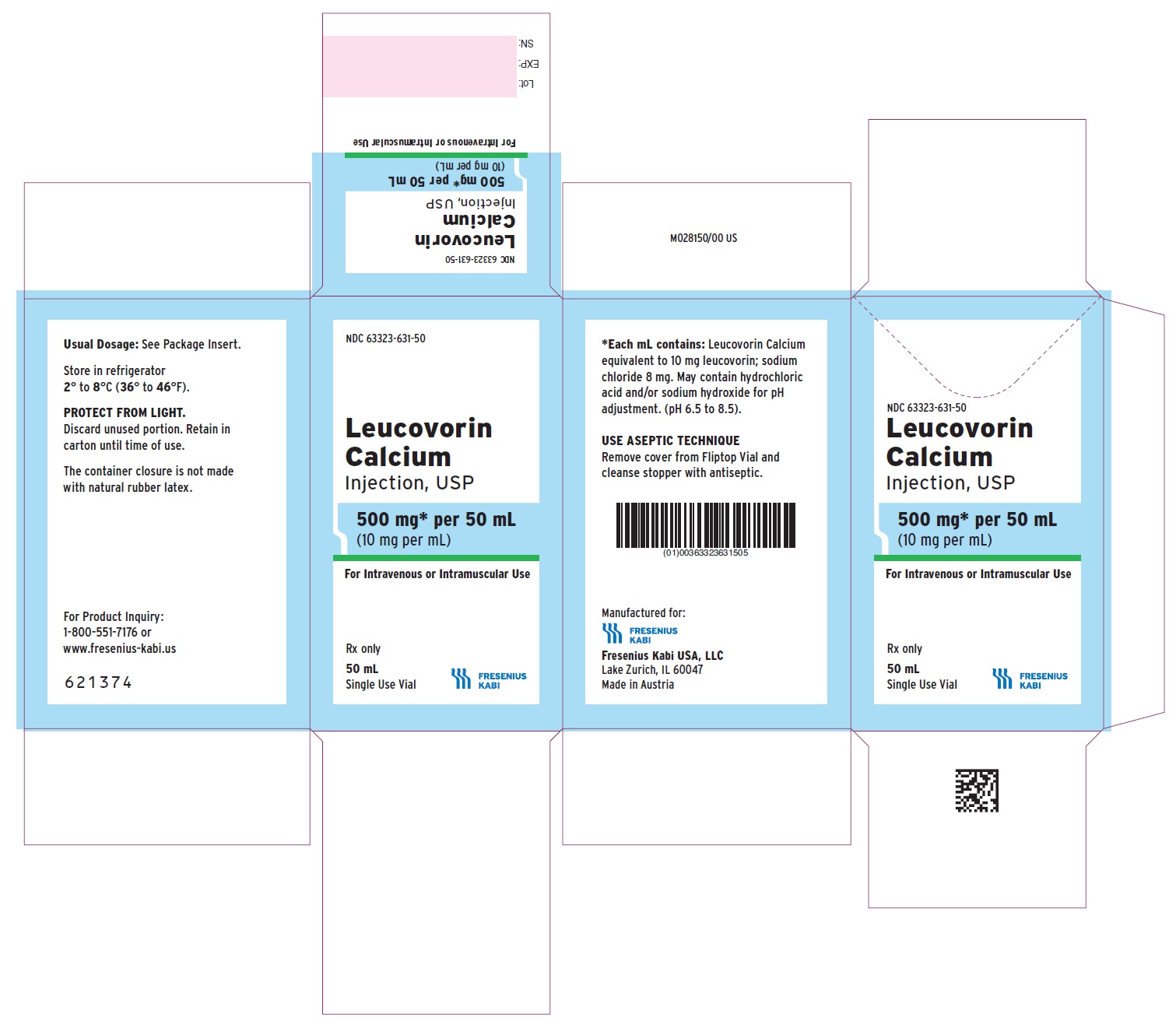