Nizatidine USP is a histamine H2-receptor antagonist. Chemically, it is N-[2-[[[2-[(Dimethylamino)methyl]-4-thiazolyl]methyl]thio]ethyl]-N'-methyl-2-nitro-1,1-ethenediamine. The structural formula is represented below:

2. Effects on Other Gastrointestinal Secretions – Pepsin: Oral administration of 75 to 300 mg of nizatidine did not affect pepsin activity in gastric secretions. Total pepsin output was reduced in proportion to the reduced volume of gastric secretions.

Serum Gastrin: Nizatidine had no effect on basal serum gastrin. No rebound of gastrin secretion was observed when food was ingested 12 hours after administration of nizatidine.

4. Pharmacokinetics – The absolute oral bioavailability of nizatidine exceeds 70%. Peak plasma concentrations (700 to 1,800 mcg/L for a 150 mg dose and 1,400 to 3,600 mcg/L for a 300 mg dose) occur from 0.5 to 3 hours following the dose. A concentration of 1,000 mcg/L is equivalent to 3 mcmol/L; a dose of 300 mg is equivalent to 905 mcmoles. Plasma concentrations 12 hours after administration are less than 10 mcg/L. The elimination half-life is 1 to 2 hours, plasma clearance is 40 to 60 L/h, and the volume of distribution is 0.8 to 1.5 L/kg. Because of the short half-life and rapid clearance of nizatidine, accumulation of the drug would not be expected in individuals with normal renal function who take either 300 mg once daily at bedtime or 150 mg twice daily. Nizatidine exhibits dose proportionality over the recommended dose range.

2. Maintenance of Healed Duodenal Ulcer: Treatment with a reduced dose of nizatidine has been shown to be effective as maintenance therapy following healing of active duodenal ulcers. In multicenter, double-blind, placebo-controlled studies conducted in the United States, 150 mg of nizatidine taken at bedtime resulted in a significantly lower incidence of duodenal ulcer recurrence in patients treated for up to 1 year (Table 3).

* P-values are one-sided, obtained by Chi-square test, and not adjusted for multiple comparisons.

General – 1. Symptomatic response to nizatidine therapy does not preclude the presence of gastric malignancy.

2. Because nizatidine is excreted primarily by the kidney, dosage should be reduced in patients with moderate to severe renal insufficiency (see DOSAGE AND ADMINISTRATION).

Laboratory Tests – False-positive tests for urobilinogen with Multistix® may occur during therapy with nizatidine.

Drug Interactions – No interactions have been observed between nizatidine and theophylline, chlordiazepoxide, lorazepam, lidocaine, phenytoin, and warfarin. Nizatidine does not inhibit the cytochrome P-450-linked drug-metabolizing enzyme system; therefore, drug interactions mediated by inhibition of hepatic metabolism are not expected to occur. In patients given very high doses (3,900 mg) of aspirin daily, increases in serum salicylate levels were seen when nizatidine, 150 mg b.i.d., was administered concurrently.

Carcinogenesis, Mutagenesis, Impairment of Fertility – A 2-year oral carcinogenicity study in rats with doses as high as 500 mg/kg/day (about 80 times the recommended daily therapeutic dose) showed no evidence of a carcinogenic effect. There was a dose-related increase in the density of enterochromaffin-like (ECL) cells in the gastric oxyntic mucosa. In a 2-year study in mice, there was no evidence of a carcinogenic effect in male mice; although hyperplastic nodules of the liver were increased in the high-dose males as compared with placebo. Female mice given the high dose of nizatidine (2,000 mg/kg/day, about 330 times the human dose) showed marginally statistically significant increases in hepatic carcinoma and hepatic nodular hyperplasia with no numerical increase seen in any of the other dose groups. The rate of hepatic carcinoma in the high-dose animals was within the historical control limits seen for the strain of mice used. The female mice were given a dose larger than the maximum tolerated dose, as indicated by excessive (30%) weight decrement as compared with concurrent controls and evidence of mild liver injury (transaminase elevations). The occurrence of a marginal finding at high dose only in animals given an excessive and somewhat hepatotoxic dose, with no evidence of a carcinogenic effect in rats, male mice, and female mice (given up to 360 mg/kg/day, about 60 times the human dose), and a negative mutagenicity battery are not considered evidence of a carcinogenic potential for nizatidine.

Nursing Mothers – Studies conducted in lactating women have shown that 0.1% of the administered oral dose of nizatidine is secreted in human milk in proportion to plasma concentrations. Because of the growth depression in pups reared by lactating rats treated with nizatidine, a decision should be made whether to discontinue nursing or discontinue the drug, taking into account the importance of the drug to the mother.

Pediatric Use – Safety and effectiveness in pediatric patients have not been established.

Geriatric Use – Of the 955 patients in clinical studies who were treated with nizatidine, 337 (35.3%) were 65 and older. No overall differences in safety or effectiveness were observed between these and younger subjects. Other reported clinical experience has not identified differences in responses between the elderly and younger patients, but greater sensitivity of some older individuals cannot be ruled out.

Incidence in Placebo-Controlled Clinical Trials in the United States and Canada – Table 5 lists adverse events that occurred at a frequency of 1% or more among nizatidine-treated patients who participated in placebo-controlled trials. The cited figures provide some basis for estimating the relative contribution of drug and nondrug factors to the side effect incidence rate in the population studied.

Hepatic – Hepatocellular injury, evidenced by elevated liver enzyme tests (SGOT [AST], SGPT [ALT], or alkaline phosphatase), occurred in some patients and was possibly or probably related to nizatidine. In some cases there was marked elevation of SGOT, SGPT enzymes (greater than 500 IU/L) and, in a single instance, SGPT was greater than 2,000 IU/L. The overall rate of occurrences of elevated liver enzymes and elevations to 3 times the upper limit of normal, however, did not significantly differ from the rate of liver enzyme abnormalities in placebo-treated patients. All abnormalities were reversible after discontinuation of nizatidine. Since market introduction, hepatitis and jaundice have been reported. Rare cases of cholestatic or mixed hepatocellular and cholestatic injury with jaundice have been reported with reversal of the abnormalities after discontinuation of nizatidine.

CNS – Rare cases of reversible mental confusion have been reported.

Endocrine – Clinical pharmacology studies and controlled clinical trials showed no evidence of anti-androgenic activity due to nizatidine. Impotence and decreased libido were reported with similar frequency by patients who received nizatidine and by those given placebo. Rare reports of gynecomastia occurred.

Integumental – Sweating and urticaria were reported significantly more frequently in nizatidine- than in placebo-treated patients. Rash and exfoliative dermatitis were also reported. Vasculitis has been reported rarely.

Body as a Whole – Serum sickness-like reactions have occurred rarely in conjunction with nizatidine use.

Genitourinary – Reports of impotence have occurred.

Other – Hyperuricemia unassociated with gout or nephrolithiasis was reported. Eosinophilia, fever, and nausea related to nizatidine administration have been reported.

Signs and Symptoms – There is little clinical experience with overdosage of nizatidine in humans. Test animals that received large doses of nizatidine have exhibited cholinergic-type effects, including lacrimation, salivation, emesis, miosis, and diarrhea. Single oral doses of 800 mg/kg in dogs and of 1,200 mg/kg in monkeys were not lethal. Intravenous median lethal doses in the rat and mouse were 301 mg/kg and 232 mg/kg respectively.

Treatment – To obtain up-to-date information about the treatment of overdose, a good resource is your certified Regional Poison Control Center. Telephone numbers of certified poison control centers are listed in the Physicians' Desk Reference (PDR). In managing overdosage, consider the possibility of multiple drug overdoses, interaction among drugs, and unusual drug kinetics in your patient.

Active Duodenal Ulcer – The recommended oral dosage for adults is 300 mg once daily at bedtime. An alternative dosage regimen is 150 mg twice daily.

Maintenance of Healed Duodenal Ulcer – The recommended oral dosage for adults is 150 mg once daily at bedtime.

Gastroesophageal Reflux Disease – The recommended oral dosage in adults for the treatment of erosions, ulcerations, and associated heartburn is 150 mg twice daily.

Active Benign Gastric Ulcer – The recommended oral dosage is 300 mg given either as 150 mg twice daily or 300 mg once daily at bedtime. Prior to treatment, care should be taken to exclude the possibility of malignant gastric ulceration.

Dosage Adjustment for Patients With Moderate to Severe Renal Insufficiency – The dose for patients with renal dysfunction should be reduced as follows: 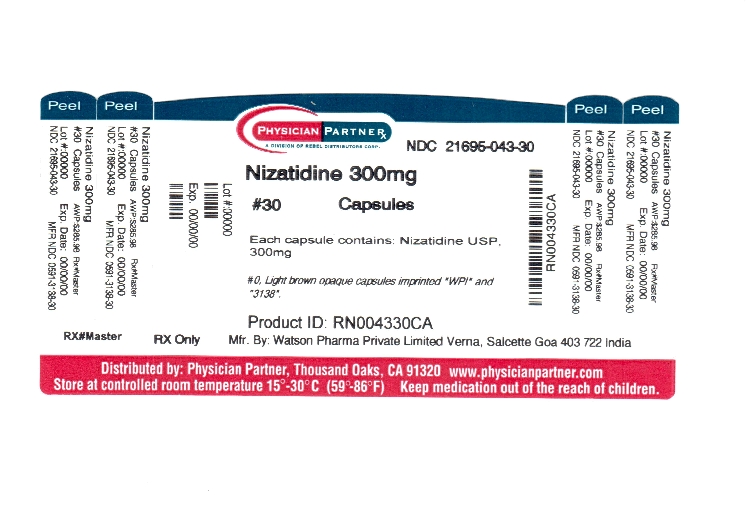