To reduce the development of drug-resistant bacteria and maintain the effectiveness of cefadroxil capsules and other antibacterial drugs, cefadroxil capsules should be used only to treat or prevent infections that are proven or strongly suspected to be caused by bacteria.

Cefadroxil monohydrate is a semisynthetic cephalosporin antibiotic intended for oral administration. It is a white to yellowish-white crystalline powder. It is soluble in water and it is acid-stable. It is chemically designated as 5-Thia-1-azabicyclo[4.2.0]oct-2-ene-2-carboxylic acid, 7-[[amino(4-hydroxyphenyl)acetyl]amino]-3-methyl-8-oxo-, monohydrate, [6R-[6α,7β(R*)]]-. It has the formula C16H17N3O5S•H2O and the molecular weight of 381.40. It has the following structural formula:

Cefadroxil monohydrate is rapidly absorbed after oral administration. Following single doses of 500 mg and 1000 mg, average peak serum concentrations were approximately 16 and 28 mcg/mL, respectively. Measurable levels were present 12 hours after administration. Over 90% of the drug is excreted unchanged in the urine within 24 hours. Peak urine concentrations are approximately 1800 mcg/mL during the period following a single 500-mg oral dose. Increases in dosage generally produce a proportionate increase in cefadroxil monohydrate urinary concentration. The urine antibiotic concentration, following a 1-g dose, was maintained well above the MIC of susceptible urinary pathogens for 20 to 22 hours.

In vitro tests demonstrate that the cephalosporins are bactericidal because of their inhibition of cell-wall synthesis. Cefadroxil has been shown to be active against the following organisms both in vitro and in clinical infections (see INDICATIONS AND USAGE):

The use of antibiotic disk susceptibility test methods which measure zone diameter give an accurate estimation of antibiotic susceptibility. One such standard procedure1 which has been recommended for use with disks to test susceptibility of organisms to cefadroxil uses the cephalosporin class (cephalothin) disk. Interpretation involves the correlation of the diameters obtained in the disk test with the minimum inhibitory concentration (MIC) for cefadroxil.

Reports from the laboratory giving results of the standard single-disk susceptibility test with a 30 mcg cephalothin disk should be interpreted according to the following criteria:

A report of "Susceptible" indicates that the pathogen is likely to be inhibited by generally achievable blood levels. A report of "Intermediate susceptible" suggests that the organism would be susceptible if high dosage is used or if the infection is confined to tissue and fluids (e.g., urine) in which high antibiotic levels are attained. A report of "Resistant’’ indicates that achievable concentrations of the antibiotic are unlikely to be inhibitory and other therapy should be selected.

Standardized procedures require the use of laboratory control organisms. The 30 mcg cephalothin disk should give the following zone diameters:

When using the NCCLS agar dilution or broth dilution (including microdilution) method² or equivalent, a bacterial isolate may be considered susceptible if the MIC (minimum inhibitory concentration) value for cephalothin is 8 mcg/mL or less. Organisms are considered resistant if the MIC is 32 mcg/mL or greater. Organisms with an MIC value of less than 32 mcg/mL but greater than 8 mcg/mL are intermediate.

Cefadroxil capsules are indicated for the treatment of patients with infection caused by susceptible strains of the designated organisms in the following diseases:

Skin and skin structure infections caused by staphylococci and/or streptococci.

Note: Only penicillin by the intramuscular route of administration has been shown to be effective in the prophylaxis of rheumatic fever. Cefadroxil monohydrate is generally effective in the eradication of streptococci from the oropharynx. However, data establishing the efficacy of cefadroxil monohydrate for the prophylaxis of subsequent rheumatic fever are not available.

Note: Culture and susceptibility tests should be initiated prior to and during therapy. Renal function studies should be performed when indicated.

To reduce the development of drug-resistant bacteria and maintain the effectiveness of cefadroxil capsules and other antibacterial drugs, cefadroxil capsules should be used only to treat or prevent infections that are proven or strongly suspected to be caused by susceptible bacteria. When culture and susceptibility information are available, they should be considered in selecting or modifying antibacterial therapy. In the absence of such data, local epidemiology and susceptibility patterns may contribute to the empiric selection of therapy.

Cefadroxil monohydrate is contraindicated in patients with known allergy to the cephalosporin group of antibiotics.

BEFORE THERAPY WITH CEFADROXIL MONOHYDRATE IS INSTITUTED, CAREFUL INQUIRY SHOULD BE MADE TO DETERMINE WHETHER THE PATIENT HAS HAD PREVIOUS HYPERSENSITIVITY REACTIONS TO CEFADROXIL, CEPHALOSPORINS, PENICILLINS, OR OTHER DRUGS. IF THIS PRODUCT IS TO BE GIVEN TO PENICILLIN-SENSITIVE PATIENTS, CAUTION SHOULD BE EXERCISED BECAUSE CROSS-SENSITIVITY AMONG BETA-LACTAM ANTIBIOTICS HAS BEEN CLEARLY DOCUMENTED AND MAY OCCUR IN UP TO 10% OF PATIENTS WITH A HISTORY OF PENICILLIN ALLERGY.

Clostridium difficile associated diarrhea (CDAD) has been reported with use of nearly all antibacterial agents, including cefadroxil monohydrate, and may range in severity from mild diarrhea to fatal colitis. Treatment with antibacterial agents alters the normal flora of the colon leading to overgrowth of C. difficile.

Cefadroxil monohydrate should be used with caution in the presence of markedly impaired renal function (creatinine clearance rate of less than 50 mL/min/1.73 M²). (See DOSAGE AND ADMINISTRATION.) In patients with known or suspected renal impairment, careful clinical observation and appropriate laboratory studies should be made prior to and during therapy.

Prescribing cefadroxil monohydrate in the absence of a proven or strongly suspected bacterial infection or a prophylactic indication is unlikely to provide benefit to the patient and increases the risk of the development of drug-resistant bacteria.

Prolonged use of cefadroxil monohydrate may result in the overgrowth of nonsusceptible organisms. Careful observation of the patient is essential. If superinfection occurs during therapy, appropriate measures should be taken.

Cefadroxil monohydrate should be prescribed with caution in individuals with history of gastrointestinal disease particularly colitis.

Patients should be counseled that antibacterial drugs including cefadroxil capsules should only be used to treat bacterial infections. They do not treat viral infections (e.g., the common cold). When cefadroxil capsules are prescribed to treat a bacterial infection, patients should be told that although it is common to feel better early in the course of therapy, the medication should be taken exactly as directed. Skipping doses or not completing the full course of therapy may (1) decrease the effectiveness of the immediate treatment and (2) increase the likelihood that bacteria will develop resistance and will not be treatable by cefadroxil capsules or other antibacterial drugs in the future.

Reproduction studies have been performed in mice and rats at doses up to 11 times the human dose and have revealed no evidence of impaired fertility or harm to the fetus due to cefadroxil monohydrate. There are, however, no adequate and well controlled studies in pregnant women. Because animal reproduction studies are not always predictive of human response, this drug should be used during pregnancy only if clearly needed.

Cefadroxil monohydrate has not been studied for use during labor and delivery. Treatment should only be given if clearly needed.

Caution should be exercised when cefadroxil monohydrate is administered to a nursing mother.

Cefadroxil is substantially excreted by the kidney, and dosage adjustment is indicated for patients with renal impairment (see DOSAGE AND ADMINISTRATION: Renal Impairment). Because elderly patients are more likely to have decreased renal function, care should be taken in dose selection, and it may be useful to monitor renal function.

Onset of pseudomembranous colitis symptoms may occur during or after antibiotic treatment (see WARNINGS).  Dyspepsia, nausea and vomiting have been reported rarely. Diarrhea has also occurred.

Allergies (in the form of rash, urticaria, angioedema, and pruritus) have been observed. These reactions usually subsided upon discontinuation of the drug. Anaphylaxis has also been reported.

Several cephalosporins have been implicated in triggering seizures, particularly in patients with renal impairment, when the dosage was not reduced (see DOSAGE AND ADMINISTRATIONand OVERDOSAGE). If seizures associated with drug therapy occur, the drug should be discontinued. Anticonvulsant therapy can be given if clinically indicated.

A study of children under six years of age suggested that ingestion of less than 250 mg/ kg of cephalosporins is not associated with significant outcomes. No action is required other than general support and observation. For amounts greater than 250 mg/kg, induce gastric emptying.

In five anuric patients, it was demonstrated that an average of 63% of a 1 g oral dose is extracted from the body during a 6–8 hour hemodialysis session.

Cefadroxil capsules are acid-stable and may be administered orally without regard to meals. Administration with food may be helpful in diminishing potential gastrointestinal complaints occasionally associated with oral cephalosporin therapy.

For all other urinary tract infections the usual dosage is 2 g per day in divided doses (b.i.d.).

Skin and Skin Structure Infections: For skin and skin structure infections the usual dosage is 1 g per day in single (q.d.) or divided doses (b.i.d.).

Pharyngitis and Tonsillitis: Treatment of group A beta-hemolytic streptococcal pharyngitis and tonsillitis— 1 g per day in single (q.d.) or divided doses (b.i.d.) for 10 days.

In patients with renal impairment, the dosage of cefadroxil monohydrate should be adjusted according to creatinine clearance rates to prevent drug accumulation. The following schedule is suggested. In adults, the initial dose is 1000 mg of cefadroxil monohydrate and the maintenance dose (based on the creatinine clearance rate [mL/min/1.73 M²]) is 500 mg at the time intervals listed below.

Patients with creatinine clearance rates over 50 mL/min may be treated as if they were patients having normal renal function. 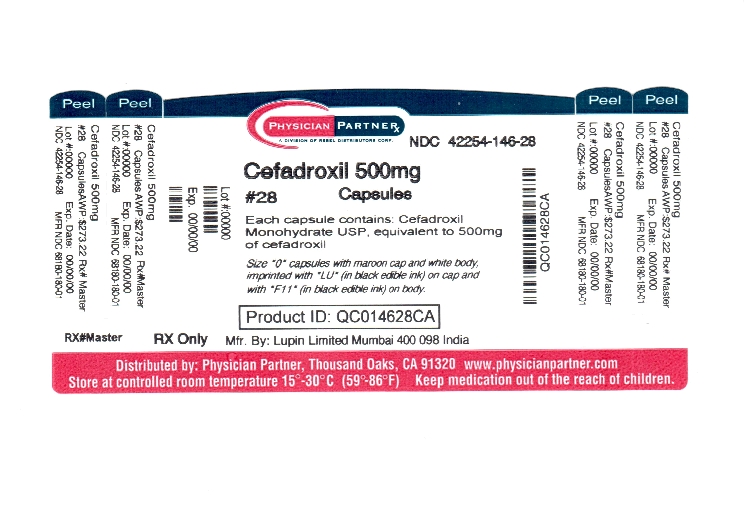