Mechanism of Actions: Cetirizine, a human metabolite of hydroxyzine, is an antihistamine; its principal effects are mediated via selective inhibition of peripheral H 1 receptors. The antihistaminic activity of cetirizine has been clearly documented in a variety of animal and human models. In vivo and ex vivo animal models have shown negligible anticholinergic and antiserotonergic activity. In clinical studies, however, dry mouth was more common with cetirizine than with placebo. In vitro receptor binding studies have shown no measurable affinity for other than H 1 receptors. Autoradiographic studies with radiolabeled cetirizine in the rat have shown negligible penetration into the brain. Ex vivo experiments in the mouse have shown that systemically administered cetirizine does not significantly occupy cerebral H 1 receptors.

Absorption: Cetirizine was rapidly absorbed with a time to maximum concentration (T max) of approximately 1 hour following oral administration of tablets or syrup in adults. Comparable bioavailability was found between the tablet and syrup dosage forms. When healthy volunteers were administered multiple doses of cetirizine (10 mg tablets once daily for 10 days), a mean peak plasma concentration (C max) of 311 ng/mL was observed. No accumulation was observed. Cetirizine pharmacokinetics were linear for oral doses ranging from 5 to 60 mg. Food had no effect on the extent of cetirizine exposure (AUC) but T max was delayed by 1.7 hours and C max was decreased by 23% in the presence of food.

Distribution: The mean plasma protein binding of cetirizine is 93%, independent of concentration in the range of 25-1000 ng/mL, which includes the therapeutic plasma levels observed.

Metabolism: A mass balance study in 6 healthy male volunteers indicated that 70% of the administered radioactivity was recovered in the urine and 10% in the feces. Approximately 50% of the radioactivity was identified in the urine as unchanged drug. Most of the rapid increase in peak plasma radioactivity was associated with parent drug, suggesting a low degree of first-pass metabolism. Cetirizine is metabolized to a limited extent by oxidative O-dealkylation to a metabolite with negligible antihistaminic activity. The enzyme or enzymes responsible for this metabolism have not been identified.

Elimination: The mean elimination half-life in 146 healthy volunteers across multiple pharmacokinetic studies was 8.3 hours and the apparent total body clearance for cetirizine was approximately 53 mL/min.

Effect of Gender: The effect of gender on cetirizine pharmacokinetics has not been adequately studied.

Effect of Race: No race-related differences in the kinetics of cetirizine have been observed.

Pharmacodynamics: Cetirizine hydrochloride at doses of 5 and 10 mg strongly inhibited the wheal and flare caused by intradermal injection of histamine in 19 pediatric volunteers (aged 5 to 12 years) and the activity persisted for at least 24 hours. In a 35-day study in children aged 5 to 12, no tolerance to the antihistaminic (suppression of wheal and flare response) effects of cetirizine hydrochloride was found. In 10 infants 7 to 25 months of age who received 4 to 9 days of cetirizine in an oral solution (0.25 mg/kg bid), there was a 90% inhibition of histamine-induced (10 mg/mL) cutaneous wheal and 87% inhibition of the flare 12 hours after administration of the last dose. The clinical relevance of this suppression of histamine-induced wheal and flare response on skin testing is unknown.

The effects of intradermal injection of various other mediators or histamine releasers were also inhibited by cetirizine, as was response to a cold challenge in patients with cold-induced urticaria. In mildly asthmatic subjects, cetirizine hydrochloride at 5 to 20 mg blocked bronchoconstriction due to nebulized histamine, with virtually total blockade after a 20-mg dose. In studies conducted for up to 12 hours following cutaneous antigen challenge, the late phase recruitment of eosinophils, neutrophils and basophils, components of the allergic inflammatory response, was inhibited by cetirizine hydrochloride at a dose of 20 mg.

In a four-week clinical trial in pediatric patients aged 6 to 11 years, results of randomly obtained ECG measurements before treatment and after 2 weeks of treatment showed that cetirizine hydrochloride 5 or 10 mg did not increase QTc versus placebo. In a one week clinical trial (N=86) of cetirizine hydrochloride oral solution (0.25 mg/kg bid) compared with placebo in pediatric patients 6 to 11 months of age, ECG measurements taken within 3 hours of the last dose did not show any ECG abnormalities or increases in QTc interval in either group compared to baseline assessments. Data from other studies where cetirizine hydrochloride was administered to patients 6-23 months of age were consistent with the findings in this study.

The effects of cetirizine hydrochloride on the QTc interval at doses higher than 10 mg have not been studied in children less than 12 years of age.

Perennial Allergic Rhinitis: Cetirizine hydrochloride oral solution is indicated for the relief of symptoms associated with perennial allergic rhinitis due to allergens such as dust mites, animal dander and molds in children 6 to 23 months of age. Symptoms treated effectively include sneezing, rhinorrhea, postnasal discharge, nasal pruritus, ocular pruritus, and tearing.

Chronic Urticaria: Cetirizine hydrochloride oral solution is indicated for the treatment of the uncomplicated skin manifestations of chronic idiopathic urticaria in children 6 months to 5 years of age. It significantly reduces the occurrence, severity, and duration of hives and significantly reduces pruritus.

Cetirizine hydrochloride is contraindicated in those patients with a known hypersensitivity to it or any of its ingredients or hydroxyzine.

Activities Requiring Mental Alertness: In clinical trials, the occurrence of somnolence has been reported in some patients taking cetirizine hydrochloride; due caution should therefore be exercised when driving a car or operating potentially dangerous machinery. Concurrent use of cetirizine hydrochloride with alcohol or other CNS depressants should be avoided because additional reductions in alertness and additional impairment of CNS performance may occur.

Drug-Drug Interactions: No clinically significant drug interactions have been found with theophylline at a low dose, azithromycin, pseudoephedrine, ketoconazole, or erythromycin. There was a small decrease in the clearance of cetirizine caused by a 400-mg dose of theophylline; it is possible that larger theophylline doses could have a greater effect.

Cetirizine was not mutagenic in the Ames test, and not clastogenic in the human lymphocyte assay, the mouse lymphoma assay, and in vivo micronucleus test in rats.

In a fertility and general reproductive performance study in mice, cetirizine did not impair fertility at an oral dose of 64 mg/kg (approximately 25 times the maximum recommended daily oral dose in adults on a mg/m 2 basis).

The safety of cetirizine in 399 patients aged 12 to 24 months has been demonstrated in a placebo-controlled 18-month trial, in which the average dose was 0.25 mg/kg bid, corresponding to a range of 4 to 11 mg/day. The safety of cetirizine hydrochloride oral solution has been demonstrated in 42 patients aged 6 to 11 months in a placebo-controlled 7-day trial. The prescribed dose was 0.25 mg/kg bid, which corresponded to a mean of 4.5 mg/day, with a range of 3.4 to 6.2 mg/day.

The safety and effectiveness of cetirizine in pediatric patients under the age of 6 months have not been established.

Table 1 lists adverse experiences which were reported for cetirizine hydrochloride 5 and 10 mg in pediatric patients aged 6 to 11 years in placebo-controlled clinical trials in the United States and were more common with cetirizine hydrochloride than placebo. Of these, abdominal pain was considered treatment-related and somnolence appeared to be dose-related, 1.3% in placebo, 1.9% at 5 mg and 4.2% at 10 mg. The adverse experiences reported in pediatric patients aged 2 to 5 years in placebo-controlled trials were qualitatively similar in nature and generally similar in frequency to those reported in trials with children aged 6 to 11 years.

The following events were observed infrequently (less than 2%), in either 3982 adults and children 12 years and older or in 659 pediatric patients aged 6 to 11 years who received cetirizine hydrochloride in U.S. trials, including an open adult study of six months duration. A causal relationship of these infrequent events with cetirizine hydrochloride administration has not been established.

There is no information to indicate that abuse or dependency occurs with cetirizine hydrochloride.

Cetirizine hydrochloride oral solution can be taken without regard to food consumption.

Children 2 to 5 Years for Chronic Urticaria: The recommended initial dose of cetirizine hydrochloride oral solution in children aged 2 to 5 years is 2.5 mg (½ teaspoon) syrup once daily. The dosage in this age group can be increased to a maximum dose of 5 mg per day given as 1 teaspoonful syrup once a day, or ½ teaspoonful syrup given every 12 hours.

Children 6 months to <2 years for Perennial Allergic Rhinitis and Chronic Urticaria: The recommended dose of cetirizine hydrochloride oral solution in children 6 months to 23 months of age is 2.5 mg (½ teaspoonful) once daily. The dose in children 12 to 23 months of age can be increased to a maximum dose of 5 mg per day, given as ½ teaspoonful (2.5 mg) every 12 hours. 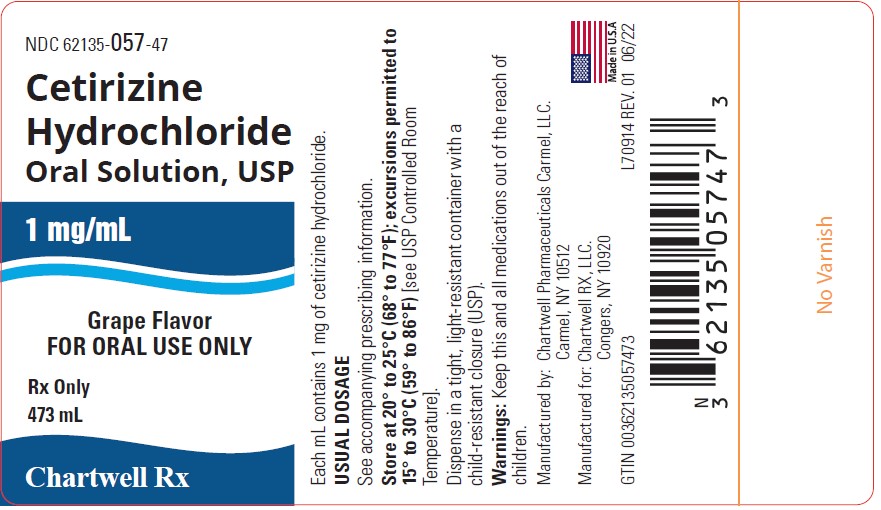