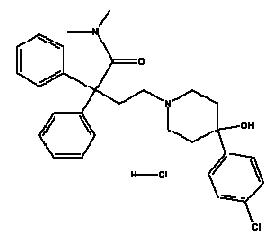 Tiredness, dizziness, or drowsiness may occur in the setting of diarrheal syndromes treated with loperamide hydrochloride. Therefore, it is advisable to use caution when driving a car or operating machinery. (See ADVERSE REACTIONS.)

The adverse events with an incidence of 1.0% or greater, which were more frequently reported in patients on placebo than on loperamide hydrochloride were: dry mouth, flatulence, abdominal cramp and colic.

A number of the adverse events reported during the clinical investigations and postmarketing experience with loperamide are frequent symptoms of the underlying diarrheal syndrome (abdominal pain/discomfort, nausea, vomiting, dry mouth, tiredness, drowsiness, dizziness, constipation, and flatulence). These symptoms are often difficult to distinguish from undesirable drug effects.

Studies in morphine-dependent monkeys demonstrated that loperamide hydrochloride at doses above those recommended for humans prevented signs of morphine withdrawal. However, in humans, the naloxone challenge pupil test, which when positive indicates opiate-like effects, performed after a single high dose, or after more than two years of therapeutic use of loperamide hydrochloride, was negative. Orally administered loperamide hydrochloride capsules (loperamide formulated with magnesium stearate) are both highly insoluble and penetrate the CNS poorly.

No formal pharmacokinetic studies were conducted in elderly subjects. However, there were no major differences reported in the drug disposition in elderly patients with diarrhea relative to young patients. No dosage adjustment is required for the elderly.

Although no pharmacokinetic data are available in patients with hepatic impairment, loperamide hydrochloride should be used with caution in such patients because of reduced first pass metabolism (see PRECAUTIONS).

Manufactured In Czech Republic By: