HEMABATE Sterile Solution, an oxytocic, contains the tromethamine salt of the (15S)-15 methyl analogue of naturally occurring prostaglandin F2α in a solution suitable for intramuscular injection.

Carboprost tromethamine is the established name for the active ingredient in HEMABATE. Four other chemical names are:

The structural formula is represented below: 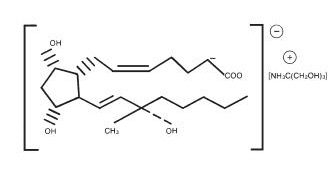 The molecular formula is C25H47O8N. The molecular weight of carboprost tromethamine is 489.64. It is a white to slightly off-white crystalline powder. It generally melts between 95° and 105° C, depending on the rate of heating.

Carboprost tromethamine dissolves readily in water at room temperature at a concentration greater than 75 mg/mL.

Carboprost tromethamine administered intramuscularly stimulates in the gravid uterus myometrial contractions similar to labor contractions at the end of a full term pregnancy. Whether or not these contractions result from a direct effect of carboprost on the myometrium has not been determined. Nonetheless, they evacuate the products of conception from the uterus in most cases.

Postpartum, the resultant myometrial contractions provide hemostasis at the site of placentation.

HEMABATE Sterile Solution is indicated for aborting pregnancy between the 13th and 20th weeks of gestation as calculated from the first day of the last normal menstrual period and in the following conditions related to second trimester abortion:

HEMABATE is indicated for the treatment of postpartum hemorrhage due to uterine atony which has not responded to conventional methods of management. Prior treatment should include the use of intravenously administered oxytocin, manipulative techniques such as uterine massage and, unless contraindicated, intramuscular ergot preparations. Studies have shown that in such cases, the use of HEMABATE has resulted in satisfactory control of hemorrhage, although it is unclear whether or not ongoing or delayed effects of previously administered ecbolic agents have contributed to the outcome. In a high proportion of cases, HEMABATE used in this manner has resulted in the cessation of life threatening bleeding and the avoidance of emergency surgical intervention.

HEMABATE Sterile Solution (carboprost tromethamine), like other potent oxytocic agents, should be used only with strict adherence to recommended dosages.

HEMABATE should be used by medically trained personnel in a hospital which can provide immediate intensive care and acute surgical facilities.

HEMABATE does not appear to directly affect the fetoplacental unit. Therefore, the possibility does exist that the previable fetus aborted by HEMABATE could exhibit transient life signs. HEMABATE is not indicated if the fetus in utero has reached the stage of viability. HEMABATE should not be considered a feticidal agent.

Evidence from animal studies has suggested that certain other prostaglandins have some teratogenic potential. Although these studies do not indicate that HEMABATE is teratogenic, any pregnancy termination with HEMABATE that fails should be completed by some other means.

This product contains benzyl alcohol. Benzyl alcohol has been reported to be associated with a fatal "Gasping Syndrome" in premature infants.

Animal studies lasting several weeks at high doses have shown that prostaglandins of the E and F series can induce proliferation of bone. Such effects have also been noted in newborn infants who have received prostaglandin E1 during prolonged treatment. There is no evidence that short term administration of HEMABATE Sterile Solution can cause similar bone effects.

In patients with a history of asthma, hypo- or hypertension, cardiovascular, renal, or hepatic disease, anemia, jaundice, diabetes, or epilepsy, HEMABATE should be used cautiously.

As with any oxytocic agent, HEMABATE should be used with caution in patients with compromised (scarred) uteri.

As with spontaneous abortion, a process which is sometimes incomplete, abortion induced by HEMABATE may be expected to be incomplete in about 20% of cases.

Although the incidence of cervical trauma is extremely small, the cervix should always be carefully examined immediately post-abortion.

Use of HEMABATE is associated with transient pyrexia that may be due to its effect on hypothalamic thermoregulation. Temperature elevations exceeding 2° F (1.1° C) were observed in approximately one-eighth of the patients who received the recommended dosage regimen. In all cases, temperature returned to normal when therapy ended. Differentiation of post-abortion endometritis from drug-induced temperature elevations is difficult, but with increasing clinical experience, the distinctions become more obvious and are summarized below:

Increased blood pressure. In the postpartum hemorrhage series, 5/115 (4%) of patients had an increase of blood pressure reported as a side effect. The degree of hypertension was moderate and it is not certain as to whether this was in fact due to a direct effect of HEMABATE or a return to a status of pregnancy associated hypertension manifest by the correction of hypovolemic shock. In any event the cases reported did not require specific therapy for the elevated blood pressure.

Use in patients with chorioamnionitis. During the clinical trials with HEMABATE, chorioamnionitis was identified as a complication contributing to postpartum uterine atony and hemorrhage in 8/115 (7%) of cases, 3 of which failed to respond to HEMABATE. This complication during labor may have an inhibitory effect on the uterine response to HEMABATE similar to what has been reported for other oxytocic agents.1

Carcinogenic bioassay studies have not been conducted in animals with HEMABATE due to the limited indications for use and short duration of administration. No evidence of mutagenicity was observed in the Micronucleus Test or Ames Assay.

Animal studies do not indicate that HEMABATE is teratogenic, however, it has been shown to be embryotoxic in rats and rabbits and any dose which produces increased uterine tone could put the embryo or fetus at risk.

The adverse effects of HEMABATE Sterile Solution are generally transient and reversible when therapy ends. The most frequent adverse reactions observed are related to its contractile effect on smooth muscle.

The pretreatment or concurrent administration of antiemetic and antidiarrheal drugs decreases considerably the very high incidence of gastrointestinal effects common with all prostaglandins used for abortion. Their use should be considered an integral part of the management of patients undergoing abortion with HEMABATE.

Adverse effects observed during the use of HEMABATE for abortion and for hemorrhage, not all of which are clearly drug related, in decreasing order of frequency include:

The most common complications when HEMABATE was utilized for abortion requiring additional treatment after discharge from the hospital were endometritis, retained placental fragments, and excessive uterine bleeding, occurring in about one in every 50 patients.

An optional test dose of 100 micrograms (0.4 mL) may be administered initially. The dose may be increased to 500 micrograms (2 mL) if uterine contractility is judged to be inadequate after several doses of 250 micrograms (1 mL).

The total dose administered of carboprost tromethamine should not exceed 12 milligrams and continuous administration of the drug for more than two days is not recommended.

An initial dose of 250 micrograms of HEMABATE Sterile Solution (1 mL of HEMABATE) is to be given deep, intramuscularly. In clinical trials it was found that the majority of successful cases (73%) responded to single injections. In some selected cases, however, multiple dosing at intervals of 15 to 90 minutes was carried out with successful outcome. The need for additional injections and the interval at which these should be given can be determined only by the attending physicians as dictated by the course of clinical events. The total dose of HEMABATE should not exceed 2 milligrams (8 doses).

HEMABATE Sterile Solution is available in the following packages:

This product's label may have been updated. For current full prescribing information, please visit www.pfizer.com

FOR INTRAMUSCULAR USE ONLY
Refrigerate at 2° to 8°C (36° to 46°F).
DOSAGE AND USE: See accompanying
prescribing information.
* Equivalent to 250 mcg carboprost.
Distributed by Pharmacia & Upjohn Co
Division of Pfizer Inc, NY, NY 10017 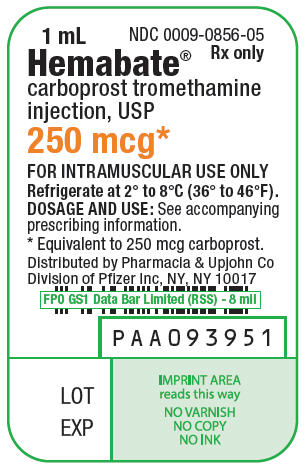 FOR INTRAMUSCULAR USE ONLY