It is a crystalline white powder, very soluble in water, designated as 3α-(Diphenylmethoxy)-1αH, 5αH-tropane methanesulfonate, with the following structural formula: 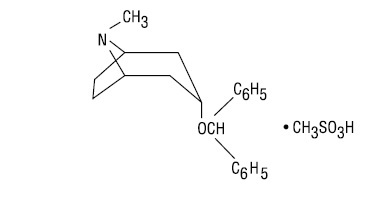 For use as an adjunct in the therapy of all forms of parkinsonism.

The physician should be aware of the possible occurrence of glaucoma. Although the drug does not appear to have any adverse effect on simple glaucoma, it probably should not be used in

The adverse reactions below, most of which are antichlolinergic in nature, have been reported and within each category are listed in order of decreasing severity.

Occasionally, an allergic reaction, e.g., skin rash, develops. If this can not be controlled by dosage reduction, the medication should be discontinued.

Treatment – Physostigmine salicylate, 1 to 2 mg, SC or IV, reportedly will reverse symptoms of anticholinergic intoxication. * A second injection may be given after 2 hours if required. Otherwise treatment is symptomatic and supportive. Induce emesis or perform gastric lavage (contraindicated in precomatose convulsive, or psychotic states). Maintain respiration. A short-acting barbiturate may be used for CNS excitement, but with caution to avoid subsequent depression; supportive care for depression (avoid convulsant stimulants such as picrotoxin, pentylenetetrazol, or bemegride); artificial respiration for severe respiratory depression; a local miotic for mydriasis and cycloplegia; ice bags or other cold applications and alcohol sponges for hyperpyrexia, a vasopressor and fluids for circulatory collapse. Darken room for photophobia.

Postencephalitic and Idiopathic Parkinsonism – The usual daily dose is 1 to 2 mg, with a range of 0.5 to 6 mg orally.

Benztropine mesylate may be used concomitantly with Carbidopa- Levodopa, or with levodopa, in which case periodic dosage adjustment may be required in order to maintain optimum response.

Drug-Induced Extrapyramidal Disorders – In treating extrapyramidal disorders due to neuroleptic drugs (e.g., phenothiazines), the recommended dosage is 1 to 4 mg once or twice a day orally. Dosage must be individualized according to the need of the patient. Some patients require more than recommended; others do not need as much.

When extrapyramidal disorders develop soon after initiation of treatment with neuroleptic drugs (e.g., phenothiazines), they are likely to be transient. One to 2 mg of benztropine mesylate tablets two or three times a day usually provides relief within one or two days. After one or two weeks the drug should be withdrawn to determine the continued need for it. If such disorders recur, benztropine mesylate can be reinstituted.

Dispense in a well-closed container as defined in the USP. 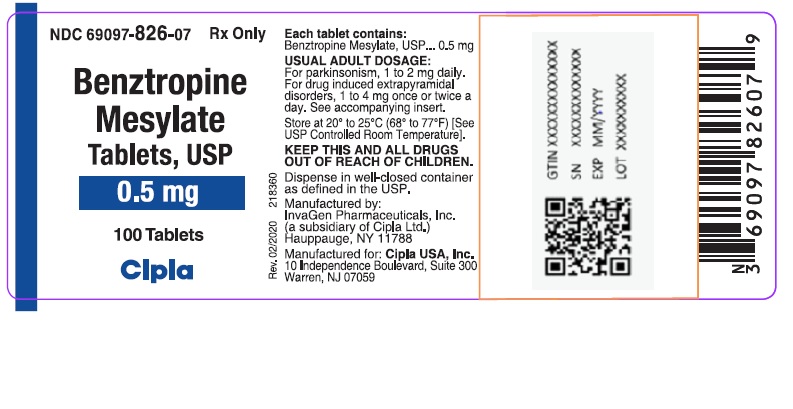