Famotidine tablets are indicated in adult and pediatric patients 40 kg and greater for the treatment of:

Famotidine tablets are indicated in adults for the: 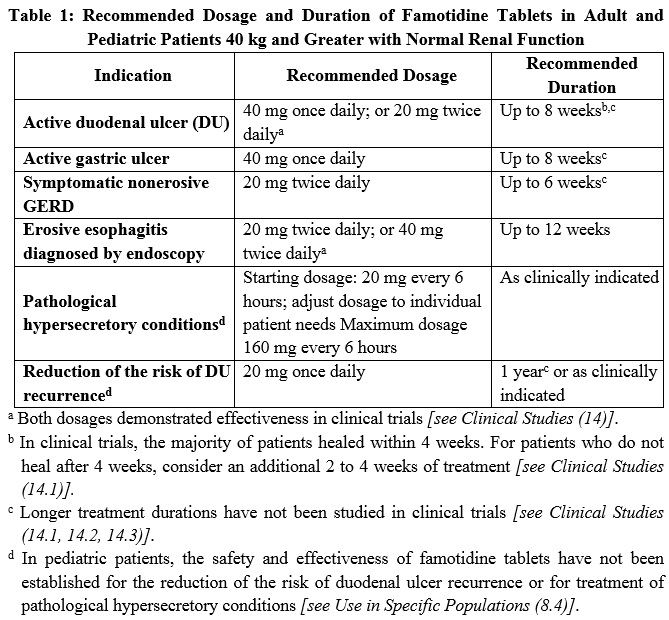 Dosage adjustments of famotidine tablets are recommended for patients with moderate to severe renal impairment (creatinine clearance less than 60 mL/min) [see Use in Specific Populations (8.6)]. Table 2 shows the recommended maximum dosage of famotidine 20 mg or 40 mg tablets for patients with renal impairment, by indication. Use the lowest effective dose. Some dosage adjustments may require switching to other formulations of famotidine (e.g., oral suspension, lower dose tablet). 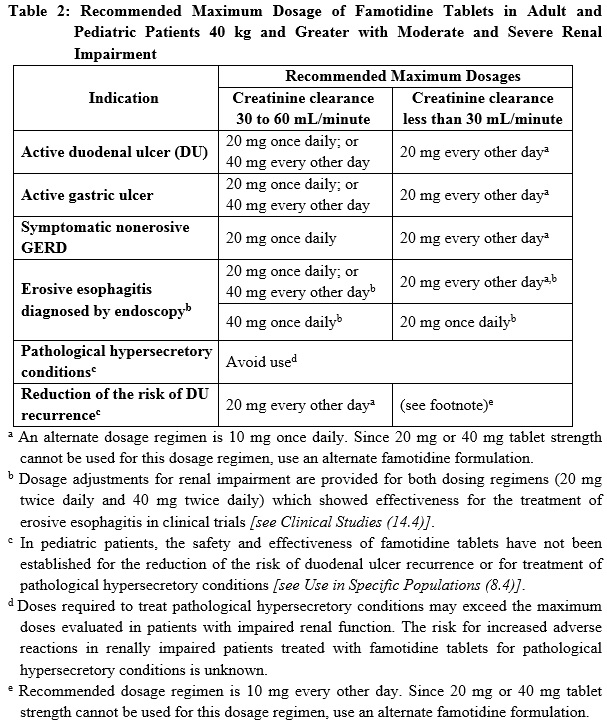 Famotidine tablets are contraindicated in patients with a history of serious hypersensitivity reactions (e.g., anaphylaxis) to famotidine or other histamine-2 (H2) receptor antagonists.

The following adverse reactions occurred in greater than or equal to 1% of famotidine-treated patients: headache, dizziness and constipation.

The following other adverse reactions were reported in less than 1% of patients in clinical trials:

The following adverse reactions have been identified during post-approval use of famotidine. Because these reactions are reported voluntarily from a population of uncertain size, it is not always possible to reliably estimate their frequency or establish a causal relationship to drug exposure.

Famotidine can reduce the absorption of other drugs, due to its effect on reducing intragastric acidity, leading to loss of efficacy of the concomitant drug.

Concomitant administration of famotidine with dasatinib, delavirdine mesylate, cefditoren, and fosamprenavir is not recommended.

See the prescribing information for other drugs dependent on gastric pH for absorption for administration instructions, including atazanavir, erlotinib, ketoconazole, itraconazole, ledipasvir/sofosbuvir, nilotinib, and rilpivirine.

Although not studied clinically, famotidine is considered a weak CYP1A2 inhibitor and may lead to substantial increases in blood concentrations of tizanidine, a CYP1A2 substrate. Avoid concomitant use with famotidine. If concomitant use is necessary, monitor for hypotension, bradycardia or excessive drowsiness. Refer to the full prescribing information for tizanidine.

Available data with H2-receptor antagonists, including famotidine, in pregnant women are insufficient to establish a drug-associated risk of major birth defects, miscarriage or adverse maternal or fetal outcomes. In animal reproduction studies, no adverse development effects were observed with oral administration of famotidine at doses up to approximately 243 and 122 times, respectively, the recommended human dose of 80 mg per day for the treatment of erosive esophagitis (see Data).

Reproductive studies have been performed in rats and rabbits at oral doses of up to 2000 and 500 mg/kg/day, respectively, and in both species at intravenous doses of up to 200 mg/kg/day, and have revealed no significant evidence of impaired fertility or harm to the fetus due to famotidine. While no direct fetotoxic effects have been observed, sporadic abortions occurring only in mothers displaying marked decreased food intake were seen in some rabbits at oral doses of 200 mg/kg/day (about 49 times the recommended human dose of 80 mg per day, based on body surface area) or higher. There are, however, no adequate or well-controlled studies in pregnant women. Because animal reproductive studies are not always predictive of human response, this drug should be used during pregnancy only if clearly needed.

There are limited data available on the presence of famotidine in human breast milk. There were no effects on the breastfed infant. There are no data on famotidine effects on milk production. Famotidine is present in the milk of lactating rats (see Data).

The developmental and health benefits of breastfeeding should be considered along with the mother’s clinical need for famotidine and any potential adverse effects on the breastfed child from famotidine or from the underlying maternal condition.

Of the 1442 famotidine-treated patients in clinical studies, approximately 10% were 65 and older. In these studies, no overall differences in safety or effectiveness were observed between elderly and younger patients. In postmarketing experience, CNS adverse reactions have been reported in elderly patients with and without renal impairment receiving famotidine [see Warnings and Precautions (5.1)].

Famotidine is known to be substantially excreted by the kidney, and the risk of adverse reactions to famotidine may be greater in elderly patients, particularly those with impaired renal function [see Use in Specific Populations (8.6)].

In general, use the lowest effective dose of famotidine for an elderly patient and monitor renal function [see Dosage and Administration (2.2)].

Due to low binding to plasma proteins, famotidine is eliminated by hemodialysis. There is limited experience on the usefulness of hemodialysis as a treatment for famotidine overdosage.

The active ingredient in famotidine tablets USP is a histamine-2 (H2) receptor antagonist. Famotidine is N'-(aminosulfonyl)-3-[[[2-[(diaminomethylene)amino]-4-thiazolyl]methyl]thio]propanimidamide. The empirical formula of famotidine is C8H15N7O2S3 and its molecular weight is 337.43. Its structural formula is:

Famotidine inhibited both basal and nocturnal gastric secretion, as well as secretion stimulated by food and pentagastrin. After oral administration of famotidine, the onset of the antisecretory effect occurred within one hour; the maximum effect was dose-dependent, occurring within one to three hours. Duration of inhibition of secretion by doses of 20 mg and 40 mg was 10 to 12 hours.

Single evening oral doses of 20 mg and 40 mg inhibited basal and nocturnal acid secretion in all subjects; mean nocturnal gastric acid secretion was inhibited by 86% and 94%, respectively, for a period of at least 10 hours. The same doses given in the morning suppressed food-stimulated acid secretion in all subjects. The mean suppression was 76% and 84%, respectively, 3 to 5 hours after administration, and 25% and 30%, respectively, 8 to 10 hours after administration. In some subjects who received the 20 mg dose, however, the antisecretory effect was dissipated within 6 to 8 hours. There was no cumulative effect with repeated doses. The nocturnal intragastric pH was raised by evening doses of 20 mg and 40 mg of famotidine to mean values of 5.0 and 6.4, respectively. When famotidine was given after breakfast, the basal daytime interdigestive pH at 3 and 8 hours after 20 mg or 40 mg of famotidine was raised to about 5.

Famotidine had little or no effect on fasting or postprandial serum gastrin levels. Gastric emptying and exocrine pancreatic function were not affected by famotidine.

In clinical pharmacology studies, systemic effects of famotidine in the CNS, cardiovascular, respiratory or endocrine systems were not noted. Also, no anti-androgenic effects were noted. Serum hormone levels, including prolactin, cortisol, thyroxine (T4), and testosterone, were not altered after treatment with famotidine.

Pharmacodynamics of famotidine, assessed by gastric pH, were evaluated in 5 pediatric patients 2 to 13 years of age using the sigmoid Emax model. These data suggest that the relationship between serum concentration of famotidine and gastric acid suppression is similar to that observed in adults (see Table 3).

Famotidine is incompletely absorbed. The bioavailability of oral doses is 40 to 45%. Bioavailability may be slightly increased by food, or slightly decreased by antacids; however, these effects are of no clinical consequence.

Peak famotidine plasma levels occur in 1 to 3 hours. Plasma levels after multiple dosages are similar to those after single doses.

Fifteen to 20% of famotidine in plasma is protein bound.

Famotidine undergoes minimal first-pass metabolism. Twenty-five to 30% of an oral dose was recovered in the urine as unchanged compound. The only metabolite identified in humans is the S-oxide.

Human Organic Anion Transporter (OAT) 1 and 3: In vitro studies indicate that famotidine is a substrate for OAT1 and OAT3. Following coadministration of probenecid (1500 mg), an inhibitor of OAT1 and OAT3, with a single oral 20 mg dose of famotidine in 8 healthy subjects, the serum AUC0-10h of famotidine increased from 424 to 768 ng•hr/mL and the maximum serum concentration (Cmax) increased from 73 to 113 ng/mL. Renal clearance, urinary excretion rate and amount of famotidine excreted unchanged in urine were decreased. The clinical relevance of this interaction is unknown.

Multidrug and Toxin Extrusion Protein 1 (MATE-1): An in vitro study showed that famotidine is an inhibitor of MATE-1. However, no clinically significant interaction with metformin, a substrate for MATE-1, was observed.

Carcinogenic potential of famotidine was assessed in a 106-week oral carcinogenicity study in rats and a 92-week oral carcinogenicity study in mice. In the 106-week study in rats and the 92-week study in mice at oral doses of up to 2000 mg/kg/day (approximately 243 and 122 times, respectively, based on body surface area, the recommended human dose of 80 mg per day for the treatment of erosive esophagitis), there was no evidence of carcinogenic potential for famotidine.

Famotidine was negative in the microbial mutagen test (Ames test) using Salmonella typhimurium and Escherichia coli with or without rat liver enzyme activation at concentrations up to 10,000 mcg/plate. In in vivo studies in mice, with a micronucleus test and a chromosomal aberration test, no evidence of a mutagenic effect was observed.

In studies with rats given oral doses of up to 2000 mg/kg/day (approximately 243 times, based on body surface area, the recommended human dose of 80 mg per day) fertility and reproductive performance were not affected.

In a U.S. multicenter, double-blind trial in adult outpatients with endoscopically confirmed duodenal ulcer (DU), orally administered famotidine was compared to placebo. As shown in Table 4, 70% of patients treated with famotidine 40 mg at bedtime were healed by Week 4. Most patients’ DU healed within 4 weeks.

Patients not healed by Week 4 were continued in the trial. By Week 8, 83% of patients treated with famotidine had healed DU, compared to 45% of patients treated with placebo. The incidence of DU healing with famotidine was greater than with placebo at each time point based on proportion of endoscopically confirmed healed DUs. Trials have not assessed the safety of famotidine in uncomplicated active DU for periods of more than 8 weeks.

In both a U.S. and an international multicenter, double-blind trials in patients with endoscopically confirmed active gastric ulcer (GU), orally administered famotidine 40 mg at bedtime was compared to placebo. Antacids were permitted during the trials, but consumption was not significantly different between the famotidine and placebo groups.

As shown in Table 5, the incidence of GU healing confirmed by endoscopy (dropouts counted as unhealed) with famotidine was greater than placebo at Weeks 6 and 8 in the U.S. trial, and at Weeks 4, 6 and 8 in the international trial. In these trials, most famotidine-treated patients healed within 6 weeks. Trials have not assessed the safety of famotidine in uncomplicated active GU for periods of more than 8 weeks.

14.4 Erosive Esophagitis due to GERD

In trials of patients with pathological hypersecretory conditions such as Zollinger-Ellison syndrome with or without multiple endocrine neoplasias, famotidine significantly inhibited gastric acid secretion and controlled associated symptoms. Orally administered famotidine dosages from 20 mg to 160 mg every 6 hours maintained basal acid secretion below 10 mEq/hour; initial dosages were titrated to the individual patient need and subsequent adjustments were necessary with time in some patients.

Controlled trials have not extended beyond one year.

Famotidine tablets USP, 20 mg are white color round shaped film coated tablet, debossed with “T” on one side and “501” on the other side.

Famotidine tablets USP, 40 mg are white color round shaped film coated tablet, debossed with “T” on one side and “502” on the other side.

Advise elderly patients and those with moderate and severe renal impairment of the risk of CNS adverse reactions, including confusion, delirium, hallucinations, disorientation, agitation, seizures, and lethargy [see Warnings and Precautions (5.1)]. Report symptoms immediately to a healthcare provider.

Advise patients with moderate and severe renal impairment of the risk of QT interval prolongation [see Use in Specific Populations (8.6)]. Report new cardiac symptoms, such as palpitations, fainting and dizziness or lightheadedness immediately to a healthcare provider.