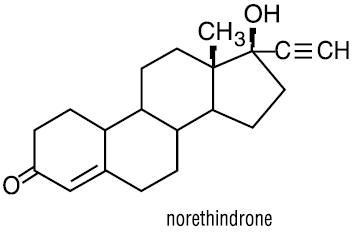 Jencycla progestin-only oral contraceptives prevent conception by suppressing ovulation in approximately half of users, thickening the cervical mucus to inhibit sperm penetration, lowering the midcycle LH and FSH peaks, slowing the movement of the ovum through the fallopian tubes, and altering the endometrium.

If used perfectly, the first-year failure rate for progestin-only oral contraceptives is 0.5%. However, the typical failure rate is estimated to be closer to 5%, due to late or omitted pills. Table 1 lists the pregnancy rates for users of all major methods of contraception.

Jencycla Tablets have not been studied for and are not indicated for use in emergency contraception.

Cigarette smoking increases the risk of serious cardiovascular disease. Women who use oral contraceptives should be strongly advised not to smoke.

If follicular development occurs, atresia of the follicle is sometimes delayed and the follicle may continue to grow beyond the size it would attain in a normal cycle. Generally these enlarged follicles disappear spontaneously. Often they are asymptomatic; in some cases they are associated with mild abdominal pain. Rarely they may twist or rupture, requiring surgical intervention.

Some epidemiological studies of oral contraceptive users have reported an increased relative risk of developing breast cancer, particularly at a younger age and apparently related to duration of use. These studies have predominantly involved combined oral contraceptives and there is insufficient data to determine whether the use of POPs similarly increases the risk.

A meta-analysis of 54 studies found a small increase in the frequency of having breast cancer diagnosed for women who were currently using combined oral contraceptives or had used them within the past ten years.

Women with breast cancer should not use oral contraceptives because the role of female hormones in breast cancer has not been fully determined.

Lipid metabolism is occasionally affected in that HDL, HDL2, and apolipoprotein A-I and A-II may be decreased; hepatic lipase may be increased. There is usually no effect on total cholesterol, HDL3 , LDL, or VLDL.

The effectiveness of progestin-only pills is reduced by hepatic enzyme-inducing drugs such as the anticonvulsants phenytoin, carbamazepine, and barbiturates, and the antituberculosis drug rifampin. No significant interaction has been found with broad-spectrum antibiotics.

Concurrent use of bosentan and norethindrone containing products may result in decreased concentrations of these contraceptive hormones thereby increasing the risk of unintended pregnancy and unscheduled bleeding.

In general, no adverse effects have been found on breastfeeding performance or on the health, growth, or development of the infant. However, isolated post-marketing cases of decreased milk production have been reported. Small amounts of progestins pass into the breast milk of nursing mothers, resulting in detectable steroid levels in infant plasma.

Safety and efficacy of Jencycla tablets have been established in women of reproductive age. Safety and efficacy are expected to be the same for postpubertal adolescents under the age of 16 and for users 16 years and older. Use of this product before menarche is not indicated.

The onset or exacerbation of migraine or development of severe headache with focal neurological symptoms which is recurrent or persistent requires discontinuation of progestin-only contraceptives and evaluation of the cause.

Adverse reactions reported with the use of POPs include:

The following adverse reactions were also reported in clinical trials or during post-marketing experience:

To achieve maximum contraceptive effectiveness, Jencycla must be taken exactly as directed. One tablet is taken every day, at the same time. Administration is continuous, with no interruption between pill packs. See DETAILED PATIENT LABELING for detailed instruction.

Jencycla Tablets containing 0.35 mg of norethindrone, green colored, round, flat face, beveled edge tablets, debossed with "O23" on one side and "LU" on the other side.

Jencycla™ is a trademark of Lupin Pharmaceuticals, Inc.

This product (like all oral contraceptives) is used to prevent pregnancy. It does not protect against HIV infection (AIDS) or other sexually transmitted diseases. 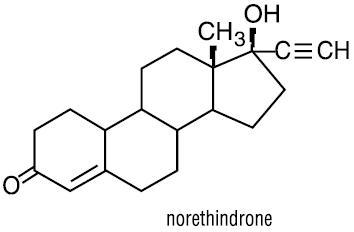 This leaflet is about birth control pills that contain one hormone, a progestin. Please read this leaflet before you begin to take your pills. It is meant to be used along with talking with your healthcare professional.

HOW EFFECTIVE ARE POPs?

Jencycla Tablets have not been studied for and are not indicated for use in emergency contraception.

HOW DO POPs WORK?

POPs can prevent pregnancy in different ways including:

YOU SHOULD NOT TAKE POPs

If you have sudden or severe pain in your lower abdomen or stomach area, you may have an ectopic pregnancy or an ovarian cyst. If this happens, you should contact your healthcare professional immediately.

Cancer Of The Reproductive Organs And Breasts

Diabetic women taking POPs do not generally require changes in the amount of insulin they are taking. However, your healthcare professional may monitor you more closely under these conditions.

The most common side effect of POPs is a change in menstrual bleeding. Your periods may be either early or late, and you may have some spotting between periods. Taking pills late or missing pills can result in some spotting or bleeding.

Less common side effects include headaches, tender breasts, nausea, vomiting, dizziness, and fatigue. Depression, nervousness, leg pain, vaginal discharge, fluid retention, allergic reactions, jaundice or a yellowing of the skin or eyeballs, loss of scalp hair, rash/itchy rash, weight gain, acne and extra hair on your face and body have been reported, but are rare.

If you are concerned about any of these side effects, check with your healthcare professional.

USING POPs WITH OTHER MEDICINES

Before taking a POP, inform your healthcare professional of any other medication, including over-the-counter medicine, that you may be taking.

Medicines for seizures such as:

Medicine for pulmonary hypertension such as:

Herbal products such as:

Before you begin taking any new medicines be sure your healthcare professional knows you are taking a progestin-only birth control pill.

HOW TO TAKE POPs

•     The week numbers as shown in the picture below: 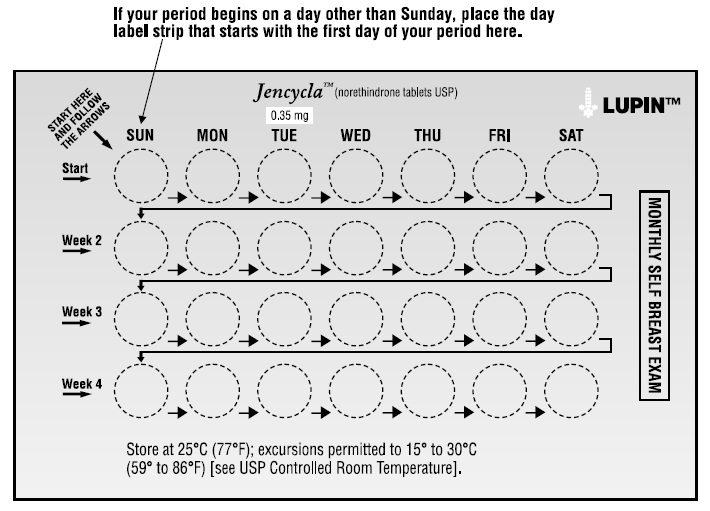 IF YOU ARE LATE OR MISS TAKING YOUR POPs

1) TAKE a missed pill as soon as you remember that you missed it,

2) THEN go back to taking POPs at your regular time,

3) BUT be sure to use a backup method (such as a condom and/or a spermicide) every time you have sex for the next 48 hours.

If you think you are pregnant, contact your healthcare professional. Even though research has shown that POPs do not cause harm to the unborn baby, it is always best not to take any drugs or medicines that you don’t need when you are pregnant.

WILL POPs AFFECT YOUR ABILITY TO GET PREGNANT LATER?

If you are breastfeeding, POPs will not affect the quality or amount of your breast milk or the health of your nursing baby. However, isolated cases of decreased milk production have been reported.

Jencycla™ is a trademark of Lupin Pharmaceuticals, Inc.

3 Wallets of 28 Tablets Each 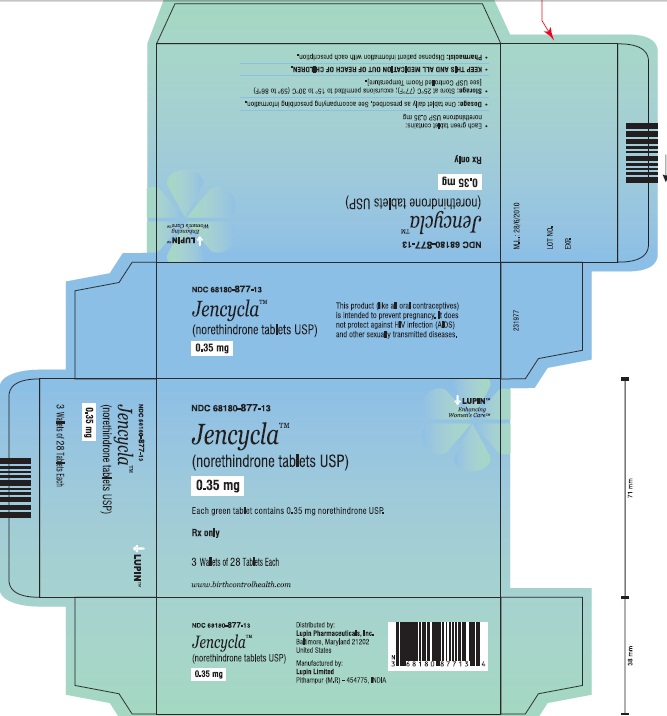 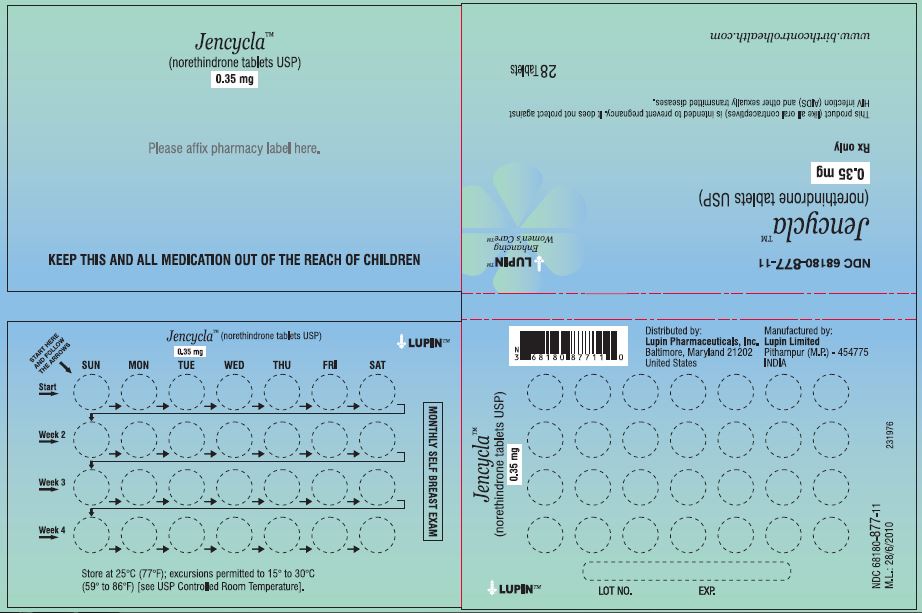