PENTASA (mesalamine) for oral administration is a controlled-release formulation of mesalamine, an aminosalicylate anti-inflammatory agent for gastrointestinal use.

Chemically, mesalamine is 5-amino-2-hydroxybenzoic acid. It has a molecular weight of 153.14. 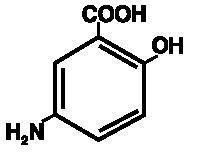 The mechanism of action of mesalamine (and sulfasalazine) is unknown, but appears to be topical rather than systemic. Mucosal production of arachidonic acid (AA) metabolites, both through the cyclooxygenase pathways, ie, prostanoids, and through the lipoxygenase pathways, ie, leukotrienes (LTs) and hydroxyeicosatetraenoic acids (HETEs), is increased in patients with chronic inflammatory bowel disease, and it is possible that mesalamine diminishes inflammation by blocking cyclooxygenase and inhibiting prostaglandin (PG) production in the colon.

Human Pharmacokinetics and Metabolism
Absorption. PENTASA is an ethylcellulose-coated, controlled-release formulation of mesalamine designed to release therapeutic quantities of mesalamine throughout the gastrointestinal tract. Based on urinary excretion data, 20% to 30% of the mesalamine in PENTASA is absorbed. In contrast, when mesalamine is administered orally as an unformulated 1-g aqueous suspension, mesalamine is approximately 80% absorbed.

Plasma mesalamine concentration peaked at approximately 1 μg/mL 3 hours following a 1-g PENTASA dose and declined in a biphasic manner. The literature describes a mean terminal half-life of 42 minutes for mesalamine following intravenous administration. Because of the continuous release and absorption of mesalamine from PENTASA throughout the gastrointestinal tract, the true elimination half-life cannot be determined after oral administration. N-acetylmesalamine, the major metabolite of mesalamine, peaked at approximately 3 hours at 1.8 μg/mL, and its concentration followed a biphasic decline. Pharmacological activities of N-acetylmesalamine are unknown, and other metabolites have not been identified.

PENTASA is indicated for the induction of remission and for the treatment of patients with mildly to moderately active ulcerative colitis.

PENTASA is contraindicated in patients who have demonstrated hypersensitivity to mesalamine, any other components of this medication, or salicylates.

Caution should be exercised if PENTASA is administered to patients with impaired hepatic function.

Mesalamine has been associated with an acute intolerance syndrome that may be difficult to distinguish from a flare of inflammatory bowel disease. Although the exact frequency of occurrence cannot be ascertained, it has occurred in 3% of patients in controlled clinical trials of mesalamine or sulfasalazine. Symptoms include cramping, acute abdominal pain and bloody diarrhea, sometimes fever, headache, and rash. If acute intolerance syndrome is suspected, prompt withdrawal is required. If a rechallenge is performed later in order to validate the hypersensitivity, it should be carried out under close medical supervision at reduced dose and only if clearly needed.

Caution should be exercised if PENTASA is administered to patients with impaired renal function. Single reports of nephrotic syndrome and interstitial nephritis associated with mesalamine therapy have been described in the foreign literature. There have been rare reports of interstitial nephritis in patients receiving PENTASA. In animal studies, a 13-week oral toxicity study in mice and 13-week and 52-week oral toxicity studies in rats and cynomolgus monkeys have shown the kidney to be the major target organ of mesalamine toxicity. Oral daily doses of 2400 mg/kg in mice and 1150 mg/kg in rats produced renal lesions including granular and hyaline casts, tubular degeneration, tubular dilation, renal infarct, papillary necrosis, tubular necrosis, and interstitial nephritis. In cynomolgus monkeys, oral daily doses of 250 mg/kg or higher produced nephrosis, papillary edema, and interstitial fibrosis. Patients with preexisting renal disease, increased BUN or serum creatinine, or proteinuria should be carefully monitored, especially during the initial phase of treatment. Mesalamine-induced nephrotoxicity should be suspected in patients developing renal dysfunction during treatment.

Use of mesalamine may lead to spuriously elevated test results when measuring urinary normetanephrine by liquid chromatography with electrochemical detection, because of the similarity in the chromatograms of normetanephrine and mesalamine's main metabolite, N-acetylaminosalicylic acid (N-Ac-5-ASA). An alternative, selective assay for normetanephrine should be considered.

There are no data on interactions between PENTASA and other drugs.

No evidence of mutagenicity was observed in an in vitro Ames test and in an in vivo mouse micronucleus test.

No effects on fertility or reproductive performance were observed in male or female rats at oral doses of mesalamine up to 400 mg/kg/day (0.8 times the recommended human dose based on body surface area).

Semen abnormalities and infertility in men, which have been reported in association with sulfasalazine, have not been seen with PENTASA capsules during controlled clinical trials.

Category B. Reproduction studies have been performed in rats at doses up to 1000 mg/kg/day (5900 mg/M2) and rabbits at doses of 800 mg/kg/day (6856 mg/M2) and have revealed no evidence of teratogenic effects or harm to the fetus due to mesalamine. There are, however, no adequate and well-controlled studies in pregnant women. Because animal reproduction studies are not always predictive of human response, PENTASA should be used during pregnancy only if clearly needed.

Caution should be exercised when PENTASA is administered to a nursing woman.

No controlled studies with PENTASA during breast-feeding have been carried out. Hypersensitivity reactions like diarrhea in the infant cannot be excluded.

In two domestic placebo-controlled trials involving over 600 ulcerative colitis patients, adverse events were fewer in PENTASA® (mesalamine)-treated patients than in the placebo group (PENTASA 14% vs placebo 18%) and were not dose-related. Events occurring in more than 1% are shown in the table below. Of these, only nausea and vomiting were more frequent in the PENTASA group. Withdrawal from therapy due to adverse events was more common on placebo than PENTASA (7% vs 4%).

Clinical laboratory measurements showed no significant abnormal trends for any test, including measurement of hematological, liver, and kidney function.

The following adverse events, presented by body system, were reported infrequently (ie, less than 1%) during domestic ulcerative colitis and Crohn's disease trials. In many cases, the relationship to PENTASA has not been established.

One week after completion of an 8-week ulcerative colitis study, a 72-year-old male, with no previous history of pulmonary problems, developed dyspnea. The patient was subsequently diagnosed with interstitial pulmonary fibrosis without eosinophilia by one physician and bronchiolitis obliterans with organizing pneumonitis by a second physician. A causal relationship between this event and mesalamine therapy has not been established.

Postmarketing Reports
The following events have been identified during post-approval use of the PENTASA brand of mesalamine in clinical practice. Because they are reported voluntarily from a population of unknown size, estimates of frequency cannot be made. These events have been chosen for inclusion due to a combination of seriousness, frequency of reporting, or potential causal connection to mesalamine:

Single oral doses of mesalamine up to 5 g/kg in pigs or a single intravenous dose of mesalamine at 920 mg/kg in rats were not lethal.

There is no clinical experience with PENTASA overdosage. PENTASA is an aminosalicylate, and symptoms of salicylate toxicity may be possible, such as: tinnitus, vertigo, headache, confusion, drowsiness, sweating, hyperventilation, vomiting, and diarrhea. Severe intoxication with salicylates can lead to disruption of electrolyte balance and blood-pH, hyperthermia, and dehydration.

Treatment of Overdosage. Since PENTASA is an aminosalicylate, conventional therapy for salicylate toxicity may be beneficial in the event of acute overdosage. This includes prevention of further gastrointestinal tract absorption by emesis and, if necessary, by gastric lavage. Fluid and electrolyte imbalance should be corrected by the administration of appropriate intravenous therapy. Adequate renal function should be maintained.

The recommended dosage for the induction of remission and the symptomatic treatment of mildly to moderately active ulcerative colitis is 1g (4 PENTASA 250 mg capsules or 2 PENTASA 500 mg capsules) 4 times a day for a total daily dosage of 4g. Treatment duration in controlled trials was up to 8 weeks. 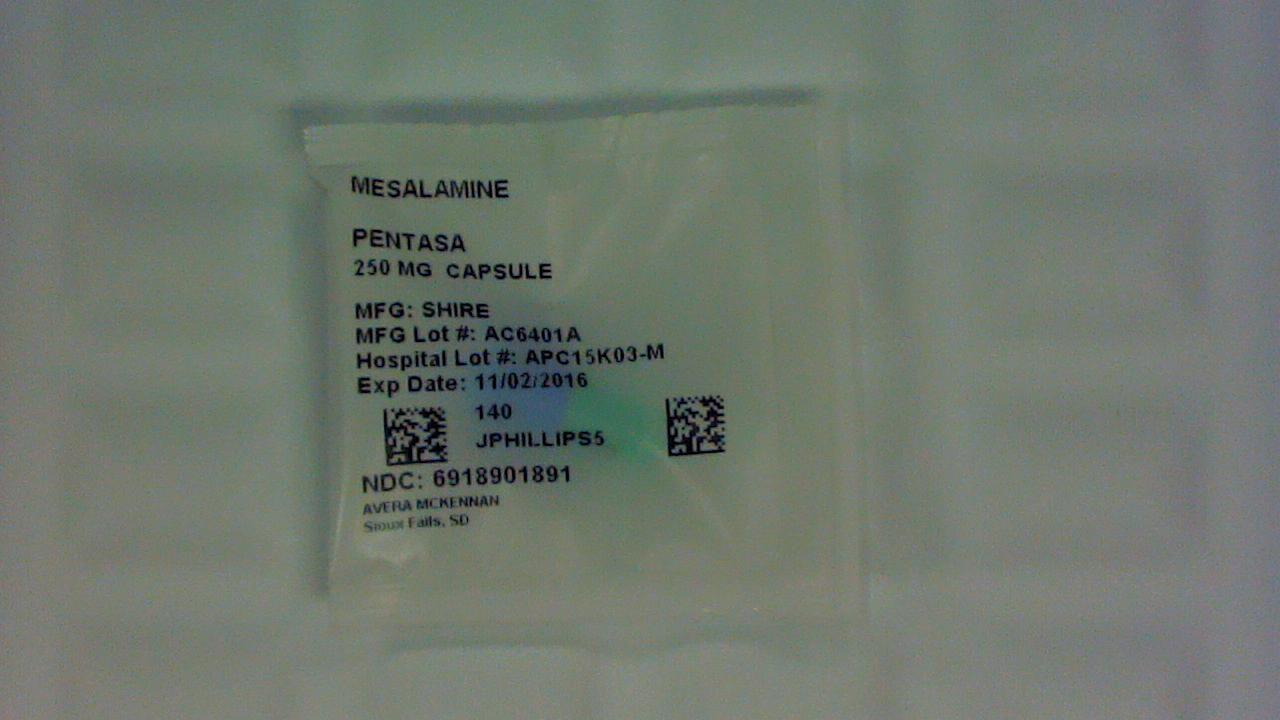