For treatment of active ulcerative colitis in adult patients, the usual dose is three 750 mg balsalazide capsules to be taken 3 times a day (6.75 g per day) for up to 8 weeks. Some patients in the adult clinical trials required treatment for up to 12 weeks.

Teeth and/or tongue staining may occur in some patients who use balsalazide in sprinkle form with food.

Patients with hypersensitivity to salicylates or to any of the components of Balsalazide Disodium Capsules or balsalazide metabolites. Hypersensitivity reactions may include, but are not limited to the following: anaphylaxis, bronchospasm, and skin reaction.

In the adult clinical trials, 3 out of 259 patients reported exacerbation of the symptoms of ulcerative colitis.

Observe patients closely for worsening of these symptoms while on treatment.

Patients with pyloric stenosis may have prolonged gastric retention of balsalazide capsules.

Renal toxicity has been observed in animals and patients given other mesalamine products. Therefore, caution should be exercised when administering balsalazide to patients with known renal dysfunction or a history of renal disease. [See 13 NONCLINICAL TOXICOLOGY (13.2)]

In the 4 controlled clinical trials patients receiving a balsalazide dose of 6.75 g/day most frequently reported the following adverse reactions: headache (8%), abdominal pain (6%), diarrhea (5%), nausea (5%), vomiting (4%), respiratory infection (4%), and arthralgia (4%). Withdrawal from therapy due to adverse reactions was comparable among patients on balsalazide and placebo.

Adverse reactions reported by 1% or more of patients who participated in the 4 well-controlled, Phase 3 trials are presented by treatment group (Table 1).

The number of placebo patients (35), however, is too small for valid comparisons. Some adverse reactions, such as abdominal pain, fatigue, and nausea were reported more frequently in women than in men. Abdominal pain, rectal bleeding, and anemia can be part of the clinical presentation of ulcerative colitis.

The following adverse reactions have been identified during post-approval use of balsalazide in clinical practice: myocarditis, pericarditis, vasculitis, pruritus, pleural effusion, pneumonia (with and without eosinophilia), alveolitis, renal failure,interstitial nephritis, pancreatitis, and alopecia.

Because these reactions are reported voluntarily from a population of unknown size, it is not always possible to reliably estimate their frequency or establish a causal relationship to drug exposure. These adverse reactions have been chosen for inclusion due to a combination of seriousness, frequency of reporting, or potential causal connection to balsalazide.

Postmarketing adverse reactions of hepatotoxicity have been reported for products which contain (or are metabolized to) mesalamine, including elevated liver function tests (SGOT/AST, SGPT/ALT, GGT, LDH, alkaline phosphatase, bilirubin), jaundice, cholestatic jaundice, cirrhosis, hepatocellular damage including liver necrosis and liver failure. Some of these cases were fatal; however, no fatalities associated with these adverse reactions were reported in balsalazide clinical trials. One case of Kawasaki-like syndrome which included hepatic function changes was also reported, however, this adverse reaction was not reported in balsalazide clinical trials.

In an in vitro study using human liver microsomes, balsalazide and its metabolites [5-aminosalicylic acid (5-ASA), N-acetyl-5-aminosalicylic acid (N-Ac-5-ASA), 4-aminobenzoyl-ß-alanine (4-ABA) and N-acetyl-4-aminobenzoyl-ß–alanine (N-Ac-4-ABA)] were not shown to inhibit the major CYP enzymes evaluated (CYP1A2, CYP2C9, CYP2C19, CYP2D6, and CYP3A4/5). Therefore, balsalazide and its metabolites are not expected to inhibit the metabolism of other drugs which are substrates of CYP1A2, CYP2C9, CYP2C19, CYP2D6, or CYP3A4/5.

Pregnancy Category B. Reproduction studies were performed in rats and rabbits at oral doses up to 2 g/kg/day, 2.4 and 4.7 times the recommended human dose based on body surface area for the rat and rabbit, respectively, and revealed no evidence of impaired fertility or harm to the fetus due to balsalazide disodium. There are, however, no adequate and well-controlled studies in pregnant women. Because animal reproduction studies are not always predictive of human response, this drug should be used during pregnancy only if clearly needed.

Pediatric use information is protected by marketing exclusivity.

No case of overdose has occurred with balsalazide. A 3-year-old boy is reported to have ingested 2 g of another mesalamine product. He was treated with ipecac and activated charcoal with no adverse reactions.

If an overdose occurs with balsalazide, treatment should be supportive, with particular attention to correction of electrolyte abnormalities.

Each Balsalazide Disodium Capsule contains 750 mg of balsalazide disodium, a prodrug that is enzymatically cleaved in the colon to produce mesalamine (5-aminosalicylic acid or 5-ASA), an anti-inflammatory drug. Each capsule of balsalazide (750 mg) is equivalent to 267 mg of mesalamine. Balsalazide disodium has the chemical name (E)-5-[[-4-[[(2-carboxyethyl) amino]carbonyl] phenyl]azo]-2-hydroxybenzoic acid, disodium salt, dihydrate. Its structural formula is:

Balsalazide disodium is a stable, odorless orange to yellow microcrystalline powder. It is freely soluble in water and isotonic saline, sparingly soluble in methanol and ethanol, and practically insoluble in all other organic solvents.

Balsalazide disodium is delivered intact to the colon where it is cleaved by bacterial azoreduction to release equimolar quantities of mesalamine, which is the therapeutically active portion of the molecule, and the 4-aminobenzoyl-ß-alanine carrier moiety. The carrier moiety released when balsalazide disodium is cleaved is only minimally absorbed and is largely inert.

The mechanism of action of 5-ASA is unknown, but appears to be local to the colonic mucosa rather than systemic. Mucosal production of arachidonic acid metabolites, both through the cyclooxygenase pathways, i.e., prostanoids, and through the lipoxygenase pathways, i.e., leukotrienes and hydroxyeicosatetraenoic acids, is increased in patients with chronic inflammatory bowel disease, and it is possible that 5-ASA diminishes inflammation by blocking production of arachidonic acid metabolites in the colon.

Balsalazide capsules contain a powder of balsalazide disodium that is insoluble in acid and designed to be delivered to the colon as the intact prodrug. Upon reaching the colon, bacterial azoreductases cleave the compound to release 5-ASA, the therapeutically active portion of the molecule, and 4-aminobenzoyl-ß-alanine. The 5-ASA is further metabolized to yield N-acetyl-5-aminosalicylic acid (N-Ac-5-ASA), a second key metabolite.

A relatively low systemic exposure was observed under all three administered conditions (fasting, fed with high-fat meal, sprinkled on applesauce), which reflects the variable, but minimal absorption of balsalazide disodium and its metabolites. The data indicate that both Cmax and AUClast were lower, while Tmax was markedly prolonged, under fed (high-fat meal) compared to fasted conditions. Moreover, the data suggest that dosing balsalazide disodium as a sprinkle or as a capsule provides highly variable, but relatively similar mean pharmacokinetic parameter values. No inference can be made as to how the systemic exposure differences of balsalazide and its metabolites in this study might predict the clinical efficacy under different dosing conditions (i.e., fasted, fed with high-fat meal, or sprinkled on applesauce) since clinical efficacy after balsalazide disodium administration is presumed to be primarily due to the local effects of 5-ASA on the colonic mucosa.

In a separate study of adult patients with ulcerative colitis, who received balsalazide, 1.5 g twice daily, for over 1 year, systemic drug exposure, based on mean AUC values, was up to 60 times greater (0.008 mcg·hr/mL to 0.48 mcg·hr/mL) when compared to that obtained in healthy subjects who received the same dose.

The binding of balsalazide to human plasma proteins was ≥99%.

The products of the azoreduction of this compound, 5-ASA and 4-aminobenzoyl-ß-alanine, and their N-acetylated metabolites have been identified in plasma, urine and feces.

In a study with 10 healthy volunteers, 65% of a single 2.25 g dose of balsalazide was recovered as 5-ASA, 4-aminobenzoyl-ß-alanine, and the N-acetylated metabolites in feces, while <1% of the dose was recovered as parent compound.

In a study that examined the disposition of balsalazide in patients who were taking 3 to 6 g of balsalazide daily for more than 1 year and who were in remission from ulcerative colitis, less than 1% of an oral dose was recovered as intact balsalazide in the urine. Less than 4% of the dose was recovered as 5-ASA, while virtually no 4-aminobenzoyl-ß-alanine was detected in urine. The mean urinary recovery of N-Ac-5-ASA and N-acetyl-4-aminobenzoyl-ß-alanine comprised <16% and <12% of the balsalazide dose, respectively. No fecal recovery studies were performed in this population.

All pharmacokinetic studies with balsalazide are characterized by large variability in the plasma concentration versus time profiles for balsalazide and its metabolites, thus half-life estimates of these analytes are indeterminate.

In a 24-month rat (Sprague Dawley) carcinogenicity study, oral (dietary) balsalazide disodium at doses up to 2 g/kg/day was not tumorigenic. For a 50 kg person of average height this dose represents 2.4 times the recommended human dose on a body surface area basis. Balsalazide disodium was not genotoxic in the following in vitro or in vivo tests: Ames test, human lymphocyte chromosomal aberration test, and mouse lymphoma cell (L5178Y/TK+/-) forward mutation test, or mouse micronucleus test. However, it was genotoxic in the in vitro Chinese hamster lung cell (CH V79/HGPRT) forward mutation test.

In animal studies conducted at doses up to 2000 mg/kg (approximately 21 times the recommended 6.75 g/day dose on a mg/kg basis for a 70 kg person), balsalazide demonstrated no nephrotoxic effects in rats or dogs.

Two randomized, double-blind studies were conducted in adults. In the first trial, 103 patients with active mild-to-moderate ulcerative colitis with sigmoidoscopy findings of friable or spontaneously bleeding mucosa were randomized and treated with balsalazide 6.75 g/day or balsalazide 2.25 g/day. The primary efficacy endpoint was reduction of rectal bleeding and improvement of at least one of the other assessed symptoms (stool frequency, patient functional assessment, abdominal pain, sigmoidoscopic grade, and physician’s global assessment [PGA]). Outcome assessment for rectal bleeding at each interim period (week 2, 4, and 8) encompassed a 4-day period (96 hours). Results demonstrated a statistically significant difference between high and low doses of balsalazide (Figure 1). 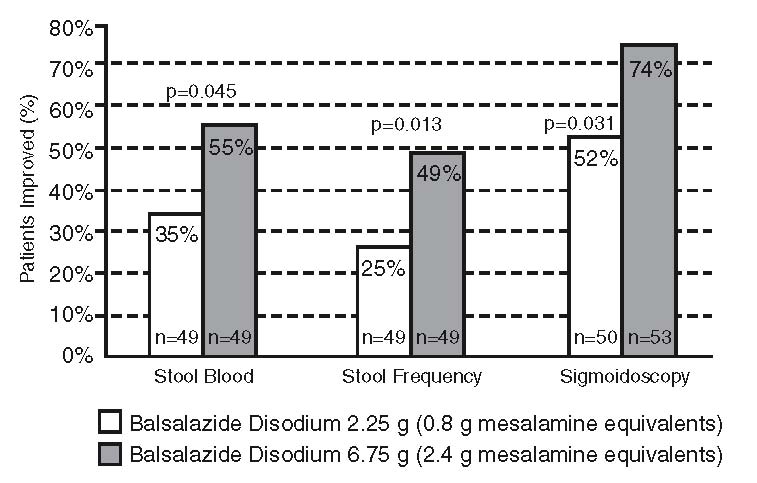 17.2 What Patients Should Know About Adverse Reactions

17.3 What Patients Should Know About Taking Balsalazide with Other Medication 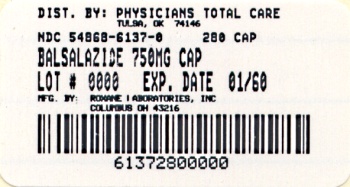