Lorazepam, an antianxiety agent, has the chemical formula, 7-chloro-5-(o-chlorophenyl)- 1,3-dihydro-3-hydroxy-2H-1,4-benzodiazepin-2-one. Its molecular formula is C15H10Cl2N2O2 and its structural formula is: 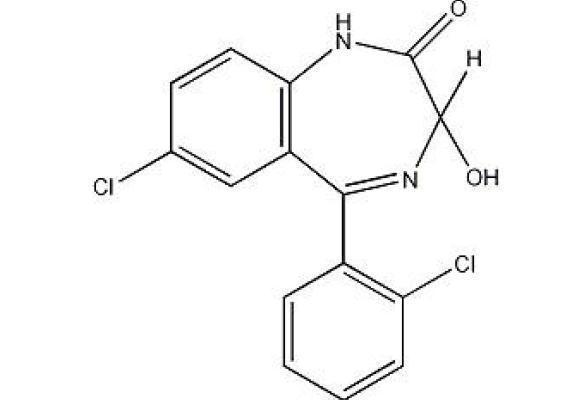 It is a white to practically white, practically odorless powder. It is insoluble in water, sparingly soluble in alcohol, and slightly soluble in chloroform. Each tablet, to be taken orally, contains 0.5 mg, 1 mg, or 2 mg of lorazepam, USP.

Lorazepam tablets, USP are indicated for the management of anxiety disorders or for the short-term relief of the symptoms of anxiety or anxiety associated with depressive symptoms. Anxiety or tension associated with the stress of everyday life usually does not require treatment with an anxiolytic.

Use of benzodiazepines, including lorazepam, both used alone and in combination with other CNS depressants, may lead to potentially fatal respiratory depression. (See PRECAUTIONS, Clinically Significant Drug Interactions).

In general, benzodiazepines should be prescribed for short periods only (e.g. 2 to 4 weeks). Extension of the treatment period should not take place without reevaluation of the need for continued therapy. Continuous long-term use of product is not recommended. Withdrawal symptoms (e.g. rebound insomnia) can appear following cessation of recommended doses after as little as one week of therapy. Abrupt discontinuation of product should be avoided and a gradual dosage-tapering schedule followed after extended therapy.

Reproductive studies in animals were performed in mice, rats, and two strains of rabbits. Occasional anomalies (reduction of tarsals, tibia, metatarsals, malrotated limbs, gastroschisis, malformed skull, and microphthalmia) were seen in drug-treated rabbits without relationship to dosage. AIthough all of these anomalies were not present in the concurrent control group, they have been reported to occur randomly in historical controls. At doses of 40 mg/kg and higher, there was evidence of fetal resorption and increased fetal loss in rabbits which was not seen at lower doses.

Overdosage of benzodiazepines is usually manifested by varying degrees of central nervous system depression ranging from drowsiness to coma. In mild cases, symptoms include drowsiness, mental confusion paradoxical reactions, dysarthria and lethargy. In more serious cases, and especially when other drugs or alcohol were ingested, symptoms may include ataxia, hypotonia, hypotension, cardiovascular depression, respiratory depression, hypnotic state, coma, and death.

Lorazepam tablets, USP are administered orally. For optimal results, dose, frequency of administration, and duration of therapy should be individualized according to patient response. To facilitate this, 0.5 mg, 1 mg, and 2 mg tablets are available.

Lorazepam tablets, USP 0.5 mg, white to off-white, round, flat faced, beveled edged tablets, debossed with “RX7” on one side and plain on the other side. They are supplied as follows:

Lorazepam tablets, USP 1 mg, white to off-white, round, flat faced, beveled edged tablets, debossed with “RX” above the bisect and “773” below the bisect on one side and plain on the other side. They are supplied as follows:

Lorazepam tablets, USP 2 mg, white to off-white, round, flat faced, beveled edged tablets, debossed with “RX” above the bisect and “774” below the bisect on one side and plain on the other side. They are supplied as follows: