Oral terbutaline sulfate has not been approved and should not be used for acute or maintenance  tocolysis. In particular, terbutaline sulfate should not be used for maintenance tocolysis in the outpatient or home setting. Serious adverse reactions, including death, have been reported after administration of terbutaline sulfate to pregnant women. In the mother, these adverse reactions include increased heart rate, transient hyperglycemia, hypokalemia, cardiac arrhythmias, pulmonary edema and myocardial ischemia. Increased fetal heart rate and neonatal hypoglycemia may occur as a result of maternal administration (see CONTRAINDICATIONS, Tocolysis). 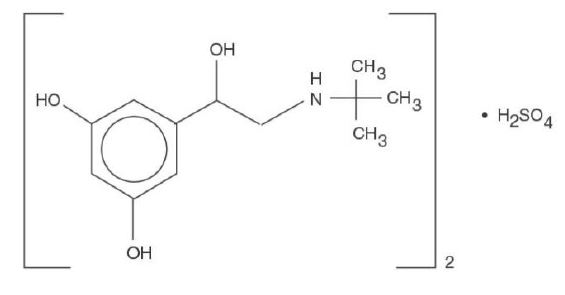 Terbutaline sulfate, USP is a white to gray-white crystalline powder. It is odorless or has a faint odor of acetic acid. It is soluble in water and in 0.1N hydrochloric acid, slightly soluble in methanol, and insoluble in chloroform. Its molecular weight is 548.65.

In vitro and in vivo pharmacologic studies have demonstrated that terbutaline exerts a preferential effect on beta2-adrenergic receptors. While it is recognized that beta2-adrenergic receptors are the predominant receptors in bronchial smooth muscle, data indicate that there is a population of beta2-receptors in the human heart, existing in a concentration between 10% to 50%. The precise function of these receptors has not been established (see WARNINGS). In controlled clinical studies in patients given terbutaline sulfate orally, proportionally greater changes occurred in pulmonary function parameters than in heart rate or blood pressure. While this suggests a relative preference for the beta2-receptors in man, the usual cardiovascular effects commonly associated with other sympathomimetic agents were also observed with terbutaline sulfate.

The pharmacologic effects of beta-adrenergic agonists, including terbutaline, are at least in part attributable to stimulation through beta-adrenergic receptors of intracellular adenyl cyclase, the enzyme which catalyzes the conversion of adenosine triphosphate (ATP) to cyclic 3', 5'-adenosine monophosphate (cAMP). Increased cAMP levels are associated with relaxation of bronchial smooth muscle and inhibition of release of mediators of immediate hypersensitivity from cells, especially from mast cells.

Controlled clinical studies have shown that terbutaline sulfate relieves bronchospasm in chronic obstructive pulmonary disease by significantly increasing pulmonary function (e.g., an increase of 15% or more in FEV1 and in FEF25% to 75%). After administration of terbutaline sulfate tablets, a measurable change in flow rate usually occurs within 30 minutes, and a clinically significant improvement in pulmonary function occurs within 60 to 120 minutes. The maximum effect usually occurs within 120 to 180 minutes. Terbutaline sulfate also produces a clinically significant decrease in airway and pulmonary resistance, which persists for 4 hours or longer. Significant bronchodilator action (as measured by airway resistance, FEF25% to 75% or PEFR) has also been demonstrated for up to 8 hours in some studies.

In studies comparing the effectiveness of terbutaline sulfate with that of ephedrine for up to 3 months, both drugs maintained a significant improvement in pulmonary function throughout this period of treatment.

Studies in laboratory animals (minipigs, rodents, and dogs) have demonstrated the occurrence of cardiac arrhythmias and sudden death (with histologic evidence of myocardial necrosis) when beta-agonists and methylxanthines were administered concurrently. The clinical significance of these findings is unknown.

After oral administration of terbutaline, 51 to 62 mcg/kg of body weight, to 3 healthy male subjects, peak serum levels of 3.1 to 6.2 ng/mL were observed 1 to 3 hours later. In the same study, after 3 days only 30% to 50% of the dose was recovered from urine and the remainder from the feces, which may indicate poor absorption.

After an oral dose to asthmatic patients, the elimination half-life of terbutaline was approximately 3.4 hours.

About 90% of the drug was excreted in the urine at 96 hours after subcutaneous administration, with about 60% of this being unchanged drug. The sulfate conjugate is a major metabolite of terbutaline, and urinary excretion is the primary route of elimination.

There are no reports of any clinical pharmacokinetic studies investigating dose proportionality, effect of food, or special population studies with terbutaline.

Terbutaline sulfate tablets are indicated for the prevention and reversal of bronchospasm in patients 12 years of age and older with asthma and reversible bronchospasm associated with bronchitis and emphysema.

Oral terbutaline sulfate has not been approved and should not be used for acute or maintenance tocolysis (see BOXED WARNING: Tocolysis).

Terbutaline sulfate is contraindicated in patients known to be hypersensitive to sympathomimetic amines or any components of this drug product.

Asthma may deteriorate acutely over a period of hours or chronically over several days or longer. If the patient needs more doses of terbutaline sulfate than usual, this may be a marker of destabilization of asthma and requires reevaluation of the patient and the treatment regimen, giving special consideration to the possible need for anti-inflammatory treatment, e.g., corticosteroids.

Terbutaline sulfate, like all other beta-adrenergic agonists, can produce a clinically significant cardiovascular effect in some patients as measured by pulse rate, blood pressure, and/or symptoms. Although such effects are uncommon after administration of terbutaline sulfate at recommended doses, if they occur, the drug may need to be discontinued. In addition, beta-agonists have been reported to produce electrocardiogram (ECG) changes, such as flattening of the T wave, prolongation of the QTc interval, and ST segment depression. The clinical significance of these findings is unknown. Therefore, terbutaline sulfate, like all sympathomimetic amines, should be used with caution in patients with cardiovascular disorders, especially coronary insufficiency, cardiac arrhythmias, and hypertension.

There have been rare reports of seizures in patients receiving terbutaline; seizures did not recur in these patients after the drug was discontinued.

Terbutaline, as with all sympathomimetic amines, should be used with caution in patients with cardiovascular disorders, including ischemic heart disease, hypertension, and cardiac arrhythmias; hyperthyroidism; diabetes mellitus; hypersensitivity to sympathomimetic amines; and convulsive disorders. Significant changes in systolic and diastolic blood pressure have been seen and could be expected to occur in some patients after use of any beta-adrenergic bronchodilator.

Immediate hypersensitivity reactions and exacerbation of bronchospasm have been reported after terbutaline administration.

Beta-adrenergic agonist medications may produce significant hypokalemia in some patients, possibly through intracellular shunting, which has the potential to produce adverse cardiovascular effects. The decrease is usually transient, not requiring supplementation.

Large doses of intravenous terbutaline sulfate have been reported to aggravate preexisting diabetes and ketoacidosis.

The concomitant use of terbutaline sulfate with other sympathomimetic agents is not recommended, since the combined effect on the cardiovascular system may be deleterious to the patient. However, this does not preclude the use of an aerosol bronchodilator of the adrenergic-stimulant type for the relief of an acute bronchospasm in patients receiving chronic oral therapy with terbutaline sulfate.

Terbutaline sulfate should be administered with extreme caution to patients being treated with monoamine oxidase inhibitors or tricyclic antidepressants, or within 2 weeks of discontinuation of such agents, since the action of terbutaline sulfate on the vascular system may be potentiated.

Beta-adrenergic receptor blocking agents not only block the pulmonary effect of beta-agonists, such as terbutaline sulfate, but may produce severe bronchospasm in asthmatic patients. Therefore, patients with asthma should not normally be treated with beta-blockers. However, under certain circumstances, e.g., as prophylaxis after myocardial infarction, there may be no acceptable alternatives to the use of beta-adrenergic blocking agents in patients with asthma. In this setting, cardioselective beta-blockers could be considered, although they should be administered with caution.

Reproduction studies in rats using terbutaline sulfate demonstrated no impairment of fertility at oral doses up to 50 mg/kg (approximately 25 times the maximum recommended daily oral dose for adults on a mg/m2 basis).

There are no adequate and well-controlled studies of terbutaline sulfate in pregnant women. Published animal studies show that rat offspring exhibit alterations in behavior and brain development, including decreased cellular proliferation and differentiation when dams were treated subcutaneously with terbutaline during the late stage of pregnancy and lactation period. Terbutaline exposures in rat dams were approximately 6.5 times the common human dose in adults of 15 mg/day, on a mg/m2 basis.

Oral terbutaline sulfate has not been approved and should not be used for acute or maintenance tocolysis. In particular, terbutaline sulfate should not be used for tocolysis in the outpatient or home setting. Serious adverse reactions, including death, have been reported after administration of terbutaline sulfate to pregnant women. In the mother, these adverse reactions include increased heart rate, transient hyperglycemia, hypokalemia, cardiac arrhythmias, pulmonary edema and myocardial ischemia. Increased fetal heart rate and neonatal hypoglycemia may occur as a result of maternal administration (see BOXED WARNING: Tocolysis and CONTRAINDICATIONS, Tocolysis).

In animal embryofetal development studies, no teratogenic effects were observed in offspring when pregnant rats and rabbits received terbutaline sulfate at oral doses up to 50 mg/kg/day, approximately 32 and 65 times, respectively, the maximum recommended daily oral dose for adults, on a mg/m2 basis.

Because of the potential for beta-agonist interference with uterine contractility, use of terbutaline sulfate for relief of bronchospasm during labor should be restricted to those patients in whom the benefits clearly outweigh the risk.

Terbutaline crosses the placenta. After single-dose IV (intra-venous) administration of terbutaline to 22 women in late pregnancy who were delivered by elective Cesarean section due to clinical reasons, umbilical blood levels of terbutaline were found to range from 11% to 48% of the maternal blood levels.

It is not known whether this drug is excreted in human milk. Therefore, terbutaline sulfate should be used during nursing only if the potential benefit justifies the possible risk to the newborn.

Terbutaline sulfate is not recommended for patients under the age of 12 years because of insufficient clinical data to establish safety and effectiveness (see DOSAGE AND ADMINISTRATION).

Adverse reactions observed with terbutaline sulfate are similar to those commonly seen with other sympathomimetic amines. All of these reactions are generally transient in nature and usually do not require treatment. The frequency of these side effects appears to diminish with continued therapy.

There have been rare reports of elevation in liver enzymes and of hypersensitivity vasculitis.

The usual oral dose of terbutaline sulfate for adults is 5 mg administered at approximately six-hour intervals, three times daily, during the hours the patient is usually awake. If side effects are particularly disturbing, the dose may be reduced to 2.5 mg three times daily, and still provide a clinically significant improvement in pulmonary function. The total dose within 24 hours should not exceed 15 mg.

Terbutaline sulfate is not recommended for use in children below the age of 12 years. A dosage of 2.5 mg three times daily is recommended for children 12 to 15 years of age. The total dose within 24 hours should not exceed 7.5 mg.

If a previously effective dosage regimen fails to provide the usual relief, medical advice should be sought immediately as this is often a sign of seriously worsening asthma that would require reassessment of therapy.

The expected symptoms with overdosage are those of excessive beta-adrenergic stimulation and/or occurrence or exaggeration of any of the symptoms listed under ADVERSE REACTIONS, e.g., seizures, angina, hypertension or hypotension, tachycardia with rates up to 200 beats per minute, arrhythmias, nervousness, headache, tremor, dry mouth, palpitation, nausea, dizziness, fatigue, malaise, and insomnia. Hypokalemia may also occur.

There is no specific antidote. Treatment consists of discontinuation of terbutaline sulfate together with appropriate symptomatic therapy. The judicious use of a cardioselective beta-receptor blocker may be considered, bearing in mind that such medication can produce bronchospasm. There is insufficient evidence to determine if dialysis is beneficial for overdosage of terbutaline sulfate.

In the alert patient who has taken excessive oral medication, the stomach should be emptied by induced emesis followed by lavage. In the unconscious patient, the airway should be secured with a cuffed endotracheal tube before lavage, and emesis should not be induced. Instillation of activated charcoal slurry may help reduce absorption of terbutaline. Adequate respiratory exchange should be maintained, and cardiac and respiratory support provided as needed. The patient should be monitored until signs and symptoms of overdosage have subsided.

Terbutaline sulfate tablets, USP are packaged in bottles of 100 and 500 tablets. Descriptions of the 2.5 mg and 5 mg tablets follow:

Tablets 5 mg–Each off-white, round, convex tablet debossed with "G" on one side and "2622" on the other side