Methimazole (1-methylimidazole-2-thiol) is a white, crystalline substance that is freely soluble in water. It differs chemically from the drugs of the thiouracil series primarily because it has a 5- instead of a 6-membered ring. 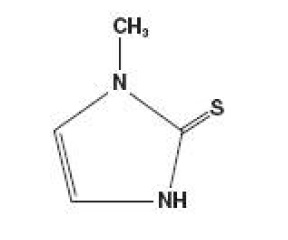 Methimazole inhibits the synthesis of thyroid hormones and thus is effective in the treatment of hyperthyroidism. The drug does not inactivate existing thyroxine and tri-iodothyronine that are stored in the thyroid or circulating in the blood nor does it interfere with the effectiveness of thyroid hormones given by mouth or by injection.

Methimazole is readily absorbed in the gastrointestinal tract, metabolized in the liver, and excreted in the urine.

Methimazole tablets are contraindicated in the presence of hypersensitivity to the drug or any of the other product components.

First Trimester Use of Methimazole and Congenital Malformations

Methimazole crosses the placental membranes and can cause fetal harm, when administered in the first trimester of pregnancy. Rare instances of congenital defects, including aplasia cutis, craniofacial malformations (facial dysmorphism; choanal atresia), gastrointestinal malformations (esophageal atresia with or without tracheoesophageal fistula) omphalocele and abnormalities of the omphalomesenteric duct have occurred in infants born to mothers who received methimazole tablets in the first trimester of pregnancy. If methimazole tablets are used during pregnancy or if the patient becomes pregnant while taking this drug, the patient should be warned of the potential hazard to the fetus.

Because of the risk for congenital malformations associated with use of methimazole tablets in the first trimester of pregnancy it may be appropriate to use other agents in pregnant women requiring treatment for hyperthyroidism. If methimazole tablets are used, the lowest possible dose to control the maternal disease should be given.

Agranulocytosis is potentially a life-threatening adverse reaction of methimazole therapy.

Although there have been reports of hepatotoxicity (including acute liver failure) associated with methimazole, the risk of hepatotoxicity appears to be less with methimazole than with propylthiouracil, especially in the pediatric population. Symptoms suggestive of hepatic dysfunction (anorexia, pruritis, right upper quadrant pain, etc.) should prompt evaluation of liver function (bilirubin, alkaline phosphatase) and hepatocellular integrity (ALT, AST). Drug treatment should be discontinued promptly in the event of clinically significant evidence of liver abnormality including hepatic transaminase values exceeding 3 times the upper limit of normal.

Methimazole can cause hypothyroidism necessitating routine monitoring of TSH and free T4 levels with adjustments in dosing to maintain a euthyroid state. Because the drug readily crosses placental membranes, methimazole can cause fetal goiter and cretinism when administered to a pregnant woman. For this reason, it is important that a sufficient, but not excessive, dose be given during pregnancy (see PRECAUTIONS, Pregnancy).

Patients who receive methimazole should be under close surveillance and should be cautioned to report immediately any evidence of illness, particularly sore throat, skin eruptions, fever, headache, or general malaise. In such cases, white-blood-cell and differential counts should be obtained to determine whether agranulocytosis has developed. Particular care should be exercised with patients who are receiving additional drugs known to cause agranulocytosis.

Patients should be advised that if they become pregnant or intend to become pregnant while taking an antithyroid drug, they should contact their physician immediately about their therapy.

Inform patients that cases of vasculitis resulting in severe complications have occurred with methimazole tablets. Inform patients to promptly report symptoms that may be associated with vasculitis including new rash, hematuria or decreased urine output, dyspnea or hemoptysis (see WARNINGS and ADVERSE REACTIONS).

Because methimazole may cause hypoprothrombinemia and bleeding, prothrombin time should be monitored during therapy with the drug, especially before surgical procedures. Thyroid function tests should be monitored periodically during therapy. Once clinical evidence of hyperthyroidism has resolved, the finding of a rising serum TSH indicates that a lower maintenance dose of methimazole tablets should be employed.

Due to potential inhibition of vitamin K activity by methimazole, the activity of oral anticoagulants (e.g., warfarin) may be increased; additional monitoring of PT/INR should be considered, especially before surgical procedures.

Hyperthyroidism may cause an increased clearance of beta blockers with a high extraction ratio. A dose reduction of beta-adrenergic blockers may be needed when a hyperthyroid patient becomes euthyroid.

Theophylline clearance may decrease when hyperthyroid patients on a stable theophylline regimen become euthyroid; a reduced dose of theophylline may be needed.

In a 2 year study, rats were given methimazole at doses of 0.5, 3, and 18 mg/kg/day. These doses were 0.3, 2, and 12 times the 15 mg/day maximum human maintenance dose (when calculated on the basis of surface area). Thyroid hyperplasia, adenoma, and carcinoma developed in rats at the two higher doses. The clinical significance of these findings is unclear.

If methimazole tablets are used during the first trimester of pregnancy or if the patient becomes pregnant while taking this drug, the patient should be warned of the potential hazard to the fetus.

In pregnant women with untreated or inadequately treated Graves' disease, there is an increased risk of adverse events of maternal heart failure, spontaneous abortion, preterm birth, stillbirth and fetal or neonatal hyperthyroidism.

Because methimazole crosses placental membranes and can induce goiter and cretinism in the developing fetus, hyperthyroidism should be closely monitored in pregnant women and treatment adjusted such that a sufficient, but not excessive, dose be given during pregnancy. In many pregnant women, the thyroid dysfunction diminishes as the pregnancy proceeds; consequently, a reduction of dosage may be possible. In some instances, anti-thyroid therapy can be discontinued several weeks or months before delivery.

Due to the rare occurrence of congenital malformations associated with methimazole use, it may be appropriate to use an alternative anti-thyroid medication in pregnant women requiring treatment for hyperthyroidism particularly in the first trimester of pregnancy during organogenesis.

Given the potential maternal adverse effects of propylthiouracil (e.g., hepatotoxicity), it may be preferable to switch from propylthiouracil to methimazole for the second and third trimesters.

Methimazole is present in breast milk. However, several studies found no effect on clinical status in nursing infants of mothers taking methimazole. A long-term study of 139 thyrotoxic lactating mothers and their infants failed to demonstrate toxicity in infants who are nursed by mothers receiving treatment with methimazole. Monitor thyroid function at frequent (weekly or biweekly) intervals.

Because of postmarketing reports of severe liver injury in pediatric patient treated with propylthiouracil, methimazole is the preferred choice when an antithyroid drug is required for a pediatric patient (see DOSAGE AND ADMINISTRATION).

Major adverse reactions (which occur with much less frequency than the minor adverse reactions) include inhibition of myelopoiesis (agranulocytosis, granulocytopenia, thrombocytopenia, and aplastic anemia), drug fever, a lupus-like syndrome, insulin autoimmune syndrome (which can result in hypoglycemic coma), hepatitis (jaundice may persist for several weeks after discontinuation of the drug), periarteritis, and hypoprothrombinemia. Nephritis occurs very rarely. There have been postmarketing case reports of acute pancreatitis.

There are reports of a vasculitis, often associated with the presence of anti-neutrophilic cytoplasmic antibodies (ANCA), resulting in severe complications (see WARNINGS).

Symptoms may include nausea, vomiting, epigastric distress, headache, fever, joint pain, pruritus, and edema. Aplastic anemia (pancytopenia) or agranulocytosis may be manifested in hours to days. Less frequent events are hepatitis, nephrotic syndrome, exfoliative dermatitis, neuropathies, and CNS stimulation or depression. No information is available on the median lethal dose of the drug or the concentration of methimazole in biologic fluids associated with toxicity and/or death.

To obtain up-to-date information about the treatment of overdose, a good resource is your certified Regional Poison Control Center. In managing overdosage, consider the possibility of multiple drug overdoses, interaction among drugs, and unusual drug kinetics in the patient.

In the event of an overdose, appropriate supportive treatment should be initiated as dictated by the patient's medical status.

Methimazole tablets are administered orally. The total daily dosage is usually given in 3 divided doses at approximately 8-hour intervals.

Pediatric - Initially, the daily dosage is 0.4 mg/kg of body weight divided into 3 doses and given at 8-hour intervals. The maintenance dosage is approximately 1/2 of the initial dose. 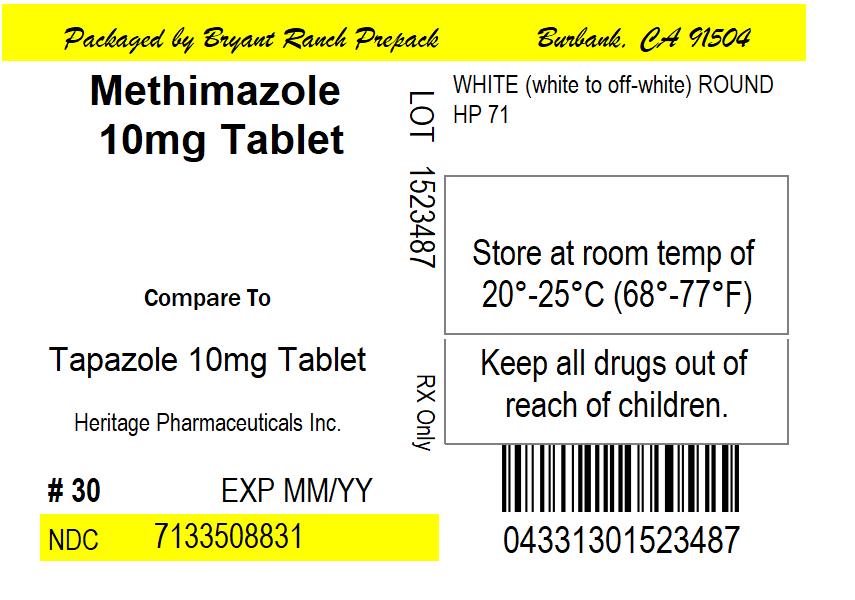