The active ingredient in DIPENTUM Capsules (olsalazine sodium) is the sodium salt of a salicylate, disodium 3,3'-azobis (6-hydroxybenzoate) a compound that is effectively bioconverted to 5-aminosalicylic acid (5-ASA), which has anti-inflammatory activity in ulcerative colitis. Its empirical formula is C H N Na O with a molecular weight of 346.21. 148226

Olsalazine sodium is a yellow crystalline powder, which melts with decomposition at 240°C. It is the sodium salt of a weak acid, soluble in water and DMSO, and practically insoluble in ethanol, chloroform, and ether. Olsalazine sodium has acceptable stability under acidic or basic conditions.

After oral administration, olsalazine has limited systemic bioavailability. Based on oral and intravenous dosing studies, approximately 2.4% of a single 1.0 g oral dose is absorbed. Less than 1% of olsalazine is recovered in the urine. The remaining 98 to 99% of an oral dose will reach the colon, where each molecule is rapidly converted into two molecules of 5-aminosalicylic acid (5-ASA) by colonic bacteria and the low prevailing redox potential found in this environment. The liberated 5-ASA is absorbed slowly resulting in very high local concentrations in the colon.

The conversion of olsalazine to mesalamine (5-ASA) in the colon is similar to that of sulfasalazine, which is converted into sulfapyridine and mesalamine. It is thought that the mesalamine component is therapeutically active in ulcerative colitis (A.K. Azad-Kahn et al, , 2:892-895, 1977). The usual dose of sulfasalazine for maintenance of remission in patients with ulcerative colitis is 2 grams daily, which would provide approximately 0.8 gram of mesalamine to the colon. More than 0.9 gram of mesalamine would usually be made available in the colon from 1 gram of olsalazine. LANCET

The mechanism of action of mesalamine (and sulfasalazine) is unknown, but appears to be topical rather than systemic. Mucosal production of arachidonic acid (AA) metabolites, both through the cyclooxygenase pathways (i.e., prostanoids) and through the lipoxygenase pathways (i.e., leukotrienes [LTs] and hydroxyeicosatetraenoic acids [HETEs]) is increased in patients with chronic inflammatory bowel disease, and it is possible that mesalamine diminishes inflammation by blocking cyclooxygenase and inhibiting prostaglandin (PG) production in the colon.

Patients on daily doses of 1.0 g olsalazine for 2 to 4 years show a stable plasma concentration of olsalazine-S (3.3 to 12.4 µmol/L). Olsalazine-S is more than 99% bound to plasma proteins. Its long half-life is mainly due to slow dissociation from the protein binding site. Less than 1% of both olsalazine and olsalazine-S appears undissociated in plasma.

N-acetyl-5-ASA (Ac-5-ASA), the major metabolite of 5-ASA found in plasma and urine, is acetylated (deactivated) in at least two sites, the colonic epithelium and the liver. Ac-5-ASA is found in the serum, with peak values of 1.7 to 8.7 µmol/L after a single 1.0 g dose. Approximately 20% of the total 5-ASA is recovered in the urine, where it is found almost exclusively as Ac-5-ASA. The remaining 5-ASA is partially acetylated and is excreted in the feces. From fecal dialysis, the concentration of 5-ASA in the colon following olsalazine has been calculated to be 18 to 49 mmol/L. No accumulation of 5-ASA or Ac-5-ASA in plasma has been detected. 5-ASA and Ac-5-ASA are 74 and 81%, respectively, bound to plasma proteins.

Preclinical subacute and chronic toxicity studies in rats have shown the kidney to be the major target organ of olsalazine toxicity. At an oral daily dose of 400 mg/kg or higher, olsalazine treatment produced nephritis and tubular necrosis in a 4-week study; interstitial nephritis and tubular calcinosis in a 6-month study, and renal fibrosis, mineralization, and transitional cell hyperplasia in a 1-year study.

Two controlled studies have demonstrated the efficacy of olsalazine as maintenance therapy in patients with ulcerative colitis. In the first, ulcerative colitis patients in remission were randomized to olsalazine 500 mg B.I.D. or placebo, and relapse rates for a six month period of time were compared. For the 52 patients randomized to olsalazine, 12 relapses occurred, while for the 49 placebo patients, 22 relapses occurred. This difference in relapse rates was significant (p<0.02).

Olsalazine is indicated for the maintenance of remission of ulcerative colitis in patients who are intolerant of sulfasalazine.

Hypersensitivity to olsalazine, other salicylates, or any of the excipients.

Overall, approximately 17% of subjects receiving olsalazine in clinical studies reported diarrhea sometime during therapy. This diarrhea resulted in withdrawal of treatment in 6% of patients. This diarrhea appears to be dose related, although it may be difficult to distinguish from the underlying symptoms of the disease.

Exacerbation of the symptoms of colitis thought to have been caused by mesalamine or sulfasalazine has been noted.

The co-administration of salicylates and low molecular weight heparins or heparinoids may result in an increased risk of bleeding (i.e., hematomas) following neuraxial anesthesia. Salicylates should be discontinued prior to the initiation of a low molecular weight heparin or heparinoid. If this is not possible, it is recommended to monitor patients closely for bleeding.

It is recommended not to give salicylates for six weeks after the varicella vaccine to avoid a possible increased risk of developing Reye's syndrome.

In a two year oral rat carcinogenicity study, olsalazine was tested in male and female Wistar rats at daily doses of 200, 400, and 800 mg/kg/day (approximately 10 to 40 times the human maintenance dose, based on a patient weight of 50 kg and a human dose of 1 g). Urinary bladder transitional cell carcinomas were found in three male rats (6%, p=0.022, exact trend test) receiving 40 times the human dose and were not found in untreated male controls. In the same study, urinary bladder transitional cell carcinoma and papilloma occurred in 2 untreated control female rats (2%). No such tumors were found in any of the female rats treated at doses up to 40 times the human dose.

In an eighteen month oral mouse carcinogenicity study, olsalazine was tested in male and female CD-1 mice at daily doses of 500, 1000, and 2000 mg/kg/day (approximately 25 to 100 times the human maintenance dose). Liver hemangiosarcomata were found in two male mice (4%) receiving olsalazine at 100 times the human dose, while no such tumor occurred in the other treated male mice groups or any of the treated female mice. The observed incidence of this tumor is within the 4% incidence in historical controls.

Olsalazine in a dose range of 100 to 400 mg/kg/day (approximately 5 to 20 times the human maintenance dose) did not influence the fertility of male or female rats. The oligospermia and infertility in men associated with sulfasalazine have not been reported with olsalazine.

Olsalazine has been shown to produce fetal developmental toxicity as indicated by reduced fetal weights, retarded ossifications, and immaturity of the fetal visceral organs when given during organogenesis to pregnant rats in doses 5 to 20 times the human dose (100 to 400 mg/kg).

There are no adequate and well-controlled studies in pregnant women. Olsalazine should be used during pregnancy only if the potential benefit justifies the potential risk to the fetus.

Small amounts of the active metabolite of olsalazine (5-ASA) may pass into breast milk. Harmful infant effects (diarrhea) have been reported when 5-ASA was used during breastfeeding. Unless the benefit of the treatment outweighs the risks, olsalazine should not be taken by breast-feeding women, or patients should be advised to discontinue breastfeeding if using olsalazine.

Oral administration of olsalazine to lactating rats in doses 5 to 20 times the human dose produced growth retardation in their pups.

Safety and effectiveness in a pediatric population have not been established.

Clinical studies of DIPENTUM did not include sufficient numbers of subjects aged 65 and over to determine whether they respond differently from younger subjects. Other reported clinical experience has not identified differences in responses between the elderly and younger patients. In general, elderly patients should be treated with caution due to the greater frequency of decreased hepatic, renal, or cardiac function, co-existence of other disease, as well as concomitant drug therapy.

Patients with severe allergies or asthma should be monitored for signs of worsening symptoms.

Patients with impaired renal function should be monitored.

Although renal abnormalities were not reported in clinical trials with olsalazine, there have been rare reports from post-marketing experience (see ). Therefore, the possibility of renal tubular damage due to absorbed mesalamine or its n-acetylated metabolite, as noted in the section must be kept in mind, particularly for patients with pre-existing renal disease. In these patients, monitoring with urinalysis, BUN, and creatinine determinations is advised. ADVERSE REACTIONS, PostmarketingANIMAL TOXICOLOGY

Olsalazine has been evaluated in ulcerative colitis patients in remission, as well as those with acute disease. Both sulfasalazine-tolerant and intolerant patients have been studied in controlled clinical trials. Overall, 10.4% of patients discontinued olsalazine because of an adverse experience compared with 6.7% of placebo patients. The most commonly reported adverse reactions leading to treatment withdrawal were diarrhea or loose stools (olsalazine 5.9%; placebo 4.8%), abdominal pain, and rash or itching (slightly more than 1% of patients receiving olsalazine). Other adverse reactions to olsalazine leading to withdrawal occurred in fewer than 1% of patients ( ). Table 1

For those controlled studies, the comparative incidences of adverse reactions reported in 1% or more patients treated with olsalazine or placebo are provided in Table 2.

Over 2,500 patients have been treated with olsalazine in various controlled and uncontrolled clinical studies. In these as well as in post-marketing experience, olsalazine was administered mainly to patients intolerant to sulfasalazine. There have been rare reports of the following adverse effects in patients receiving olsalazine. These were often difficult to distinguish from possible symptoms of the underlying disease or from the effects of prior and/or concomitant therapy. A causal relationship to the drug has not been demonstrated for some of these reactions.

A patient who developed thyroid disease 9 days after starting DIPENTUM was given propranolol and radioactive iodine and subsequently developed shortness of breath and nausea. The patient died 5 days later with signs and symptoms of acute diffuse myocarditis.

In a double-blind, placebo-controlled study, increased frequency and severity of diarrhea were reported in patients randomized to olsalazine 500 mg B.I.D. with concomitant pelvic radiation.

Rare cases of granulomatous hepatitis and nonspecific, reactive hepatitis have been reported in patients receiving olsalazine. Additionally, a patient developed mild cholestatic hepatitis during treatment with sulfasalazine and experienced the same symptoms two weeks later after the treatment was changed to olsalazine. Withdrawal of olsalazine led to complete recovery in these cases.

The following events have been identified during post-approval use of products that contain (or are metabolized to) mesalamine in clinical practice. Because they are reported voluntarily from a population of unknown size, estimates of frequency cannot be made. These events have been chosen for inclusion due to a combination of seriousness, frequency of reporting, or potential causal connection to mesalamine:

Drug dependence has not been reported with chronic administration of olsalazine.

No overdosage has been reported in humans. The knowledge of overdosage is limited. Possible overdose symptoms include nausea, vomiting and diarrhea. It is recommended to check hematology, acid-base, electrolyte, liver and kidney status, and to provide supportive treatment. There is no specific antidote to DIPENTUM.

Maximum single oral doses of 5 g/kg in mice and rats and 2 g/kg in dogs were not lethal. Symptoms of acute toxicity were decreased motor activity and diarrhea in all species tested. In addition, vomiting was reported in dogs.

The usual dosage in adults for maintenance of remission is 1.0 g/day in two divided doses.

DIPENTUM is a registered trademark 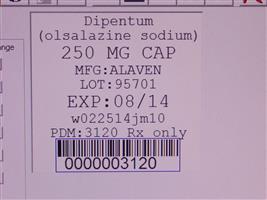