Esmolol hydrochloride has the empirical formula C16H26NO4Cl and a molecular weight of 331.8. It has one asymmetric center and exists as an enantiomeric pair. Esmolol hydrochloride is a white to off-white crystalline powder. It is a relatively hydrophilic compound which is very soluble in water and freely soluble in alcohol. Its partition coefficient (octanol/water) at pH 7.0 is 0.42 compared to 17.0 for propranolol. Esmolol Hydrochloride Injection Esmolol Hydrochloride Injection is a clear, colorless to light yellow, sterile, nonpyrogenic, iso-osmotic solution of esmolol

Esmolol hydrochloride is a beta1-selective (cardioselective) adrenergic receptor blocking agent with rapid onset, a very short duration of action, and no significant intrinsic sympathomimetic or membrane stabilizing activity at therapeutic dosages. Its elimination halflife after intravenous infusion is approximately 9 minutes. Esmolol hydrochloride inhibits the beta1 receptors located chiefly in cardiac muscle, but this preferential effect is not absolute and at higher doses it begins to inhibit beta2 receptors located chiefly in the bronchial and vascular musculature.

Intraoperative and Postoperative Tachycardia and/or Hypertension
Esmolol hydrochloride is indicated for the treatment of tachycardia and hypertension that occur during induction and tracheal intubation, during surgery, on emergence from anesthesia, and in the postoperative period, when in the physician’s judgment such specific intervention is considered indicated. Use of esmolol hydrochloride to prevent such events is not recommended.

Hypotension
In clinical trials 20-50% of patients treated with esmolol hydrochloride have experienced hypotension, generally defined as systolic pressure less than 90 mmHg and/or diastolic pressure less than 50 mmHg. About 12% of the patients have been symptomatic (mainly diaphoresis or dizziness). Hypotension can occur at any dose but is dose-related so that doses beyond 200 mcg/kg/min (0.2 mg/kg/ min) are not recommended. Patients should be closely monitored, especially if pretreatment blood pressure is low. Decrease of dose or termination of infusion reverses hypotension, usually within 30 minutes.

Cardiac Failure
Sympathetic stimulation is necessary in supporting circulatory function in congestive heart failure, and beta blockade carries the potential hazard of further depressing myocardial contractility and precipitating more severe failure. Continued depression of the myocardium with beta blocking agents over a period of time can, in some cases, lead to cardiac failure. At the first sign or symptom of impending cardiac failure, esmolol hydrochloride should be withdrawn. Although withdrawal may be sufficient because of the short elimination half-life of esmolol hydrochloride, specific treatment may also be considered (seeOVERDOSAGE). The use of esmolol hydrochloride for control of ventricular response in patients with supraventricular arrhythmias should be undertaken with caution when the patient is compromised hemodynamically or is taking other drugs that decrease any or all of the following: peripheral resistance, myocardial filling, myocardial contractility, or electrical impulse propagation in the myocardium. Despite the rapid onset and offset of the effects of esmolol hydrochloride, several cases of death have been reported in complex clinical states where esmolol hydrochloride was presumably being used to control ventricular rate.

Intraoperative and Postoperative Tachycardia and/or Hypertension
Esmolol hydrochloride should not be used as the treatment for hypertension in patients in whom the increased blood pressure is primarily due to the vasoconstriction associated with hypothermia.
Bronchospastic Diseases
PATIENTS WITH BRONCHOSPASTIC DISEASES SHOULD, IN GENERAL, NOT RECEIVE BETA BLOCKERS. Because of its relative beta1 selectivity and titratability, esmolol hydrochloride may be used with caution in patients with bronchospastic diseases. However, since beta1 selectivity is not absolute, esmolol hydrochloride should be carefully titrated to obtain the lowest
possible effective dose. In the event of bronchospasm, the infusion should be terminated immediately; a beta2 stimulating agent may be administered if conditions warrant but should be used with particular caution as patients already have rapid ventricular rates.

Diabetes Mellitus and Hypoglycemia
Esmolol hydrochloride should be used with caution in diabetic patients requiring a beta blocking agent. Beta blockers may mask tachycardia occurring with hypoglycemia, but other manifestations such as dizziness and sweating may not be significantly affected.

General
Infusion concentrations of 20 mg/mL were associated with more serious venous irritation, including thrombophlebitis, than concentrations of 10 mg/mL. Extravasation of 20 mg/mL may lead to a serious local reaction and possible skin necrosis. Concentrations greater than 10 mg/mL or infusion into small veins or through a butterfly catheter should be avoided. Because the acid metabolite of esmolol hydrochloride is primarily excreted unchanged by the kidney, esmolol hydrochloride should be administered with caution to patients with impaired renal function. The elimination half-life of the acid metabolite was prolonged tenfold and the plasma level was considerably elevated in patients with end-stage renal disease. Care should be taken in the intravenous administration of esmolol hydrochloride as sloughing of the skin and necrosis have been reported in association with infiltration and extravasation of intravenous infusions.

Carcinogenesis, Mutagenesis, Impairment of Fertility
Because of its short term usage no carcinogenicity, mutagenicity or reproductive performance studies have been conducted with esmolol hydrochloride.

Pediatric Use
The safety and effectiveness of esmolol hydrochloride in pediatric patients have not been established.

The following adverse reaction rates are based on use of esmolol hydrochloride in clinical trials involving 369 patients with supraventricular tachycardia and over 600 intraoperative and postoperative patients enrolled in clinical trials. Most adverse effects observed in controlled clinical trial settings have been mild and transient. The most important adverse effect has been hypotension (see WARNINGS). Deaths have been reported in post-marketing experience occurring during complex clinical states where esmolol hydrochloride was presumably being used simply to control ventricular rate (see WARNINGS, Cardiac Failure).

Cardiovascular
Symptomatic hypotension (diaphoresis, dizziness) occurred in 12% of patients, and therapy was discontinued in about 11%, about half of whom were symptomatic. Asymptomatic hypotension occurred in about 25% of patients. Hypotension resolved during esmolol hydrochloride infusion in 63% of these patients and within 30 minutes after discontinuation of infusion in 80% of the remaining patients. Diaphoresis accompanied hypotension in 10% of patients. Peripheral ischemia occurred in approximately 1% of patients. Pallor, flushing, bradycardia (heart rate less than 50 beats per minute), chest pain, syncope, pulmonary edema and heart block have each been reported in less than 1% of patients. In two patients without supraventricular tachycardia but with serious coronary artery disease (post inferior myocardial infarction or unstable angina), severe bradycardia/sinus pause/asystole has developed, reversible in both cases with discontinuation of treatment.

Respiratory
Bronchospasm, wheezing, dyspnea, nasal congestion, rhonchi, and rales have each been reported in less than 1% of patients.

Skin (Infusion Site)
Infusion site reactions including inflammation and induration were reported in about 8% of patients. Edema, erythema, skin discoloration, burning at the infusion site, thrombophlebitis, and local skin necrosis from extravasation have each occurred in less than
1% of patients.

Miscellaneous
Each of the following has been reported in less than 1% of patients: Urinary retention, speech disorder, abnormal vision, midscapular pain, rigors, and fever.

*As the desired heart rate or endpoint is approached, the loading infusion may be omitted and the maintenance infusion titrated to 300 mcg/kg/min (0.3 mg/kg/min) or downward as appropriate. Maintenance dosages above 200 mcg/kg/min (0.2 mg/kg/min) have not been shown to have significantly increased benefits. The interval between titration steps may be increased. In the treatment of supraventricular tachycardia, responses to esmolol hydrochloride usually (over 95%) occur within the range of 50 to 200 micrograms/kg/min (0.05 to 0.2 milligrams/kg/min). The average effective dosage is approximately 100 micrograms/kg/ min (0.1 milligrams/kg/min) although dosages as low as 25 micrograms/kg/min (0.025 milligrams/kg/min) have been adequate in some patients. Dosages as high as 300 micrograms/kg/min (0.3 milligrams/kg/min) have been used, but these provide little added effect and increase the rate of adverse effects, so doses greater than 200 micrograms/kg/min are not recommended. Dosage of esmolol hydrochloride in supraventricular tachycardia must be individualized by titration in which each step consists of a loading dosage followed by a maintenance dosage.
This specific dosage regimen has not been studied intraoperatively and, because of the time required for titration, may not be optimal for intraoperative use.
The safety of dosages above 300 mcg/kg/min (0.3 mg/kg/min) has not been studied.
In the event of an adverse reaction, the dosage of esmolol hydrochloride may be reduced or discontinued. If a local infusion site reaction develops, an alternate infusion site should be used and caution should be taken to prevent extravasation. The use of butterfly needles should be avoided.
Abrupt cessation of esmolol hydrochloride in patients has not been reported to produce the withdrawal effects which may occur with abrupt withdrawal of beta blockers following chronic use in coronary artery disease (CAD) patients. However, caution should still be used in abruptly discontinuing infusions of esmolol hydrochloride in CAD patients.
After achieving an adequate control of the heart rate and a stable clinical status in patients with supraventricular tachycardia, transition to alternative antiarrhythmic agents such as propranolol, digoxin, or verapamil, may be accomplished.
A recommended guideline for such a transition is given below but the physician should carefully consider the labeling instructions for the alternative agent selected.

INTRAOPERATIVE AND POSTOPERATIVE TACHYCARDIA AND/OR HYPERTENSION
In the intraoperative and postoperative settings it is not always advisable to slowly titrate the dose of esmolol hydrochloride to a therapeutic effect. Therefore, two dosing options are presented: immediate control dosing and a gradual control when the physician has time to titrate.
1. Immediate Control
For intraoperative treatment of tachycardia and/or hypertension give an 80 mg (approximately 1 mg/kg) bolus dose over 30 seconds followed by a 150 mcg/kg/min infusion, if necessary. Adjust the infusion rate as required up to 300 mcg/kg/min to maintain desired heart rate and/or blood pressure.
2. Gradual Control
For postoperative tachycardia and hypertension, the dosing schedule is the same as that used in supraventricular tachycardia. To initiate treatment, administer a loading dosage infusion of 500 mcg/kg/min of esmolol hydrochloride for one minute followed by a four-minute maintenance infusion of 50 mcg/kg/min. If an adequate therapeutic effect is not observed within five minutes, repeat the same loading dosage and follow with a maintenance infusion increased to 100 mcg/kg/min (see above SUPRAVENTRICULAR TACHYCARDIA).
Notes:
1. Higher dosages (250-300 mcg/kg/min) may be required for adequate control of blood pressure than those required for the treatment of atrial fibrillation, flutter and sinus tachycardia. One third of the postoperative hypertensive patients required these higher doses.
2. Parenteral drug products should be inspected visually for particulate matter and discoloration prior to administration, whenever solution and container permit. 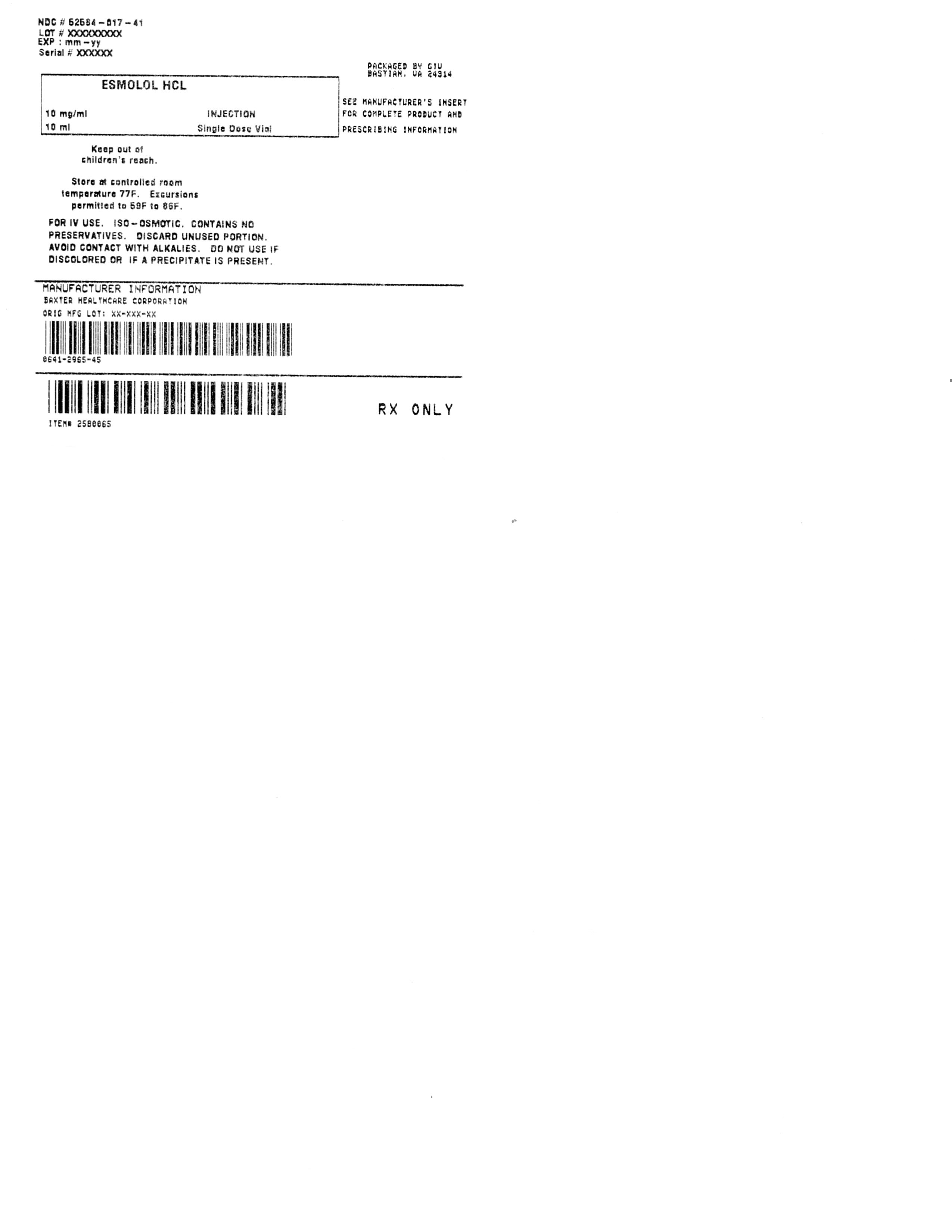