Neosporin Ophthalmic Solution (neomycin and polymyxin B sulfates and gramicidin ophthalmic solution) is a sterile antimicrobial solution for ophthalmic use. Each mL contains: neomycin sulfate equivalent to 1.75 mg neomycin base, polymyxin B sulfate equivalent to 10,000 polymyxin B units, and gramicidin 0.025 mg. The vehicle contains alcohol 0.5%, thimerosal 0.001% (added as a preservative), and the inactive ingredients propylene glycol, polyoxyethylene polyoxypropylene compound, sodium chloride, and Water for Injection.

Neomycin sulfate is the sulfate salt of neomycin B and C, which are produced by the growth of Streptomyces fradiae Waksman (Fam. Streptomycetaceae). It has a potency equivalent of not less than 600 µg of neomycin standard per mg, calculated on an anhydrous basis. The structural formulae are: 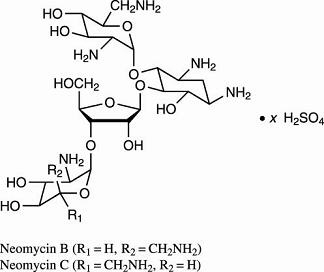 Polymyxin B sulfate is the sulfate salt of polymyxin B1 and B2 which are produced by the growth of Bacillus polymyxa (Prazmowski) Migula (Fam. Bacillaceae). It has a potency of not less than 6,000 polymyxin B units per mg, calculated on an anhydrous basis. The structural formulae are:

Gramicidin (also called Gramicidin D) is a mixture of three pairs of antibacterial substances (Gramicidin A, B, and C) produced by the growth of Bacillus brevis Dubos (Fam. Bacillaceae). It has a potency of not less than 900 µg of standard gramicidin per mg. The structural formulae are:

A wide range of antibacterial action is provided by the overlapping spectra of neomycin, polymyxin B sulfate, and gramicidin.

Neomycin is bactericidal for many gram-positive and gram-negative organisms. It is an aminoglycoside antibiotic which inhibits protein synthesis by binding with ribosomal RNA and causing misreading of the bacterial genetic code.

Polymyxin B is bactericidal for a variety of gram-negative organisms. It increases the permeability of the bacterial cell membrane by interacting with the phospholipid components of the membrane.

Gramicidin is bactericidal for a variety of gram-positive organisms. It increases the permeability of the bacterial cell membrane to inorganic cations by forming a network of channels through the normal lipid bilayer of the membrane.

NEOSPORIN Ophthalmic Solution is indicated for the topical treatment of superficial infections of the external eye and its adnexa caused by susceptible bacteria. Such infections encompass conjunctivitis, keratitis and keratoconjunctivitis, blepharitis and blepharoconjunctivitis.

NEOSPORIN Ophthalmic Solution is contraindicated in individuals who have shown hypersensitivity to any of its components.

NOT FOR INJECTION INTO THE EYE. NEOSPORIN Ophthalmic Solution should never be directly introduced into the anterior chamber of the eye or injected subconjunctivally.

Topical antibiotics, particularly neomycin sulfate, may cause cutaneous sensitization. A precise incidence of hypersensitivity reactions (primarily skin rash) due to topical antibiotics is not known. The manifestations of sensitization to topical antibiotics are usually itching, reddening, and edema of the conjunctiva and eyelid. A sensitization reaction may manifest simply as a failure to heal. During long-term use of topical antibiotic products, periodic examination for such signs is advisable, and the patient should be told to discontinue the product if they are observed. Symptoms usually subside quickly on withdrawing the medication. Application of products containing these ingredients should be avoided for the patient thereafter (see PRECAUTIONS:General).

As with other antibiotic preparations, prolonged use of NEOSPORIN Ophthalmic Solution may result in overgrowth of nonsusceptible organisms including fungi. If superinfection occurs, appropriate measures should be initiated.

Bacterial resistance to NEOSPORIN Ophthalmic Solution may also develop. If purulent discharge, inflammation, or pain becomes aggravated, the patient should discontinue use of the medication and consult a physician.

There have been reports of bacterial keratitis associated with the use of topical ophthalmic products in multiple-dose containers which have been inadvertently contaminated by patients, most of whom had a concurrent corneal disease or a disruption of the ocular epithelial surface (see PRECAUTIONS:Information for Patients).

Allergic cross-reactions may occur which could prevent the use of any or all of the following antibiotics for the treatment of future infections: kanamycin, paromomycin, streptomycin, and possibly gentamicin.

Patients should be instructed to avoid allowing the tip of the dispensing container to contact the eye, eyelid, fingers, or any other surface. The use of this product by more than one person may spread infection.

Patients should also be instructed that ocular products, if handled improperly, can become contaminated by common bacteria known to cause ocular infections. Serious damage to the eye and subsequent loss of vision may result from using contaminated products (see PRECAUTIONS:General).

If the condition persists or gets worse, or if a rash or other allergic reaction develops, the patient should be advised to stop use and consult a physician. Do not use this product if you are allergic to any of the listed ingredients.

Keep tightly closed when not in use. Keep out of reach of children.

Long-term studies in animals to evaluate carcinogenic or mutagenic potential have not been conducted with polymyxin B sulfate or gramicidin. Treatment of cultured human lymphocytes in vitro with neomycin increased the frequency of chromosome aberrations at the highest concentration (80 µg/mL) tested. However, the effects of neomycin on carcinogenesis and mutagenesis in humans are unknown.

Animal reproduction studies have not been conducted with neomycin sulfate, polymyxin B sulfate, or gramicidin. It is also not known whether NEOSPORIN Ophthalmic Solution can cause fetal harm when administered to a pregnant woman or can affect reproduction capacity. NEOSPORIN Ophthalmic Solution should be given to a pregnant woman only if clearly needed.

Clinical studies of NEOSPORIN® Ophthalmic Solution did not include sufficient numbers of subjects aged 65 and over to determine whether they respond differently from younger subjects. Other reported clinical experience has not identified differences in responses between the elderly and younger patients.

Adverse reactions have occurred with the anti-infective components of NEOSPORIN Ophthalmic Solution. The exact incidence is not known. Reactions occurring most often are allergic sensitization reactions including itching, swelling, and conjunctival erythema (see WARNINGS). More serious hypersensitivity reactions, including anaphylaxis, have been reported rarely.

Local irritation on instillation has also been reported.

Instill one or two drops into the affected eye every 4 hours for 7 to 10 days. In severe infections, dosage may be increased to as much as two drops every hour.

Prescribing Information as of July 2004. 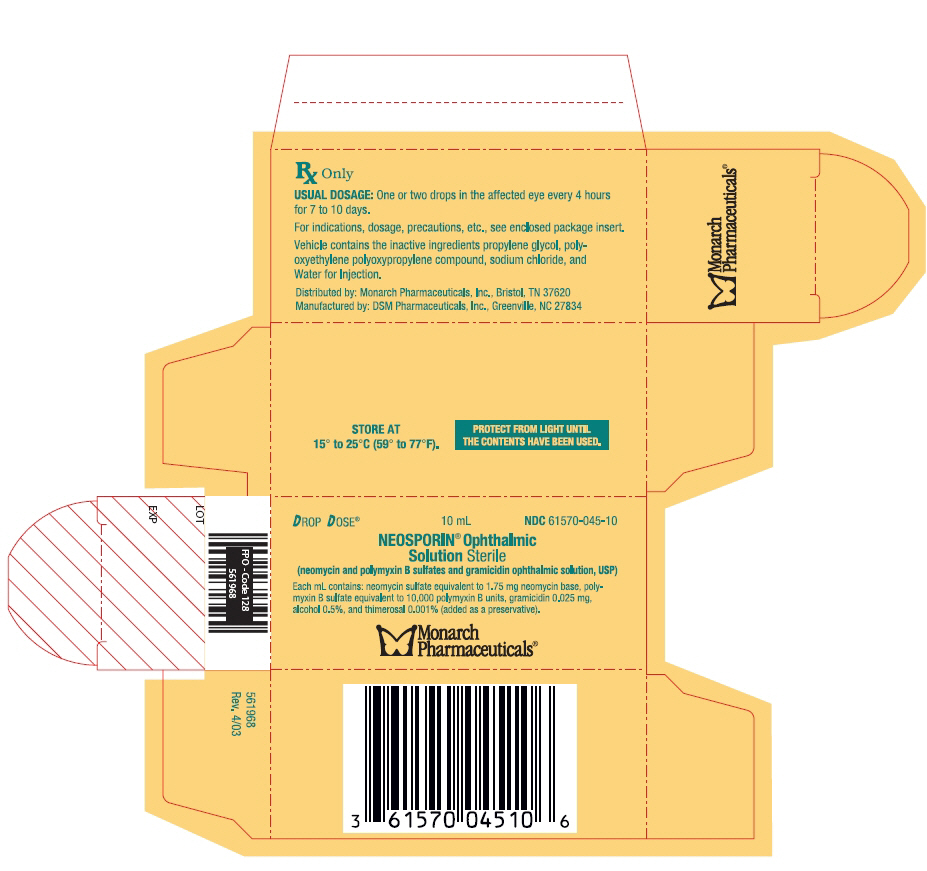