Liquid E-Z-PAQUE is indicated for use in single contrast radiographic examinations of the esophagus, stomach, and small bowel to visualize the gastrointestinal (GI) tract in adult and pediatric patients.

Liquid E-Z-PAQUE is contraindicated in patients with the following conditions:

The use of Liquid E-Z-PAQUE is contraindicated in patients at high risk of perforation of the GI tract [see Contraindications (4)]. Administration of Liquid E-Z-PAQUE may result in leakage of barium from the GI tract in the presence of conditions such as carcinomas, GI fistula, inflammatory bowel disease, gastric or duodenal ulcer, appendicitis, diverticulitis, and in patients with a severe stenosis at any level of the GI tract, especially distal to the stomach. Barium leakage has been associated with peritonitis and granuloma formation.

Orally administered barium sulfate may accumulate proximal to a constricting lesion of the colon, causing obstruction or impaction with development of baroliths (inspissated barium associated with feces) and may cause abdominal pain, appendicitis, bowel obstruction, or rarely perforation. Patients with the following conditions are at higher risk for developing obstruction or baroliths: severe stenosis at any level of the GI tract, impaired GI motility, electrolyte imbalance, dehydration, on a low residue diet, on medications that delay GI motility, constipation, cystic fibrosis or Hirschsprung disease, and the elderly [see Use in Specific Populations (8.4, 8.5)]. To reduce the risk of delayed GI transit and obstruction, patients should maintain adequate hydration following a barium sulfate procedure.

Barium sulfate products may occasionally intravasate into the venous drainage of the large bowel and enter the circulation as a "barium embolus" leading to potentially fatal complications which include systemic and pulmonary embolism, disseminated intravascular coagulation, septicemia and prolonged severe hypotension. Although this complication is exceedingly uncommon after oral administration of barium sulfate suspension, monitor patients for potential intravasation when administering barium sulfate.

Liquid E-Z-PAQUE contains sorbitol which may cause severe symptoms if ingested by patients with hereditary fructose intolerance. Severe symptoms may include the following: vomiting, hypoglycemia, jaundice, hemorrhage, hepatomegaly, hyperuricemia, and kidney failure. Before administration of Liquid E-Z-PAQUE assess patients for a history of hereditary fructose intolerance and avoid use in these patients.

The following adverse reactions have been identified from spontaneous reporting or clinical studies of barium sulfate administered orally. Because the reactions are reported voluntarily from a population of uncertain size, it is not always possible to reliably estimate their frequency or to establish a causal relationship to drug exposure:

8   USE IN SPECIFIC POPULATIONS

Risk Summary
Liquid E-Z-PAQUE is not absorbed systemically following oral administration, and maternal use is not expected to result in fetal exposure to the drug [see Clinical Pharmacology (12.3)].

Risk Summary
Liquid E-Z-PAQUE is not absorbed systemically by the mother following oral administration, and breastfeeding is not expected to result in exposure of the infant to Liquid E-Z-PAQUE [see Clinical Pharmacology (12.3).

The efficacy of Liquid E-Z-PAQUE in pediatric patients from birth to less than 17 years of age is based on successful opacification of the esophagus, stomach, and small bowel during single contrast radiographic procedures [see Clinical Pharmacology (12.1)]. Safety and dosing recommendations in pediatric patients are based on clinical experience [see Dosage and Administration (2.1)].

Clinical studies of Liquid E-Z-PAQUE do not include sufficient numbers of subjects aged 65 and over to determine whether they respond differently from younger subjects. Other reported clinical experience has not identified differences in responses between the elderly and younger patients. In general, dose selection for an elderly patient should be cautious, usually starting at the low end of the dosing range, reflecting the greater frequency of decreased hepatic, renal, or cardiac function, and of concomitant disease or other drug therapy.

Liquid E-Z-PAQUE (barium sulfate) is a radiographic contrast agent supplied as a white to lightly colored barium sulfate suspension (60%w/v) for oral administration. The active ingredient barium sulfate is designated chemically as BaSO4 with a molecular weight of 233.4 g/mol, a density of 4.5 g/cm3, and the following chemical structure:

Due to its high atomic number, barium (the active ingredient in Liquid E-Z-PAQUE) is opaque to x-rays and therefore acts as a positive contrast agent for radiographic studies.

Under physiological conditions, barium sulfate passes through the gastrointestinal tract in an unchanged form and is absorbed only in pharmacologically insignificant amounts.

No animal studies have been performed to evaluate the carcinogenic potential of barium sulfate or potential effects on fertility.

16   HOW SUPPLIED/STORAGE AND HANDLING

How Supplied
Liquid E-Z-PAQUE (barium sulfate) is a suspension (60% w/v) supplied as a unit dose in a single use HDPE plastic bottle containing 213 grams of barium sulfate in 355 mL.

Storage and Handling
Store at USP controlled room temperature 20 to 25°C (68 to 77° F). Protect from freezing.

After administration advise patients to: 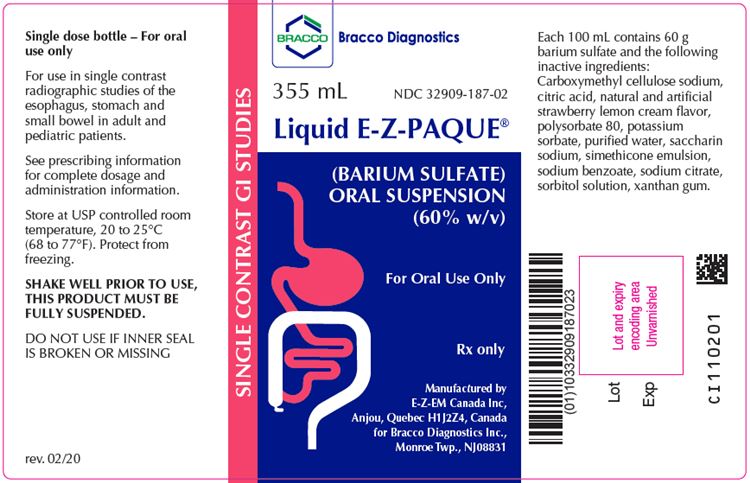 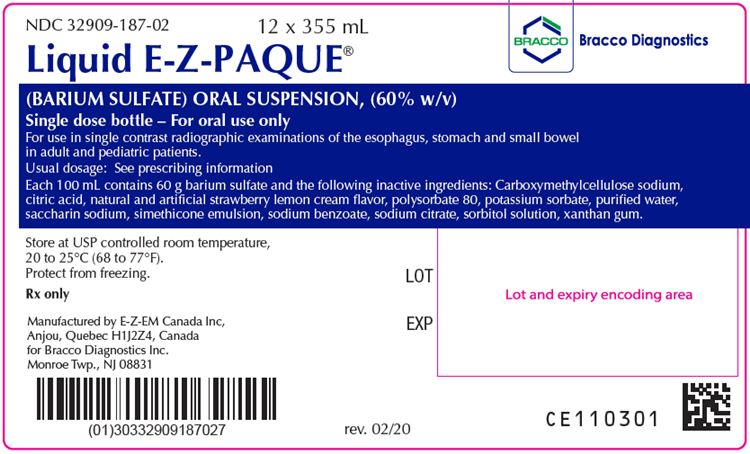