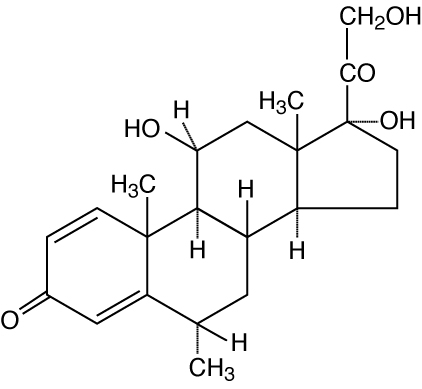 Naturally occurring glucocorticoids (hydrocortisone and cortisone), which also have salt-retaining properties, are used as replacement therapy in adrenocortical deficiency states. Their synthetic analogs are primarily used for their potent anti-inflammatory effects in disorders of many organ systems.

Glucocorticoids cause profound and varied metabolic effects. In addition, they modify the body's immune responses to diverse stimuli.

MethylPREDNISolone Tablets are indicated in the following conditions:

In patients on corticosteroid therapy subjected to unusual stress, increased dosage of rapidly acting corticosteroids before, during, and after the stressful situation is indicated.

Corticosteroids may mask some signs of infection, and new infections may appear during their use. Infections with any pathogen including viral, bacterial, fungal, protozoan or helminthic infections, in any location of the body, may be associated with the use of corticosteroids alone or in combination with other immunosuppressive agents that affect cellular immunity, humoral immunity, or neutrophil function.1

These infections may be mild, but can be severe and at times fatal. With increasing doses of corticosteroids, the rate of occurrence of infectious complications increases.2 There may be decreased resistance and inability to localize infection when corticosteroids are used.

Prolonged use of corticosteroids may produce posterior subcapsular cataracts, glaucoma with possible damage to the optic nerves, and may enhance the establishment of secondary ocular infections due to fungi or viruses.

Since adequate human reproduction studies have not been done with corticosteroids, the use of these drugs in pregnancy, nursing mothers, or women of child-bearing potential requires that the possible benefits of the drug be weighed against the potential hazards to the mother and embryo or fetus. Infants born of mothers who have received substantial doses of corticosteroids during pregnancy, should be carefully observed for signs of hypoadrenalism.

Average and large doses of hydrocortisone or cortisone can cause elevation of blood pressure, salt and water retention, and increased excretion of potassium. These effects are less likely to occur with the synthetic derivatives except when used in large doses. Dietary salt restriction and potassium supplementation may be necessary. All corticosteroids increase calcium excretion.

The use of MethylPREDNISolone Tablets in active tuberculosis should be restricted to those cases of fulminating or disseminated tuberculosis in which the corticosteroid is used for the management of the disease in conjunction with an appropriate antituberculous regimen.

If corticosteroids are indicated in patients with latent tuberculosis or tuberculin reactivity, close observation is necessary as reactivation of the disease may occur. During prolonged corticosteroid therapy, these patients should receive chemoprophylaxis.

Persons who are on drugs which suppress the immune system are more susceptible to infections than healthy individuals. Chicken pox and measles, for example, can have a more serious or even fatal course in non-immune children or adults on corticosteroids. In such children or adults who have not had these diseases particular care should be taken to avoid exposure. How the dose, route and duration of corticosteroid administration affects the risk of developing a disseminated infection is not known. The contribution of the underlying disease and/or prior corticosteroid treatment to the risk is also not known. If exposed, to chicken pox, prophylaxis with varicella zoster immune globulin (VZIG) may be indicated. If exposed to measles, prophylaxis with pooled intramuscular immunoglobulin (IG) may be indicated. (See the respective package inserts for complete VZIG and IG prescribing information.) If chicken pox develops, treatment with antiviral agents may be considered. Similarly, corticosteroids should be used with great care in patients with known or suspected Strongyloides (threadworm) infestation. In such patients, corticosteroid-induced immunosuppression may lead to Strongyloides hyperinfection and dissemination with widespread larval migration, often accompanied by severe enterocolitis and potentially fatal gram-negative septicemia.

Drug-induced secondary adrenocortical insufficiency may be minimized by gradual reduction of dosage. This type of relative insufficiency may persist for months after discontinuation of therapy; therefore, in any situation of stress occurring during that period, hormone therapy should be reinstituted. Since mineralocorticoid secretion may be impaired, salt and/or a mineralocorticoid should be administered concurrently.

There is an enhanced effect of corticosteroids on patients with hypothyroidism and in those with cirrhosis.

Corticosteroids should be used cautiously in patients with ocular herpes simplex because of possible corneal perforation.

The lowest possible dose of corticosteroid should be used to control the condition under treatment, and when reduction in dosage is possible, the reduction should be gradual.

Steroids should be used with caution in nonspecific ulcerative colitis, if there is a probability of impending perforation, abscess or other pyogenic infection; diverticulitis; fresh intestinal anastomoses; active or latent peptic ulcer; renal insufficiency; hypertension; osteoporosis; and myasthenia gravis.

Growth and development of infants and children on prolonged corticosteroid therapy should be carefully observed.

Kaposi's sarcoma has been reported to occur in patients receiving corticosteroid therapy. Discontinuation of corticosteroids may result in clinical remission.

Although controlled clinical trials have shown corticosteroids to be effective in speeding the resolution of acute exacerbations of multiple sclerosis, they do not show that corticosteroids affect the ultimate outcome or natural history of the disease. The studies do show that relatively high doses of corticosteroids are necessary to demonstrate a significant effect (see DOSAGE AND ADMINISTRATION).

The effect of methylprednisolone on oral anticoagulants is variable. There are reports of enhanced as well as diminished effects of anticoagulant when given concurrently with corticosteroids. Therefore, coagulation indices should be monitored to maintain the desired anticoagulant effect.

Persons who are on immunosuppressant doses of corticosteroids should be warned to avoid exposure to chickenpox or measles. Patients should also be advised that if they are exposed, medical advice should be sought without delay.

Increases in alanine transaminase (ALT, SGPT), aspartate transaminase (AST, SGOT), and alkaline phosphatase have been observed following corticosteroid treatment. These changes are usually small, not associated with any clinical syndrome and are reversible upon discontinuation.

May suppress reactions to skin tests

Secondary adrenocortical and pituitary unresponsiveness, particularly in times of stress, as in trauma, surgery or illness

Increased requirements of insulin or oral hypoglycemic agents in diabetics

Suppression of growth in children

The following additional reactions have been reported following oral as well as parenteral therapy:

Urticaria and other allergic, anaphylactic or hypersensitivity reactions.

The initial dosage of MethylPREDNISolone Tablets may vary from 4 mg to 48 mg of methylprednisolone per day depending on the specific disease entity being treated. In situations of less severity lower doses will generally suffice while in selected patients higher initial doses may be required. The initial dosage should be maintained or adjusted until a satisfactory response is noted. If after a reasonable period of time there is a lack of satisfactory clinical response, MethylPREDNISolone should be discontinued and the patient transferred to other appropriate therapy.

IT SHOULD BE EMPHASIZED THAT DOSAGE REQUIREMENTS ARE VARIABLE AND MUST BE INDIVIDUALIZED ON THE BASIS OF THE DISEASE UNDER TREATMENT AND THE RESPONSE OF THE PATIENT. After a favorable response is noted, the proper maintenance dosage should be determined by decreasing the initial drug dosage in small decrements at appropriate time intervals until the lowest dosage which will maintain an adequate clinical response is reached. It should be kept in mind that constant monitoring is needed in regard to drug dosage. Included in the situations which may make dosage adjustments necessary are changes in clinical status secondary to remissions or exacerbations in the disease process, the patient's individual drug responsiveness, and the effect of patient exposure to stressful situations not directly related to the disease entity under treatment; in this latter situation it may be necessary to increase the dosage of MethylPREDNISolone for a period of time consistent with the patient's condition. If after long-term therapy the drug is to be stopped, it is recommended that it be withdrawn gradually rather than abruptly.

Alternate day therapy is a corticosteroid dosing regimen in which twice the usual daily dose of corticoid is administered every other morning. The purpose of this mode of therapy is to provide the patient requiring long-term pharmacologic dose treatment with the beneficial effects of corticoids while minimizing certain undesirable effects, including pituitary-adrenal suppression, the Cushingoid state, corticoid withdrawal symptoms, and growth suppression in children.

The rationale for this treatment schedule is based on two major premises: (a) the anti-inflammatory or therapeutic effect of corticoids persists longer than their physical presence and metabolic effects and (b) administration of the corticosteroid every other morning allows for reestablishment of more nearly normal hypothalamic-pituitary-adrenal (HPA) activity on the off-steroid day.

A brief review of the HPA physiology may be helpful in understanding this rationale. Acting primarily through the hypothalamus a fall in free cortisol stimulates the pituitary gland to produce increasing amounts of corticotropin (ACTH) while a rise in free cortisol inhibits ACTH secretion. Normally the HPA system is characterized by diurnal (circadian) rhythm. Serum levels of ACTH rise from a low point about 10 pm to a peak level about 6 am. Increasing levels of ACTH stimulate adrenal cortical activity resulting in a rise in plasma cortisol with maximal levels occurring between 2 am and 8 am. This rise in cortisol dampens ACTH production and in turn adrenal cortical activity. There is a gradual fall in plasma corticoids during the day with lowest levels occurring about midnight.

The diurnal rhythm of the HPA axis is lost in Cushing's disease, a syndrome of adrenal cortical hyperfunction characterized by obesity with centripetal fat distribution, thinning of the skin with easy bruisability, muscle wasting with weakness, hypertension, latent diabetes, osteoporosis, electrolyte imbalance, etc. The same clinical findings of hyperadrenocorticism may be noted during long-term pharmacologic dose corticoid therapy administered in conventional daily divided doses. It would appear, then, that a disturbance in the diurnal cycle with maintenance of elevated corticoid values during the night may play a significant role in the development of undesirable corticoid effects. Escape from these constantly elevated plasma levels for even short periods of time may be instrumental in protecting against undesirable pharmacologic effects.

During conventional pharmacologic dose corticosteroid therapy, ACTH production is inhibited with subsequent suppression of cortisol production by the adrenal cortex. Recovery time for normal HPA activity is variable depending upon the dose and duration of treatment. During this time the patient is vulnerable to any stressful situation. Although it has been shown that there is considerably less adrenal suppression following a single morning dose of prednisolone (10 mg) as opposed to a quarter of that dose administered every six hours, there is evidence that some suppressive effect on adrenal activity may be carried over into the following day when pharmacologic doses are used. Further, it has been shown that a single dose of certain corticosteroids will produce adrenal cortical suppression for two or more days. Other corticoids, including methylprednisolone, hydrocortisone, prednisone, and prednisolone, are considered to be short acting (producing adrenal cortical suppression for 1¼ to 1½ days following a single dose) and thus are recommended for alternate day therapy.

The following should be kept in mind when considering alternate day therapy:

MethylPREDNISolone Tablets, 4 mg are white, oval, quadrisect tablets debossed "42/16/V" on one side and debossed "4" on the reverse side.

Dispense in a tight light-resistant container as defined in the USP.