EPSOLAY is indicated for the treatment of inflammatory lesions of rosacea in adults.

Cream, 5%. Each gram of EPSOLAY contains 50 mg of benzoyl peroxide in a white to off-white base.

EPSOLAY is contraindicated in patients with a history of hypersensitivity reactions to benzoyl peroxide or any components of the formulation in EPSOLAY [see Warnings and Precautions (5.1)].

Erythema, scaling, dryness and stinging/burning may be experienced with use of EPSOLAY. Irritation and contact dermatitis may occur. Apply a moisturizer and discontinue EPSOLAY if symptoms do not improve. Avoid application of EPSOLAY to cuts, abrasions, eczematous or sunburned skin.

In two randomized, double-blind, vehicle-controlled trials, adult subjects with rosacea applied EPSOLAY (N = 488) or vehicle (N = 234) once daily for 12 weeks. The majority of subjects were Caucasian (93%) and female (73%) with a mean age of 51 years.

In a 40-week open-label extension safety study (for a total of up to 52 weeks of treatment) the frequency and severity of local tolerability signs and symptoms at Week 52 were comparable to those reported at Week 12.

The systemic exposure of benzoyl peroxide is unknown. Based on the published literature, benzoyl peroxide is metabolized to benzoic acid (an endogenous substance), which is eliminated in the urine. Hence, maternal use is not expected to result in fetal exposure to the drug. Animal reproductive studies have not been conducted with EPSOLAY or benzoyl peroxide.

There are no data on the presence of benzoyl peroxide in human milk, its effects on the breastfed infant or its effects on milk production. The systemic exposure of benzoyl peroxide is unknown. Based on the published literature, benzoyl peroxide is metabolized to benzoic acid (an endogenous substance), which is eliminated in the urine. Any amount of benzoyl peroxide excreted into human milk by a nursing mother would be expected to be metabolized by tissue and stomach esterases. Therefore, breastfeeding is not expected to result in exposure of the infant to EPSOLAY. The developmental and health benefits of breastfeeding should be considered along with the mother's clinical need for EPSOLAY and any potential adverse effects on the breastfed child from EPSOLAY or from the underlying maternal condition.

Safety and effectiveness of EPSOLAY for the treatment of inflammatory lesions of rosacea have not been established in pediatric patients.

Of the 733 subjects in the clinical trials of EPSOLAY, 127 (17%) subjects were 65 and over, while 37 (3%) subjects were 75 and over. No overall differences in safety or effectiveness were observed between these subjects and younger subjects.

The chemical name for benzoyl peroxide is benzoyl benzenecarboperoxoate. It has the following structural formula:

The benzoyl peroxide in EPSOLAY is in a solid form that is incorporated into a microcapsule composed of silicon dioxide, cetrimonium chloride and polyquaternium-7.

Benzoyl peroxide is an oxidizing agent with bactericidal and keratolytic effects but the precise mechanism of action in the treatment of rosacea is unknown.

The pharmacodynamics of EPSOLAY in the treatment of rosacea are unknown.

Benzoyl peroxide is absorbed by the skin where it is converted to benzoic acid, an endogenous substance, which is eliminated in the urine. The systemic exposure of benzoyl peroxide following the application of EPSOLAY was not assessed.

Carcinogenicity, mutagenicity, and impairment of fertility studies were not conducted with EPSOLAY.

The role of benzoyl peroxide as a tumor promoter has been well established in several animal species. However, the significance of this finding in humans is unknown.

Bacterial mutagenicity assays (Ames test) conducted with benzoyl peroxide have provided mixed results; mutagenic potential was observed in a few studies but not in a majority of investigations. Benzoyl peroxide has been found to cause DNA strand breaks in a variety of mammalian cell types and to cause sister chromatid exchanges in Chinese hamster ovary cells.

Fertility studies were not conducted with benzoyl peroxide.

The safety and efficacy of EPSOLAY was evaluated in two multicenter, randomized, double-blind, vehicle-controlled trials (Trial 1 [NCT03448939] and Trial 2 [NCT03564119]) in subjects with moderate-to-severe papulopustular rosacea. The trials were conducted in 733 subjects, aged 18 years and older. Subjects were treated once daily for 12 weeks with either EPSOLAY or vehicle cream.

Subjects were required to have a minimum of 15 to 70 total inflammatory lesions (papules and/or pustules) and no more than 2 nodules (where a nodule was defined as a papule or pustule greater than 5 mm in diameter) and an Investigator Global Assessment (IGA) score of 3 ("moderate") or 4 ("severe") at baseline. Overall, 93% of subjects were Caucasian, 73% were female, and the mean age was 51 years (ranged from 18 to 85 years). At baseline, subjects had a mean inflammatory lesion count of 27.5, 89% were scored as moderate (IGA=3), and 11% scored as severe (IGA=4).

The co-primary efficacy endpoints in both trials were the proportion of subjects with treatment success at Week 12, defined as an IGA score of 0 ("clear") or 1 ("almost clear") with at least a two-grade reduction from baseline, and the absolute change from baseline in inflammatory lesion counts at Week 12. The results at Week 12 are presented in Table 3. EPSOLAY was more effective than vehicle cream on the co-primary efficacy endpoints starting from 4 weeks of treatment in both trials, see Figure 1 through Figure 4.

EPSOLAY is a white to off-white cream supplied in an airless pump as follows:

Inform patients that EPSOLAY may cause irritation such as erythema, scaling, dryness, stinging or burning. Advise the patient to use a moisturizer for irritation [see Warnings and Precautions (5.2)].

Advise patients to minimize or avoid exposure to natural or artificial light (tanning beds or UVA/B treatment) and to use sun protective measures, if patients need to be outdoors while using EPSOLAY [see Warnings and Precautions (5.3)].

Advise patients to apply EPSOLAY exactly as directed in a thin layer, avoiding the eyes, lips and mouth and to wash hands immediately after application. Inform patients that EPSOLAY may bleach hair or colored fabric [see Dosage and Administration (2)].

For topical use only.
Not for ophthalmic, oral,
or intravaginal use.

Package is not child-resistant.
Keep out of reach of children. 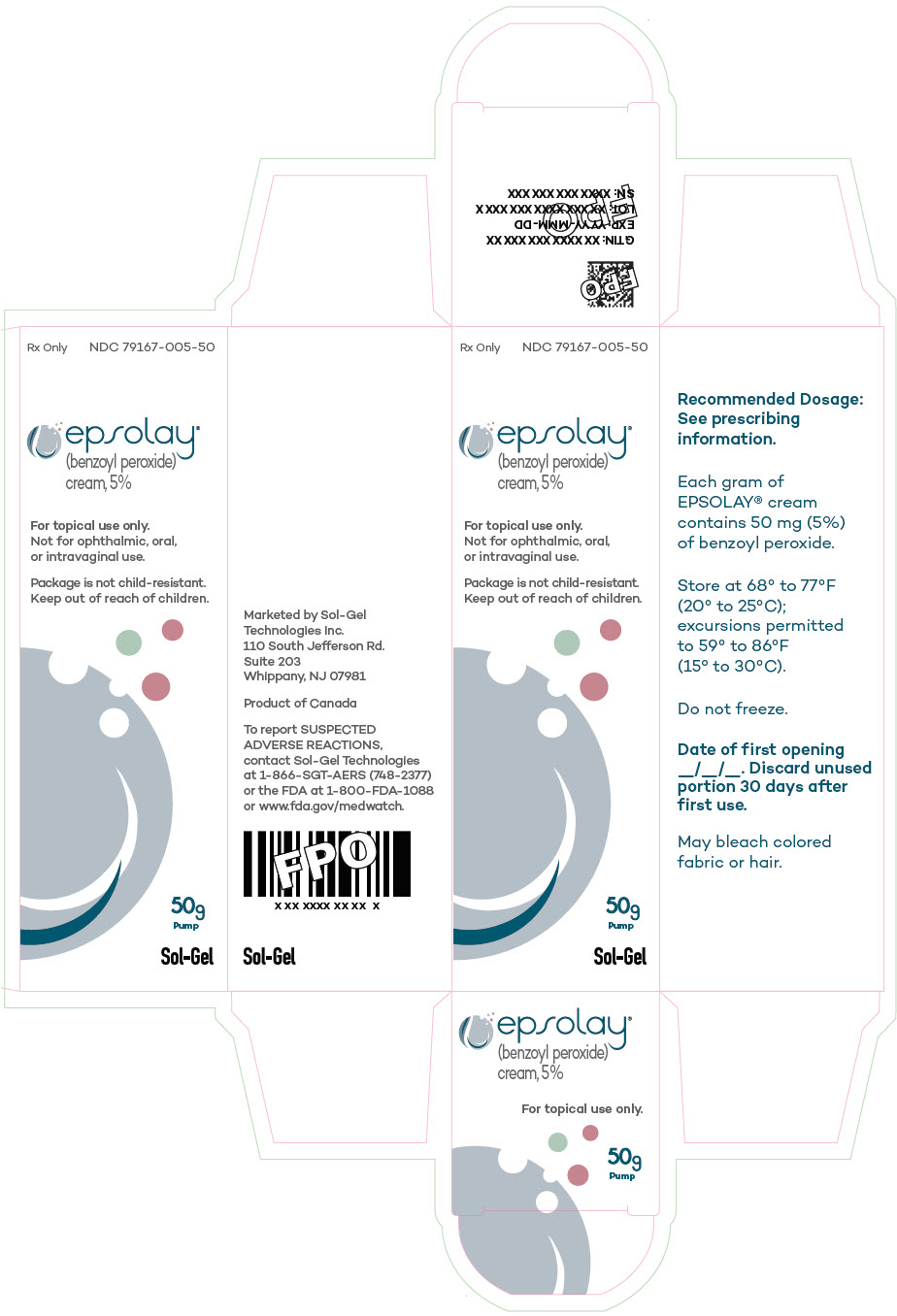