FOR DERMATOLOGIC USE ONLY
NOT FOR OPHTHALMIC USE

Ciclopirox Olamine Cream USP, 0.77% is for topical use.

Ciclopirox olamine cream has a pH of 7.

Pharmacokinetic studies in men with tagged ciclopirox solution in polyethylene glycol 400 showed an average of 1.3% absorption of the dose when it was applied topically to 750 cm2 on the back followed by occlusion for 6 hours. The biological half-life was 1.7 hours and excretion occurred via the kidney. Two days after application only 0.01% of the dose applied could be found in the urine. Fecal excretion was negligible.

Penetration studies in human cadaverous skin from the back, with Ciclopirox Olamine Cream USP, 0.77% with tagged ciclopirox showed the presence of 0.8 to 1.6% of the dose in the stratum corneum 1.5 to 6 hours after application. The levels in the dermis were still 10 to 15 times above the minimum inhibitory concentrations.

Ciclopirox olamine cream is indicated for the topical treatment of the following dermal infections: tinea pedis, tinea cruris, and tinea corporis due to Trichophyton rubrum, Trichophyton mentagrophytes, Epidermophyton floccosum, and Microsporum canis; candidiasis (moniliasis) due to Candida albicans; and tinea (pityriasis) versicolor due to Malassezia furfur.

Ciclopirox olamine cream is contraindicated in individuals who have shown hypersensitivity to any of its components.

Ciclopirox olamine cream is not for ophthalmic use.

If a reaction suggesting sensitivity or chemical irritation should occur with the use of ciclopirox olamine cream, treatment should be discontinued and appropriate therapy instituted.

A carcinogenicity study in female mice dosed cutaneously twice per week for 50 weeks followed by a 6-month drug-free observation period prior to necropsy revealed no evidence of tumors at the application site.

The following in vitro and in vivo genotoxicity tests have been conducted with ciclopirox olamine: studies to evaluate gene mutation in the Ames Salmonella/Mammalian Microsome Assay (negative) and Yeast Saccharomyces Cerevisiae Assay (negative) and studies to evaluate chromosome aberrations in vivo in the Mouse Dominant Lethal Assay and in the Mouse Micronucleus Assay at 500 mg/kg (negative).

The following battery of in vitro genotoxicity tests were conducted with ciclopirox: a chromosome aberration assay in V79 Chinese Hamster Cells, with and without metabolic activation (positive); a gene mutation assay in the HGPRT – test with V79 Chinese Hamster Cells (negative); and a primary DNA damage assay (i.e., unscheduled DNA Synthesis Assay in A549 Human Cells (negative)). An in vitro Cell Transformation Assay in BALB/C3T3 Cells was negative for cell transformation. In an in vivo Chinese Hamster Bone Marrow Cyctogenetic Assay, ciclopirox was negative for chromosome aberrations at 5000 mg/kg.

Reproduction studies have been performed in the mouse, rat, rabbit, and monkey (via various routes of administration) at doses 10 times or more the topical human dose and have revealed no significant evidence of impaired fertility or harm to the fetus due to ciclopirox. There are, however, no adequate or well-controlled studies in pregnant women. Because animal reproduction studies are not always predictive of human response, this drug should be used during pregnancy only if clearly needed.

Gently massage Ciclopirox Olamine Cream USP, 0.77% into the affected and surrounding skin areas twice daily, in the morning and evening. Clinical improvement with relief of pruritus and other symptoms usually occurs within the first week of treatment. If a patient shows no clinical improvement after four weeks of treatment with ciclopirox olamine cream, the diagnosis should be redetermined. Patients with tinea versicolor usually exhibit clinical and mycological clearing after two weeks of treatment.

Ciclopirox Olamine Cream USP, 0.77% is supplied in tubes of:

FOR DERMATOLOGIC USE ONLY.
NOT FOR OPHTHALMIC USE. 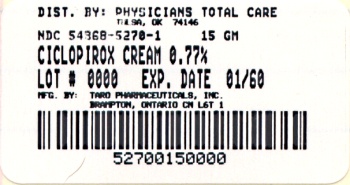