Caffeine USP, a central nervous system stimulant, is an odorless white crystalline substance or granule, with a bitter taste. It is freely soluble in chloroform, sparingly soluble in water and in alcohol, slightly soluble in ether. The chemical name of caffeine is 3,7-dihydro-1,3,7-trimethyl-1 H-purine-2,6-dione. In the presence of citric acid it forms caffeine citrate salt in solution. The structural formula and molecular weight of caffeine citrate follows. 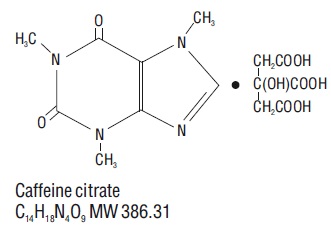 
Most of these effects have been attributed to antagonism of adenosine receptors, both A 1 and A 2 subtypes, by caffeine, which has been demonstrated in receptor binding assays and observed at concentrations approximating those achieved therapeutically.


After oral administration of 10 mg caffeine base/kg to preterm neonates, the peak plasma level (C max) for caffeine ranged from 6 to 10 mg/L and the mean time to reach peak concentration (T max) ranged from 30 minutes to 2 hours. The T max was not affected by formula feeding. The absolute bioavailability, however, was not fully examined in preterm neonates.


Caffeine is rapidly distributed into the brain. Caffeine levels in the cerebrospinal fluid of preterm neonates approximate their plasma levels. The mean volume of distribution of caffeine in infants (0.8 to 0.9 L/kg) is slightly higher than that in adults (0.6 L/kg). Plasma protein binding data are not available for neonates or infants. In adults, the mean plasma protein binding in vitro is reported to be approximately 36%.


Hepatic cytochrome P450 1A2 (CYP1A2) is involved in caffeine biotransformation. Caffeine metabolism in preterm neonates is limited due to their immature hepatic enzyme systems.


In young infants, the elimination of caffeine is much slower than that in adults due to immature hepatic and/or renal function. Mean half-life (T 1/2) and fraction excreted unchanged in urine (A e) of caffeine in infants have been shown to be inversely related to gestational/postconceptual age. In neonates, the T 1/2 is approximately 3 to 4 days and the A e is approximately 86% (within 6 days). By 9 months of age, the metabolism of caffeine approximates that seen in adults (T 1/2 = 5 hours and A e = 1%).

One multicenter, randomized, double-blind trial compared caffeine citrate to placebo in eighty-five (85) preterm infants (gestational age 28 to <33 weeks) with apnea of prematurity. Apnea of prematurity was defined as having at least 6 apnea episodes of greater than 20 seconds duration in a 24-hour period with no other identifiable cause of apnea. A 1 mL/kg (20 mg/kg caffeine citrate providing 10 mg/kg as caffeine base) loading dose of caffeine citrate was administered intravenously, followed by a 0.25 mL/kg (5 mg/kg caffeine citrate providing 2.5 mg/kg of caffeine base) daily maintenance dose administered either intravenously or orally (generally through a feeding tube). The duration of treatment in this study was limited to 10 to 12 days. The protocol allowed infants to be "rescued" with open-label caffeine citrate treatment if their apnea remained uncontrolled during the double-blind phase of the trial.


The percentage of patients without apnea on day 2 of treatment (24 to 48 hours after the loading dose) was significantly greater with caffeine citrate than placebo. The following table summarizes the clinically relevant endpoints evaluated in this study:

1 Of 85 patients who received drug, 3 were not included in the efficacy analysis because they had <6 apnea episodes/24 hours at baseline.

Caffeine citrate injection USP is indicated for the treatment of apnea of prematurity.

Caffeine citrate injection USP is contraindicated in patients who have demonstrated hypersensitivity to any of its components.

Apnea of prematurity is a diagnosis of exclusion. Other causes of apnea (e.g., central nervous system disorders, primary lung disease, anemia, sepsis, metabolic disturbances, cardiovascular abnormalities, or obstructive apnea) should be ruled out or properly treated prior to initiation of caffeine citrate injection.


Caffeine is a central nervous system stimulant and in cases of caffeine overdose, seizures have been reported. Caffeine citrate should be used with caution in infants with seizure disorders.


The duration of treatment of apnea of prematurity in the placebo-controlled trial was limited to 10 to 12 days. The efficacy of caffeine citrate for longer periods of treatment has not been established. Safety and efficacy of caffeine citrate for use in the prophylactic treatment of sudden infant death syndrome (SIDS) or prior to extubation in mechanically ventilated infants have also not been established.


In the placebo-controlled clinical trial, caffeine levels ranged from 8 to 40 mg/L. A therapeutic plasma concentration range of caffeine could not be determined from the placebo-controlled clinical trial. Serious toxicity has been reported in the literature when serum caffeine levels exceed 50 mg/L. Serum concentrations of caffeine may need to be monitored periodically throughout treatment to avoid toxicity.


In clinical studies reported in the literature, cases of hypoglycemia and hyperglycemia have been observed. Therefore, serum glucose may need to be periodically monitored in infants receiving caffeine citrate.


Caffeine administered concurrently with ketoprofen reduced the urine volume in four healthy volunteers. The clinical significance of this interaction in preterm neonates is not known.


Interconversion between caffeine and theophylline has been reported in preterm neonates. The concurrent use of these drugs is not recommended.


Caffeine (as caffeine base) increased the sister chromatid exchange (SCE) SCE/cell metaphase (exposure time dependent) in an in vivo mouse metaphase analysis. Caffeine also potentiated the genotoxicity of known mutagens and enhanced the micronuclei formation (5-fold) in folate-deficient mice. However, caffeine did not increase chromosomal aberrations in in vitro Chinese hamster ovary cell (CHO) and human lymphocyte assays and was not mutagenic in an in vitro CHO/hypoxanthine guanine phosphoribosyltransferase (HGPRT) gene mutation assay, except at cytotoxic concentrations. In addition, caffeine was not clastogenic in an in vivo mouse micronucleus assay.


Caffeine (as caffeine base) administered to male rats at 50 mg/kg/day subcutaneously (approximately equal to the maximum recommended intravenous loading dose for infants on a mg/m 2 basis) for 4 days prior to mating with untreated females, caused decreased male reproductive performance in addition to causing embryotoxicity. In addition, long-term exposure to high oral doses of caffeine (3 g over 7 weeks) was toxic to rat testes as manifested by spermatogenic cell degeneration.


Concern for the teratogenicity of caffeine is not relevant when administered to infants. In studies performed in adult animals, caffeine (as caffeine base) administered to pregnant mice as sustained release pellets at 50 mg/kg (less than the maximum recommended intravenous loading dose for infants on a mg/m 2 basis), during the period of organogenesis, caused a low incidence of cleft palate and exencephaly in the fetuses. There are no adequate and well-controlled studies in pregnant women.


In addition to the cases above, three cases of necrotizing enterocolitis were diagnosed in patients receiving caffeine citrate during the open-label phase of the study.


Three of the infants who developed necrotizing enterocolitis during the trial died. All had been exposed to caffeine. Two were randomized to caffeine, and one placebo patient was “rescued” with open-label caffeine for uncontrolled apnea.


A published randomized, placebo-controlled, clinical trial in premature infants with birthweights of 500 to 1250 grams studied the safety of caffeine citrate in apnea of prematurity (NCT00182312). This trial randomized approximately 2000 premature infants with a mean gestational age of 27 weeks at birth. The median duration of caffeine therapy was 37 days. Prior to discharge home, death, ultrasonographic signs of brain injury, and necrotizing enterocolitis were not more common in the caffeine citrate group compared to the placebo. At follow up at both 18 months and 5 years corrected age, death was not more common in the caffeine citrate treated group compared to placebo, nor did caffeine citrate use adversely affect neurodevelopmental outcomes.


Treatment of caffeine overdose is primarily symptomatic and supportive. Caffeine levels have been shown to decrease after exchange transfusions. Convulsions may be treated with intravenous administration of diazepam or a barbiturate such as pentobarbital sodium.


To test for drug compatibility with common intravenous solutions or medications, 20 mL of caffeine citrate injection were combined with 20 mL of a solution or medication, with the exception of an Intralipid ® admixture, which was combined as 80 mL/80 mL. The physical appearance of the combined solutions was evaluated for precipitation. The admixtures were mixed for 10 minutes and then assayed for caffeine. The admixtures were then continually mixed for 24 hours, with further sampling for caffeine assays at 2, 4, 8, and 24 hours.


Based on this testing, caffeine citrate injection USP, 60 mg/3 mL is chemically stable for 24 hours at room temperature when combined with the following test products.

Caffeine citrate Injection USP 60 mg/3 mL is a clear, colorless aqueous solution, individually packaged in a carton and is available as follows.


Preservative free. For single use only. Discard unused portion.

NDC 42571-244-69
Caffeine Citrate
Injection USP
60 mg/3 mL
For Intravenous Use Only
For single use only;
discard unused portion.
Rx Only
3 mL vial 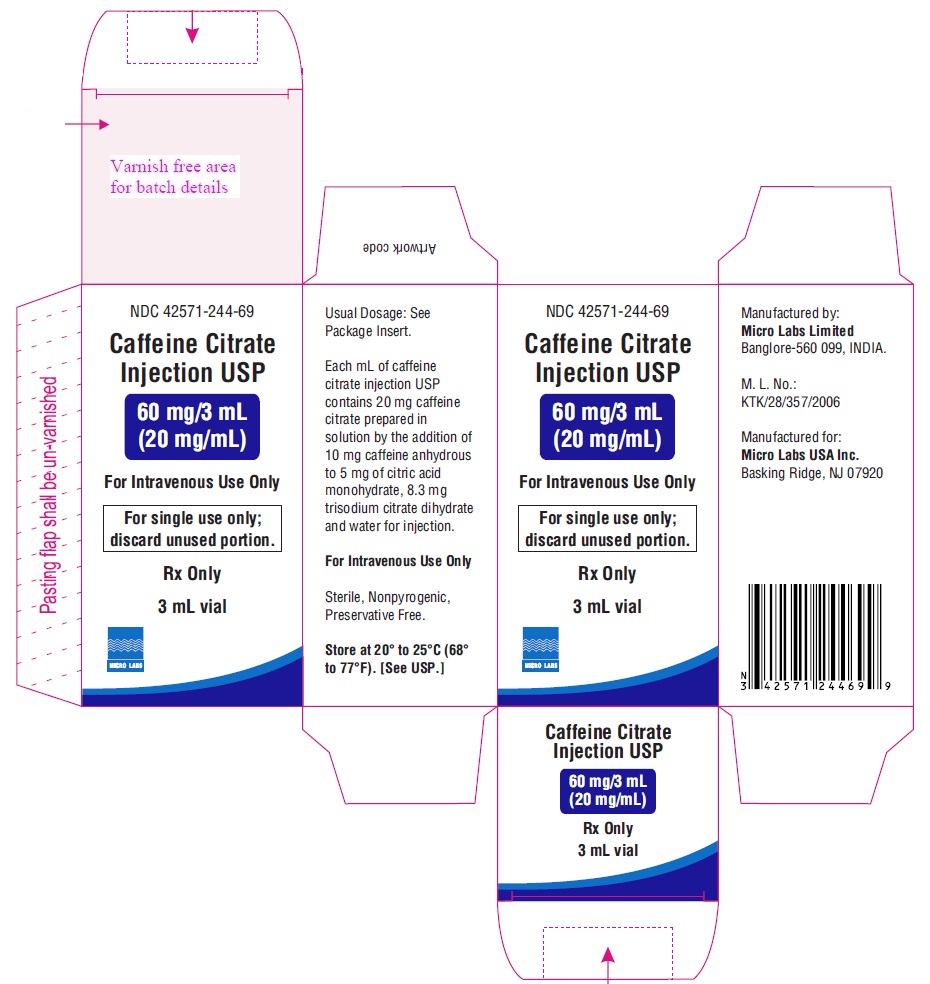