Melphalan hydrochloride for injection should be administered under the supervision of a qualified physician experienced in the use of cancer chemotherapeutic agents. Severe bone marrow suppression with resulting infection or bleeding may occur. Controlled trials comparing intravenous (IV) to oral melphalan have shown more myelosuppression with the IV formulation. Hypersensitivity reactions, including anaphylaxis, have occurred in approximately 2% of patients who received the IV formulation. Melphalan is leukemogenic in humans. Melphalan produces chromosomal aberrations in vitro and in vivo and, therefore, should be considered potentially mutagenic in humans.

Melphalan hydrochloride for injection is supplied as a sterile,nonpyrogenic, freeze-dried powder.

Table 1. Criteria for Dosage Adjustment in a Randomized Clinical Trial

Pregnancy Category D. Melphalan may cause fetal harm when administered to a pregnant woman. While adequate animal studies have not been conducted with IV melphalan, oral (6 to 18 mg/m2/day for 10 days) and IP (18 mg/m2) administration in rats was embryolethal and teratogenic. Malformations resulting from melphalan included alterations of the brain (underdevelopment, deformation, meningocele, and encephalocele) and eye (anophthalmia and microphthalmos), reduction of the mandible and tail, as well as hepatocele (exomphaly). There are no adequate and well-controlled studies in pregnant women. If this drug is used during pregnancy, or if the patient becomes pregnant while taking this drug, the patient should be apprised of the potential hazard to the fetus. Women of childbearing potential should be advised to avoid becoming pregnant.

1.Melphalan hydrochloride for injection must be reconstituted by rapidly injecting 10 mL of the supplied diluent directly into the vial of lyophilized powder using a sterile needle (20-gauge or larger needle diameter) and syringe. Immediately shake vial vigorously until a clear solution is obtained. This provides a 5 mg/mL solution of melphalan. Rapid addition of the diluent followed by immediate vigorous shaking is important for proper dissolution.

2.   Immediately dilute the dose to be administered in 0.9% Sodium Chloride Injection, USP, to a concentration not greater than 0.45 mg/mL.

3.   Administer the diluted product over a minimum of 15 minutes.

4.   Complete administration within 60 minutes of reconstitution.

PREMIERProRx® is a registered trademark of Premier Healthcare Alliance, L.P., used under license 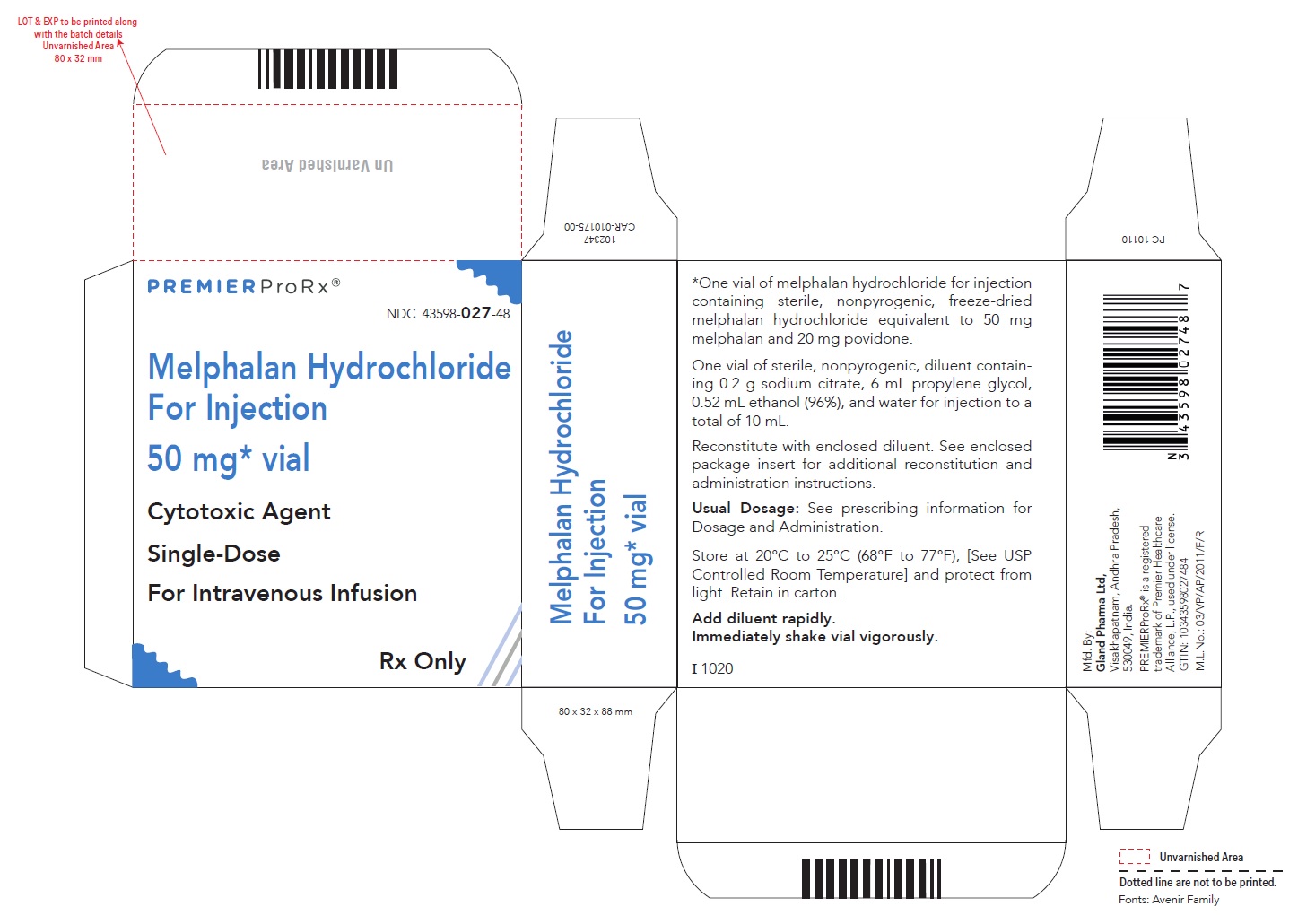