CETRAXAL is a quinolone antimicrobial indicated for the treatment of acute otitis externa due to susceptible isolates of Pseudomonas aeruginosa or Staphylococcus aureus.

The contents of one single use container (deliverable volume: 0.25 mL) should be instilled into the affected ear twice daily (approximately 12 hours apart) for 7 days.

CETRAXAL is a sterile, preservative-free, otic solution of ciprofloxacin hydrochloride equivalent to 0.2 % ciprofloxacin (0.5 mg in 0.25 mL) in each single use container.

CETRAXAL is contraindicated in persons with a history of hypersensitivity to ciprofloxacin.

CETRAXAL is for otic use only. It should not be used for injection, for inhalation or for topical ophthalmic use.

CETRAXAL should be discontinued at the first appearance of a skin rash or any other sign of hypersensitivity.

As with other anti-infectives, use of CETRAXAL may result in overgrowth of nonsusceptible organisms, including yeast and fungi. If super-infection occurs, discontinue use and institute alternative therapy.

If the infection is not improved after one week of therapy, cultures may help guide further treatment.

In a randomized, active-controlled clinical trial, approximately 300 patients with clinical signs and symptoms of otitis externa were treated with CETRAXAL. The most frequently reported adverse reactions were application site pain, ear pruritus, fungal ear superinfection, and headache, each reported in approximately 2-3% of patients.

Reproduction studies have been performed in rats and mice using oral doses of up to 100 mg/kg and intravenous (IV) doses up to 30 mg/kg and have revealed no evidence of harm to the fetus as a result of ciprofloxacin. In rabbits, ciprofloxacin (30 and 100 mg/kg orally) produced gastrointestinal disturbances resulting in maternal weight loss and an increased incidence of abortion, but no teratogenicity was observed at either dose. After intravenous administration of doses up to 20 mg/kg, no maternal toxicity was produced in the rabbit, and no embryotoxicity or teratogenicity was observed.

Animal reproduction studies have not been conducted with CETRAXAL. No adequate and well-controlled studies have been performed in pregnant women. Caution should be exercised when CETRAXAL is used by a pregnant woman.

Ciprofloxacin is excreted in human milk with systemic use. It is not known whether ciprofloxacin is excreted in human milk following otic use. Because of the potential for serious adverse reactions in nursing infants, a decision should be made whether to discontinue nursing or to discontinue the drug, taking into account the importance of the drug to the mother.

The safety and effectiveness of CETRAXAL in infants below one year of age have not been established. The efficacy of CETRAXAL in treating otitis externa in pediatric patients one year or older has been demonstrated in controlled clinical trials (see Section14 Clinical Studies).

CETRAXAL (ciprofloxacin otic solution) 0.2% contains the synthetic antimicrobial agent ciprofloxacin hydrochloride. CETRAXAL is a sterile, preservative-free solution for otic use. Each single use container of CETRAXAL delivers 0.25 mL of solution equivalent to 0.5 mg of ciprofloxacin. The inactive ingredients are povidone, glycerin, and water for injection. Sodium hydroxide and/or lactic acid may be added to adjust pH.

Ciprofloxacin, a fluroquinolone is available as the monohydrochloride, monohydrate salt of 1-cyclopropyl-6-fluoro-1,4-dihydro-4-oxo-7-(1-piperazinyl)-3-quinolinecarboxylic acid. Its molecular formula is C17H18FN3O3•HCl•H2O, and molecular weight is 385.82.

The chemical structure of ciprofloxacin hydrochloride is:

The bactericidal action of ciprofloxacin results from interference with the enzyme DNA gyrase, which is needed for the synthesis of bacterial DNA.

Bacterial resistance to quinolones can develop through chromosomally- or plasmid-mediated mechanisms.

Ciprofloxacin has been shown to be active against most isolates of the following bacteria, both in vitro and in clinical infections of acute otitis externa as described in Section 1 Indications and Usage.
Staphylococcus aureus
Pseudomonas aeruginosa.

Long-term carcinogenicity studies in mice and rats have been completed for ciprofloxacin. After daily oral doses of 750 mg/kg (mice) and 250 mg/kg (rats) were administered for up to 2 years, there was no evidence that ciprofloxacin had any carcinogenic or tumorigenic effects in these species. No long-term studies of CETRAXAL have been performed to evaluate carcinogenic potential.

Eight in vitro mutagenicity tests have been conducted with ciprofloxacin, and the test results are listed below:

Two of the 8 in vitro tests were positive, but results of the following 3 in vivo test systems gave negative results:

Fertility studies performed in rats at oral doses of ciprofloxacin up to 100 mg/kg/day revealed no evidence of impairment. This would be over 100 times the maximum recommended clinical dose of ototopical ciprofloxacin based upon body surface area, assuming total absorption of ciprofloxacin from the ear of a patient treated with CETRAXAL twice per day.

In a randomized, multi-center, evaluator-blinded study of patients with acute otitis externa, patients were treated with either CETRAXAL twice daily or neomycin and polymyxin B sulfates and hydrocortisone otic solution (PNH) three times daily for 7 days.

CETRAXAL should be given 2 times each day (about 12 hours apart) in each infected ear.

CETRAXAL should be used for as long as it is prescribed, even if the symptoms improve. The patient should be advised to follow these directions while on CETRAXAL:

Patients should be advised to immediately discontinue CETRAXAL at the first appearance of a skin rash or any other sign of hypersensitivity [see Section 5.1 Warnings and Precautions].

CETRAXAL® is a registered trademark of Laboratorios SALVAT, S.A. 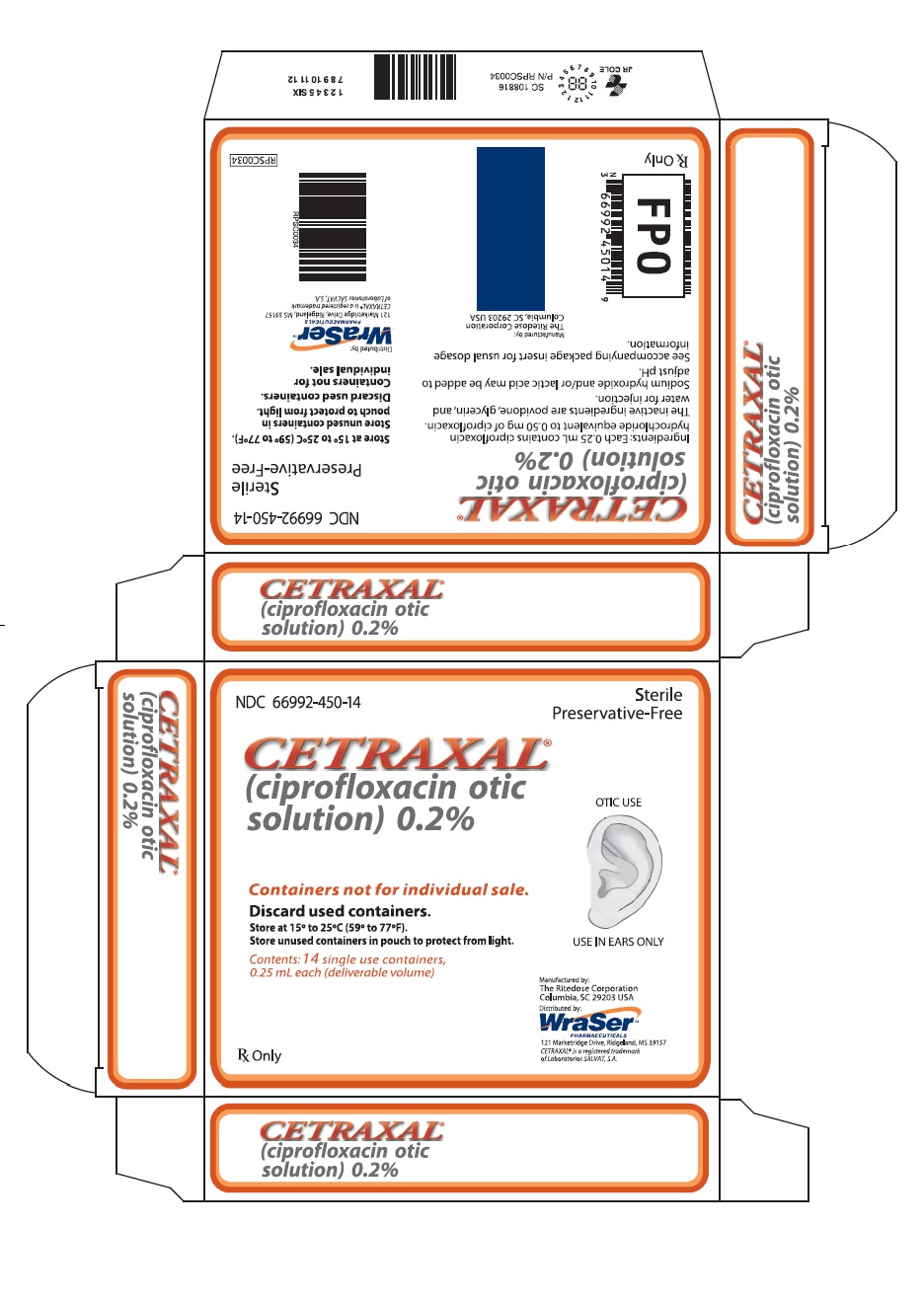