Sodium chloride comprises over 90% of the inorganic constituents of the blood serum. Both its ions are physiologically important. Sodium, more than any other ion, determines the osmotic pressure of interstitial fluids and the degree of hydration of tissues. When the intake of the chloride ion is less than is excreted, there is a relative increase in the blood bicarbonate level, producing the condition known as alkalosis. Other symptoms of sodium chloride deficiency are nausea, vomiting and increased irritability of muscles, evidenced by cramps and, possibly, convulsions. It is well known that excessive sweating will cause ‘‘heatcramps,’’ i.e., muscle cramps in the abdomen and extremities, which can be completely relieved only by ingestion of a weak salt solution.
Approximately 25% of the total body sodium is found in the bone. The regulation of salt and water metabolism is governed by different mechanisms; however, changes in the intake, distribution and output of salt are, in health, associated with collateral shifts of water so that electrolyte concentrations are maintained within a narrow range. In the presence of disease affecting the cardiovascular, hepatic or renal system or in certain endocrinologic disorders, changes in the rate of excretion of salt and water will disturb the homeostatic equilibrium. Frequently, abnormalities in the metabolism of water or salt may occur as a result of vomiting, diarrhea, gastrointestinal suction and fever. Excessive sweating will produce loss of water or salt, but since the electrolyte concentration is hypotonic, loss of water will predominate.
The normal salt intake ranges from 5 to 15 grams daily, most of which is excreted by the kidneys. The control of water and salt excretion in urine is very intricate, involving filtration by the glomerulus and reabsorption by the tubules of approximately 99% of the filtered load. The actual quantities excreted depends on the requirements prevailing at the moment. The finer adjustments of the tubular absorptive mechanisms are influenced by osmotic interrelationships between cell water, plasma and urine and by certain steroid hormones influencing electrolyte excretion and the posterior pituitary hormone regulating water excretion. When food intake ceases or salt is withheld, the content of sodium chloride in urine diminishes rapidly so that the body stores are retained. Similar renal retention of electrolytes occurs when salt is lost via gastrointestinal secretion through vomiting, etc. In other conditions, such as congestive heart failure, cirrhosis, nephritis or hypersecretion of the adrenal cortical hormones, the kidney fails to eliminate sufficient sodium. This results in retention of both salt and water, producing an excessive accumulation of extracellular fluid, which may be effectively combated by a sharp restriction of salt intake and use of a diuretic.
Depletion of body salt may be caused in many ways, one of which is too energetic treatment of fluid and sodium retention. Besides this, diabetic acidosis, burns, excessive sweating with free drinking of water, repeated paracentesis for removal of ascitic fluid, adrenal cortical hypofunction and certain forms of nephritis, as well as abnormal losses of gastrointestinal secretions, will cause marked salt depletion. With salt loss, there is a reduction of the osmotic pressure of the extracellular fluid; the urine volume may be retained but it is free of sodium chloride.

Sodium Chloride Injection, USP, 23.4%, is indicated as an additive in parenteral fluid therapy for use in patients who have special problems of sodium electrolyte intake or excretion. It is intended to meet the specific requirements of the patient with unusual fluid and electrolyte needs. After available clinical and laboratory information is considered and correlated, the appropriate number of milliequivalents of sodium chloride required can be withdrawn from Sodium Chloride Injection, USP, 23.4% and diluted for use.
Sodium Chloride Injection is indicated for the treatment of sodium, chloride and water deficiencies that commonly occur in many diseases. Isotonic Sodium Chloride Injection should be limited to cases in which the chloride loss is greater than the sodium loss, as in vomiting from pyloric obstruction, or in which the loss is about equal, as in vomiting from duodenal, jejunal or ileal obstruction and in the replacement of aspirated gastrointestinal fluids.
The toxic symptoms that follow various forms of intestinal obstruction are accompanied by a marked reduction of blood chloride and often sodium chloride has a lifesaving effect.
Symptoms of sodium chloride deficiency are very similar to those of Addison’s disease and large doses of sodium chloride will produce temporary alleviation of the symptoms. Other disorders in which sodium chloride is therapeutically useful include extensive burns, failure of gastric secretion and postoperative intestinal paralysis.

Surgical patients should seldom receive salt- containing solutions immediately following surgery unless factors producing salt depletion are present. Because of renal retention of salt during surgery, additional electrolyte given intravenously may result in fluid retention, edema and overloading of the circulation.

This product contains aluminum that may be toxic. Aluminum may reach toxic levels with prolonged parenteral administration if kidney function is impaired. Premature neonates are particularly at risk because their kidneys are immature, and they require large amounts of calcium and phosphate solutions, which contain aluminum. Research indicates that patients with impaired kidney function, including premature neonates, who receive parenteral levels of aluminum at greater than 4 to 5 mcg/kg/day accumulate aluminum at levels associated with central nervous system and bone toxicity. Tissue loading may occur at even lower rates of administration.
Sodium Chloride Injection, USP, 23.4% is hypertonic and must be diluted prior to administration. Inadvertent direct injection or absorption of concentrated sodium chloride solution may give rise to sudden hypernatremia and such complications as cardiovascular shock, central nervous system disorders, extensive hemolysis and cortical necrosis of the kidneys.

General
Excessive amounts of sodium chloride by any route may cause hypopotassemia and acidosis. Excessive amounts by the parenteral route may precipitate congestive heart failure and acute pulmonary edema, especially in patients with cardiovascular disease and in patients receiving corticosteroids or corticotropin or drugs that may give rise to sodium retention.

Use in Children
Safety and effectiveness in children have not been established.

Parenteral administration of quantities of sodium in excess of the amount of water or sodium chloride needed or at a rate more rapid than can be accommodated by the patient’s circulatory function may result in edema and clinical findings resembling those of congestive heart failure. Adverse effects are particularly likely to develop in patients with impaired renal or cardiac function.
Signs of postoperative salt intolerance include cellular dehydration, weakness, disorientation, anorexia, nausea, distention, deep respiration, oliguria and increased blood urea nitrogen.

Administration of too much sodium chloride may result in serious electrolyte disturbances with resulting retention of water, edema, loss of potassium and aggravation of an existing acidosis.

When intake of sodium chloride is excessive, excretion of crystalloids is increased in an attempt to maintain normal osmotic pressure. Thus there is increased excretion of potassium and of bicarbonate and, consequently, a tendency toward acidosis. There is also a rapid elimination of any foreign salt, such as iodide and bromide, being used for therapy.

The dosage of Sodium Chloride Injection, USP, 23.4%, as an additive in parenteral fluid therapy is predicated on specific requirements of the patient after necessary clinical and laboratory information is considered and correlated. The appropriate volume is then withdrawn for proper dilution. Having determined the milliequivalents of sodium chloride to be added, divide by four to calculate the numbers of milliliters (mL) of sodium chloride to be used. Withdraw this volume aseptically and transfer the additive solution into appropriate intravenous solutions such as 5% Dextrose Injection. The properly diluted solutions may be given intravenously.
Parenteral drug products should be inspected visually for particulate matter and discoloration prior to administration, whenever solution and container permit.

Store at 20° to 25°C (68° to 77°F) [See USP Controlled Room Temperature]. Preservative Free. Discard unused portion.
Use only if solution is clear and seal intact. 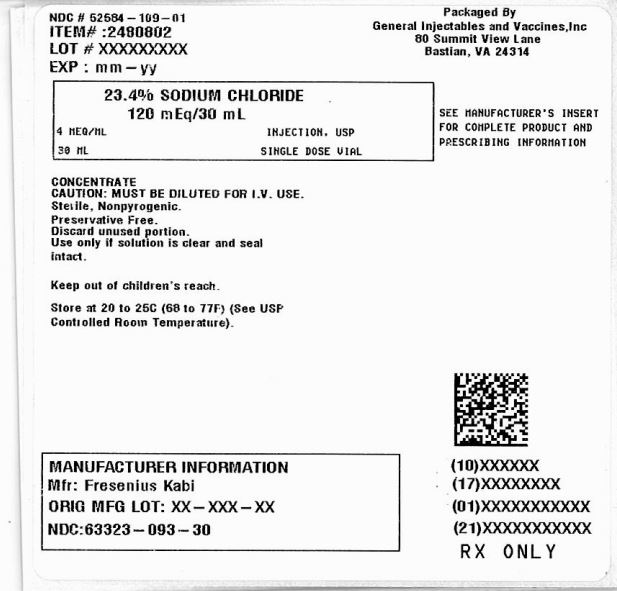