The effect of icosapent ethyl capsules on the risk for pancreatitis in patients with severe hypertriglyceridemia has not been determined.

2.1 Prior to Initiation of Icosapent Ethyl Capsules

-four 0.5 gram capsules twice daily with food; or as

Icosapent ethyl capsules are supplied as:

Icosapent ethyl capsules are contraindicated in patients with known hypersensitivity (e.g., anaphylactic reaction) to icosapent ethyl or any of its components.

5.2 Potential for Allergic Reactions in Patients with Fish Allergy

The following important adverse reactions are described below and elsewhere in the labeling:

In two randomized, double-blind, placebo-controlled trials in patients with triglyceride levels between 200 and 2000 mg/dL treated for 12 weeks, adverse reactions reported with icosapent ethyl at an incidence ≥1% more frequent than placebo based on pooled data included arthralgia and oropharyngeal pain.

Additional adverse reactions have been identified during post-approval use of icosapent ethyl capsules. Because these reactions are reported voluntarily from a population of uncertain size, it is generally not possible to reliably estimate their frequency or establish a causal relationship to drug exposure.

The available data from published case reports and the pharmacovigilance database on the use of icosapent ethyl in pregnant women are insufficient to identify a drug-associated risk for major birth defects, miscarriage or adverse maternal or fetal outcomes. In animal reproduction studies in pregnant rats, non-dose-related imbalances for some minor developmental findings were observed with oral administration of icosapent ethyl during organogenesis at exposures that were equivalent to the clinical exposure at the human dose of 4 g/day, based on body surface area comparisons. In a study in pregnant rabbits orally administered icosapent ethyl during organogenesis, there were no clinically relevant adverse developmental effects at exposures that were 5 times the clinical exposure, based on body surface area comparisons (see Data).

In pregnant rats given oral gavage doses of 0.3, 1 and 2 g/kg/day icosapent ethyl from gestation through organogenesis all drug treated groups had non-dose-related imbalances in visceral and skeletal findings, including 13th reduced ribs, additional liver lobes, testes medially displaced and/or not descended, at human systemic exposures following a maximum oral dose of 4 g/day based on body surface comparisons. In a multigenerational developmental study in pregnant rats given doses of 0.3, 1, 3 g/kg/day icosapent ethyl by oral gavage from gestation day 7-17, icosapent ethyl did not affect viability in fetuses (F1 or F2). Non-dose-related imbalances in findings of absent optic nerves and unilateral testes atrophy at human exposures based on the maximum dose of 4 g/day and on body surface area comparisons.

Additional variations consisting of early incisor eruption and increased percent cervical ribs were observed at the same exposures. Pups from high dose treated dams exhibited decreased copulation rates, delayed estrus, decreased implantations and decreased surviving fetuses (F2) suggesting potential multigenerational effects of icosapent ethyl at 7 times human systemic exposure following 4 g/day dose based on body surface area comparisons across species. In pregnant rabbits given oral gavage doses of 0.1, 0.3, and 1 g/kg/day icosapent ethyl from gestation through organogenesis, a decrease in body weight and food consumption was observed at the high dose of 1 g/kg/day (5 times the human exposure at the maximum dose of 4 g/day, based on body surface area comparisons). Slight increases in resorbed and dead fetuses were noted in the 1 g/kg/day group, but these were not significantly different from the control group. There were no differences between the icosapent ethyl groups and control group as to the number of corpora lutea, number of implantations, number of surviving fetuses, sex ratio, body weight of female fetuses or placental weight. There were no treatment-related malformations or skeletal anomalies.

In pregnant rats given icosapent ethyl from gestation day 17 through lactation day 20 at 0.3, 1, 3 g/kg/day no adverse maternal or developmental effects were observed. However, complete litter loss (not dose-related) was noted in 2/23 litters at the low dose and 1/23 mid-dose dams by post-natal day 4 at human exposures at a maximum dose of 4 g/day, based on body surface area comparisons.

Of the total number of patients in well-controlled clinical studies of icosapent ethyl, 45% were 65 years of age and over. No overall differences in safety or effectiveness were observed between these patients and younger groups. Other reported clinical experience has not identified differences in responses between the elderly and younger patients. 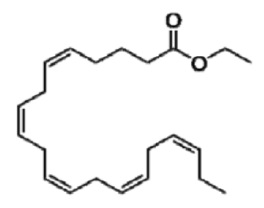 The mean volume of distribution at steady state of EPA is approximately 88 liters. The majority of EPA circulating in plasma is incorporated in phospholipids, triglycerides and cholesteryl esters, and <1% is present as the unesterified fatty acid. Greater than 99% of unesterified EPA is bound to plasma proteins.

EPA is mainly metabolized by the liver via beta-oxidation similar to dietary fatty acids. Beta oxidation splits the long carbon chain of EPA into acetyl Coenzyme A, which is converted into energy via the Krebs cycle. Cytochrome P450-mediated metabolism is a minor pathway of elimination of EPA.

The total plasma clearance of EPA at steady state is 684 mL/hr. The plasma elimination half-life (t1/2) of EPA is approximately 89 hours. Icosapent ethyl does not undergo renal excretion.

When administered icosapent ethyl in clinical trials, plasma total EPA concentrations did not differ significantly between men and women.

The pharmacokinetics of icosapent ethyl have not been studied in pediatric patients.

Icosapent ethyl has not been studied in patients with renal or hepatic impairment.

In a drug-drug interaction study with 28 healthy adult subjects, icosapent ethyl 4 g/day at steady-state did not significantly change the steady-state AUCτ or Cmax of omeprazole when co- administered at 40 mg/day to steady-state.

In a drug-drug interaction study with 28 healthy adult subjects, icosapent ethyl 4 g/day at steady-state did not significantly change the single dose AUC or Cmax of rosiglitazone at 8 mg.

In a drug-drug interaction study with 25 healthy adult subjects, icosapent ethyl 4 g/day at steady-state did not significantly change the single dose AUC or Cmax of R- and S­ warfarin or the anti-coagulation pharmacodynamics of warfarin when co-administered as racemic warfarin at 25 mg.

In a 2-year rat carcinogenicity study with oral gavage doses of 0.09, 0.27, and 0.91 g/kg/day icosapent ethyl, respectively, males did not exhibit drug-related neoplasms. Hemangiomas and hemangiosarcomas of the mesenteric lymph node, the site of drug absorption, were observed in females at clinically relevant exposures based on body surface area comparisons across species relative to the maximum clinical dose of 4 g/day. Overall incidence of hemangiomas and hemangiosarcomas in all vascular tissues did not increase with treatment.

In a 6-month carcinogenicity study in Tg.rasH2 transgenic mice with oral gavage doses of 0.5, 1, 2, and 4.6 g/kg/day icosapent ethyl, drug-related incidences of benign squamous cell papilloma in the skin and subcutis of the tail was observed in high dose male mice. The papillomas were considered to develop secondary to chronic irritation of the proximal tail associated with fecal excretion of oil and therefore not clinically relevant. Drug-related neoplasms were not observed in female mice.

In an oral gavage rat fertility study, ethyl-EPA, administered at doses of 0.3, 1, and 3 g/kg/day to male rats for 9 weeks before mating and to female rats for 14 days before mating through day 7 of gestation, increased anogenital distance in female pups and increased cervical ribs were observed at 3 g/kg/day (7 times human systemic exposure with 4 g/day clinical dose based on a body surface area comparison).

The effects of icosapent ethyl 4 grams per day were assessed in a randomized, placebo- controlled, double-blind, parallel-group study of adult patients (76 on icosapent ethyl, 75 on placebo) with severe hypertriglyceridemia. Patients whose baseline TG levels were between 500 and 2,000 mg/dL were enrolled in this study for 12 weeks. The median baseline TG and LDL-C levels in these patients were 684 mg/dL and 86 mg/dL, respectively. Median baseline HDL-C level was 27 mg/dL. The randomized population in this study was mostly Caucasian (88%) and male (76%). The mean age was 53 years and the mean body mass index was 31 kg/m2. Twenty- five percent of patients were on concomitant statin therapy, 28% were diabetics, and 39% of the patients had TG levels >750 mg/dL.

The changes in the major lipoprotein lipid parameters for the groups receiving icosapent ethyl or placebo are shown in Table 2.

Icosapent ethyl capsules are supplied as:

Inform patients that icosapent ethyl capsules may increase their risk for atrial fibrillation or atrial flutter [see Warnings and Precautions (5.1)].

Inform patients that icosapent ethyl capsules may increase their risk for bleeding, especially if they are receiving other antithrombotic agents [see Warnings and Precautions (5.3)].

Before taking icosapent ethyl capsules, tell your doctor about all of your medical conditions, including if you:

Tell your doctor about all the medicines you take, including prescription and over-the-counter medicines, vitamins, and dietary or herbal supplements.

Icosapent ethyl capsules can interact with certain other medicines that you are taking.

Especially tell your doctor if you take medicines that affect your blood clotting (anticoagulants or blood thinners).

How should I take icosapent ethyl capsules?

What are the possible side effects of icosapent ethyl capsules?

Possible allergic reactions if you are allergic to fish or shellfish. Stop taking icosapent ethyl capsules and tell your doctor right away or get emergency medical help if you have any signs or symptoms of an allergic reaction

Bleeding. Serious bleeding can happen in people who take icosapent ethyl capsules. Your risk of bleeding may increase if you are also taking a blood thinner medicine.

If you have liver problems and are taking icosapent ethyl capsules, your doctor should do blood tests during treatment.

The most common side effects of icosapent ethyl capsules include:

Swelling of the hands, legs, or feet.

These are not all the possible side effects of icosapent ethyl capsules. Call your doctor for medical advice about side effects. You may report side effects to FDA at 1-800-FDA-1088.

How should I store icosapent ethyl capsules?

Keep icosapent ethyl capsules and all medicine out of the reach of children.

General information about the safe and effective use of icosapent ethyl capsules.

You can ask your pharmacist or healthcare provider for information about icosapent ethyl capsules that is written for health professionals.

What are the ingredients in icosapent ethyl capsules?

This patient information has been approved by the U.S. Food and Drug Administration. 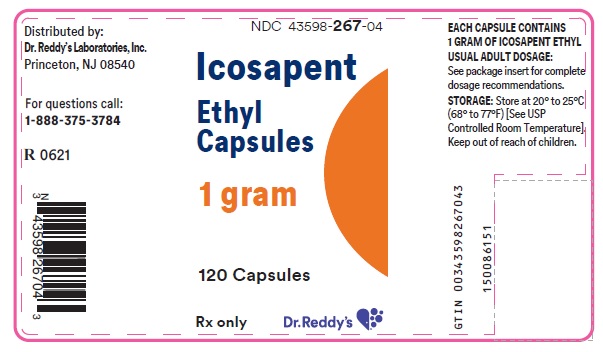