Thiamine hydrochloride, or vitamin B 1, occurs as white crystals or crystalline powder that usually has a slight characteristic odor.  Freely soluble in water; soluble in glycerin; slightly soluble in alcohol; insoluble in ether and benzene.  Thiamine is rapidly destroyed in neutral or alkaline solutions but is stable in the dry state.  It is reasonably stable to heat in acid solution.

The chemical name of thiamine hydrochloride is thiazolium,3-[(4-amino-2-methyl-5-pyrimidinyl)methyl]-5-(2-hydroxyethyl)-4-methylchloride, monohydrochloride and it has the following structural formula:

The water soluble vitamins are widely distributed in both plants and animals.  They are absorbed in man by both diffusion and active transport mechanisms.  These vitamins are structurally diverse (derivatives of sugar, pyridine, purines, pyrimidine, organic acid complexes and nucleotide complex) and act as coenzymes, as oxidation-reduction agents, possibly as mitochondrial agents.  Metabolism is rapid, and the excess is excreted in the urine.

Thiamine is distributed in all tissues.  The highest concentrations occur in liver, brain, kidney and heart.  When thiamine intake is greatly in excess of need, tissue stores increase two to three times.  If intake is insufficient, tissues become depleted of their vitamin content.  Absorption of thiamine following IM administration is rapid and complete.

The requirement for thiamine is greater when the carbohydrate content of the diet is raised.  Body depletion of vitamin B 1 can occur after approximately three weeks of total absence of thiamine in the diet.

Thiamine hydrochloride injection is effective for the treatment of thiamine deficiency or beriberi whether of the dry (major symptoms related to the nervous system) or wet (major symptoms related to the cardiovascular system) variety.  Thiamine hydrochloride injection should be used where rapid restoration of thiamine is necessary, as in Wernicke’s encephalopathy, infantile beriberi with acute collapse, cardiovascular disease due to thiamine deficiency, or neuritis of pregnancy if vomiting is severe.  It is also indicated when giving IV dextrose to individuals with marginal thiamine status to avoid precipitation of heart failure.

Thiamine hydrochloride injection is also indicated in patients with established thiamine deficiency who cannot take thiamine orally due to coexisting severe anorexia, nausea, vomiting, or malabsorption.  Thiamine hydrochloride injection is not usually indicated for conditions of decreased oral intake or decreased gastrointestinal absorption, because multiple vitamins should usually be given.

A history of sensitivity to thiamine or to any of the ingredients in this drug is a contraindication.  (See WARNINGS for further information.)

WARNING:  This product contains aluminum that may be toxic.  Aluminum may reach toxic levels with prolonged parenteral administration if kidney function is impaired.  Premature neonates are particularly at risk because their kidneys are immature, and they require large amounts of calcium and phosphate solutions, which contain aluminum.

Research indicates that patients with impaired kidney function, including premature neonates, who receive parenteral levels of aluminum at greater than 4 to 5 mcg/kg/day accumulate aluminum at levels associated with central nervous system and bone toxicity.  Tissue loading may occur at even lower rates of administration.

Routine testing for hypersensitivity, in many cases, may not detect hypersensitivity.  Nevertheless, a skin test should be performed on patients who are suspected of drug allergies or previous reactions to thiamine, and any positive responders should not receive thiamine by injection.

If hypersensitivity to thiamine is suspected (based on history of drug allergy or occurrence of adverse reactions after thiamine administration), administer one-hundredth of the dose intradermally and observe for 30 minutes.  If no reaction occurs, full dose can be given; the patient should be observed for at least 30 minutes after injection.  Be prepared to treat anaphylactic reactions regardless of the precautions taken.

Simple vitamin B 1 deficiency is rare.  Multiple vitamin deficiencies should be suspected in any case of dietary inadequacy.

The patient should be advised as to proper dietary habits during treatment so that relapses will be less likely to occur with reduction in dosage or cessation of injection therapy.

An occasional individual may develop a hypersensitivity or life-threatening anaphylactic reaction to thiamine, especially after repeated injections.  Collapse and death have been reported.  A feeling of warmth, pruritus, urticaria, weakness, sweating, nausea, restlessness, tightness of the throat, angioneurotic edema, cyanosis, pulmonary edema, and hemorrhage into the gastrointestinal tract have also been reported.  Some tenderness and induration may follow IM use (see WARNINGS).

In the treatment of beriberi, 10 to 20 mg of thiamine hydrochloride are given IM three times daily for as long as two weeks.  (See WARNINGS regarding repeated injections of thiamine.)  An oral therapeutic multivitamin preparation containing 5 to 10 mg thiamine, administered daily for one month, is recommended to achieve body tissue saturation.

In the treatment of Wernicke-Korsakoff syndrome, thiamine hydrochloride has been administered IV in an initial dose of 100 mg, followed by IM doses of 50 to 100 mg daily until the patient is consuming a regular, balanced diet.  (See WARNINGS regarding repeated injections of thiamine.) 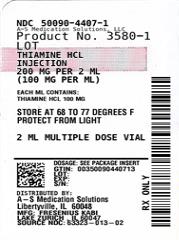