Melphalan should be administered in carefully adjusted dosage by or under the supervision of experienced physicians who are familiar with the drug's actions and the possible complications of its use.

As with other nitrogen mustard drugs, excessive dosage will produce marked bone marrow suppression. Bone marrow suppression is the most significant toxicity associated with melphalan hydrochloride for injection in most patients. Therefore, the following tests should be performed at the start of therapy and prior to each subsequent dose of melphalan hydrochloride: platelet count, hemoglobin, white blood cell count, and differential. Thrombocytopenia and/or leukopenia are indications to withhold further therapy until the blood counts have sufficiently recovered. Frequent blood counts are essential to determine optimal dosage and to avoid toxicity. Dose adjustment on the basis of blood counts at the nadir and day of treatment should be considered.

Melphalan may cause fetal harm when administered to a pregnant woman. While adequate animal studies have not been conducted with IV melphalan, oral (6 to 18 mg/m2/day for 10 days) and IP (18 mg/m2) administration in rats was embryolethal and teratogenic. Malformations resulting from melphalan included alterations of the brain (underdevelopment, deformation, meningocele, and encephalocele) and eye (anophthalmia and microphthalmos), reduction of the mandible and tail, as well as hepatocele (exomphaly). There are no adequate and well-controlled studies in pregnant women. If this drug is used during pregnancy, or if the patient becomes pregnant while taking this drug, the patient should be apprised of the potential hazard to the fetus. Women of childbearing potential should be advised to avoid becoming pregnant.

For medical advice about adverse reactions contact your medical professional. To report SUSPECTED ADVERSE REACTIONS, contact Par Pharmaceutical, Inc. at 1-800-828-9393 or FDA at 1-800-FDA-1088 or www.fda.gov/medwatch.

The usual IV dose is 16 mg/m2. Dosage reduction of up to 50% should be considered in patients with renal insufficiency (BUN ≥30 mg/dL) (see PRECAUTIONS: General). The drug is administered as a single infusion over 15 to 20 minutes. Melphalan is administered at 2-week intervals for 4 doses, then, after adequate recovery from toxicity, at 4-week intervals. Available evidence suggests about one third to one half of the patients with multiple myeloma show a favorable response to the drug. Experience with oral melphalan suggests that repeated courses should be given since improvement may continue slowly over many months, and the maximum benefit may be missed if treatment is abandoned prematurely. Dose adjustment on the basis of blood cell counts at the nadir and day of treatment should be considered.

As with other toxic compounds, caution should be exercised in handling and preparing the solution of melphalan hydrochloride. Skin reactions associated with accidental exposure may occur. The use of gloves is recommended. If the solution of melphalan hydrochloride contacts the skin or mucosa, immediately wash the skin or mucosa thoroughly with soap and water.

Procedures for proper handling and disposal of anticancer drugs should be considered. Several guidelines on this subject have been published.1-4 There is no general agreement that all of the procedures recommended in the guidelines are necessary or appropriate. 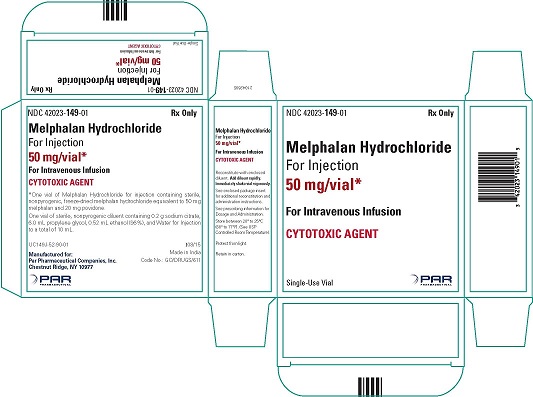