Praziquantel tablets are indicated in patients aged 1 year and older for the treatment of the following infections:

Schistosomiasis The recommended dosage for the treatment of schistosomiasis is 20 mg/kg body weight administered orally three times a day separated by 4 to 6 hours, for 1 day only.

The recommended dosage for the treatment of clonorchiasis and opisthorchiasis is 25 mg/kg body weight administered orally three times a day separated by 4 to 6 hours for 1 day only.

Praziquantel 600 mg tablets have three scores which can be split into four segments at the scores. When broken, each of the four segments contains 150 mg of praziquantel so that the dosage can be adjusted to the patient’s body weight. Segments are broken off by pressing the score (notch) with thumbnails. If one-quarter of a tablet is required, this is best achieved by breaking the segment from the outer end.

Praziquantel tablets, USP contain 600 mg of praziquantel, USP. The tablets are white to off white, film-coated, oblong tablet with three scores coded with “PAR” on one side “231” on the reverse side.

Praziquantel is contraindicated in:

The use of praziquantel in patients with schistosomiasis may be associated with clinical deterioration (for example, paradoxical reactions, serum sickness Jarisch-Herxheimer like reactions: sudden inflammatory immune response suspected to be caused by the release of schistosomal antigens). These reactions predominantly occur in patients treated during the acute phase of schistosomiasis. They may lead to potentially life-threatening events, for example, respiratory failure, encephalopathy, papilledema, and/or cerebral vasculitis.

Praziquantel can exacerbate central nervous system pathology due to schistosomiasis, paragonimiasis, or Taenia solium cysticercosis. As a general rule, consider whether to administer praziquantel to individuals reporting a history of epilepsy and/or other signs of potential central nervous systems involvement such as subcutaneous nodules suggestive of cysticercosis unless the potential benefit justifies the potential risk. Hospitalize the patient for duration of treatment when schistosomiasis or fluke infection is found to be associated with cerebral cysticercosis.

5.3  Potential Lack of Efficacy During the Acute Phase of Schistosomiasis

Concomitant administration of strong CYP450 inducers, such as rifampin with praziquantel is contraindicated since therapeutically effective levels of praziquantel may not be achieved. [see Contraindications (4) and Drug Interactions (7.1)].

The following serious or otherwise important adverse reactions are discussed elsewhere in the labeling:

The following adverse reactions associated with the use of praziquantel were identified in clinical studies, published literature or postmarketing reports. Because some of these reactions were reported voluntarily from a population of uncertain size, it is not always possible to reliably estimate their frequency or establish a causal relationship to drug exposure.

The following adverse reactions were observed in both adults and pediatric patients:

Such adverse reactions may be more frequent and/or serious in patients with a heavy worm burden.

Additional adverse reactions reported from worldwide post marketing experience and from publications with praziquantel and various formulations of praziquantel include:

Pediatric patients 1 to 17 years of age treated with praziquantel tablets and various formulations of praziquantel experienced similar adverse reactions as those observed in adult patients.

Concomitant administration of other drugs that are CYP450 inducers, for example, antiepileptic drugs (phenytoin, phenobarbital and carbamazepine), and dexamethasone, may also reduce plasma concentrations of praziquantel. [See Warnings and Precautions (5.6).]

Concomitant administration of drugs that decrease the activity of drug metabolizing liver enzymes (CYP450 inhibitors), for example, cimetidine, ketoconazole, itraconazole, erythromycin may increase plasma concentrations of praziquantel. In addition, grapefruit juice was also reported to produce a 1.6-fold increase in the Cmax and a 1.9-fold increase in the AUC of praziquantel. The effect of this exposure increase on the therapeutic effect and safety of praziquantel has not been systematically evaluated [see Dosage and Administration (2.2)].

Published studies have not identified an association with praziquantel use during pregnancy and major birth defects, miscarriage or adverse maternal or fetal outcomes (see Data). In animal reproduction studies conducted in pregnant rats and rabbits no adverse developmental outcomes were observed with oral administration of praziquantel during organogenesis at approximately 0.65 times (rats) or 1.3 times (rabbits) the highest recommended human daily dose of 75 mg/kg/day, based on body surface area.

In other published studies, including a retrospective observational study, case series and case reports, there have been no reports of major birth defects, stillbirths or other adverse pregnancy outcomes associated with the use of praziquantel during pregnancy.

No evidence of fetal harm was observed in rats and rabbits at praziquantel dose levels of 30 to 300 mg/kg body weight given repeatedly by oral administration during the period of organogenesis. These doses were up to 0.65 times (rats) or 1.3 times (rabbits) the highest recommended human daily dose of 75 mg/kg/day, based on body surface area.

Clinical studies of praziquantel did not include a sufficient number of subjects ages 65 and over to determine whether they respond differently from younger subjects. Other reported clinical experience has not identified differences in responses between the elderly and younger patients, but greater sensitivity of some older patients cannot be ruled out. This drug is known to be substantially excreted by the kidney. Because elderly patients are more likely to have decreased renal function, the risk of toxic reactions to this drug may be greater in these patients [see Clinical Pharmacology (12.3)].

No dosage adjustment of praziquantel is necessary in patients with renal impairment. Nephrotoxic effects of praziquantel or its metabolites are not known [see Clinical Pharmacology (12.3)].

Praziquantel, USP is an anthelmintic, trematodicide provided in tablet form for oral administration. 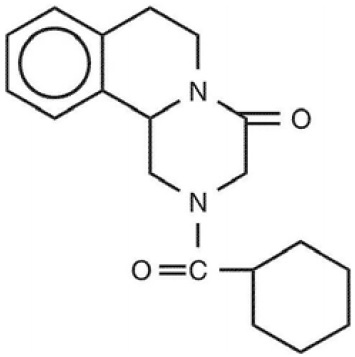 Praziquantel, USP is a white or almost white crystalline powder. The compound is stable under normal conditions and melts at 136°C to 142°C. The active substance is non-hygroscopic. Praziquantel, USP is freely soluble in ethanol (96 per cent) and in methylene chloride, practically insoluble in water.

After oral administration, 80% of an administered praziquantel dose is absorbed, with maximal serum concentrations of praziquantel achieved 1 to 3 hours after dosing.

Praziquantel is rapidly metabolized by the cytochrome P450 enzyme system and undergoes a first pass effect after oral administration of praziquantel.

Table 1: Pharmacokinetic parameters of praziquantel in four groups of patients with varying degrees of liver function following administration of 40 mg/kg of praziquantel tablets under fasting conditions.

Praziquantel induces a rapid contraction of schistosomes by a specific effect on the permeability of the cell membrane. The drug further causes vacuolization and disintegration of the schistosome tegument. However, the mechanism of action is unknown.

Praziquantel is active against schistosoma (for example, Schistosoma mekongi, Schistosoma japonicum, Schistosoma mansoni and Schistosoma hematobium), and infections due to the liver flukes, Clonorchis sinensis/Opisthorchis viverrini [see Indications and Usage (1)]. Published in vitro data have shown a potential lack of efficacy of praziquantel against migrating schistosomulae [see Warnings and Precautions (5.3)].

Praziquantel tablets, USP are supplied as 600 mg tablets containing praziquantel, USP. The tablets are white to off white, film-coated, oblong tablet with three scores coded with “PAR” on one side “231” on the reverse side.