Isosorbide dinitrate (ISDN) is 1,4:3,6-dianhydro-D-glucitol 2,5-dinitrate, an organic nitrate whose structural formula is 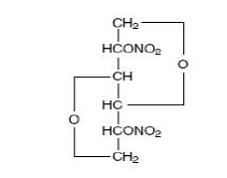 and whose molecular weight is 236.14. The organic nitrates are vasodilators, active on both arteries and veins.

Dosing regimens for most chronically used drugs are designed to provide plasma concentrations that are continuously greater than a minimally effective concentration. This strategy is inappropriate for organic nitrates. Several well-controlled clinical trials have used exercise testing to assess the anti-anginal efficacy of continuously-delivered nitrates. In the large majority of these trials, active agents were no more effective than placebo after 24 hours (or less) of continuous therapy. Attempts to overcome nitrate tolerance by dose escalation, even to doses far in excess of those used acutely, have consistently failed.

Only after nitrates have been absent from the body for several hours has their anti-anginal efficacy been restored.

Absorption of isosorbide dinitrate after oral dosing is nearly complete, but bioavailability is highly variable (10% to 90%), with extensive first-pass metabolism in the liver. Serum levels reach their maxima about an hour after ingestion. The average bioavailability of ISDN is about 25%; most studies have observed progressive increases in bioavailability during chronic therapy.

Once absorbed, the volume of distribution of isosorbide dinitrate is 2 L/kg to 4 L/kg, and this volume is cleared at the rate of 2 L/min to 4 L/min, so ISDN's half-life in serum is about an hour. Since the clearance exceeds hepatic blood flow, considerable extra hepatic metabolism must also occur. Clearance is affected primarily by denitration to the 2-mononitrate (15% to 25%) and the 5-mononitrate (75% to 85%).

Few well-controlled clinical trials of organic nitrates have been designed to detect rebound or withdrawal effects. In one such trial, however, subjects receiving nitroglycerin had less exercise tolerance at the end of the daily dose-free interval than the parallel group receiving placebo. The incidence, magnitude, and clinical significance of similar phenomena in patients receiving ISDN have not been studied.

In clinical trials, immediate-release oral isosorbide dinitrate has been administered in a variety of regimens, with total daily doses ranging from 30 mg to 480 mg. Controlled trials of single oral doses of isosorbide dinitrate have demonstrated effective reductions in exercise-related angina for up to 8 hours. Anti-anginal activity is present about 1 hour after dosing.

Most controlled trials of multiple-dose oral ISDN taken every 12 hours (or more frequently) for several weeks have shown statistically significant anti-anginal efficacy for only 2 hours after dosing. Once-daily regimens, and regimens with one daily dose-free interval of at least 14 hours (e.g., a regimen providing doses at 0800, 1400, and 1800 hours), have shown efficacy after the first dose of each day that was similar to that shown in the single-dose studies cited above. The effects of the second and later doses have been smaller and shorter-lasting than the effect of the first.

From large, well-controlled studies of other nitrates, it is reasonable to believe that the maximal achievable daily duration of anti-anginal effect from isosorbide dinitrate is about 12 hours. No dosing regimen for isosorbide dinitrate, however, has ever actually been shown to achieve this duration of effect. One study of 8 patients, who were administered a pretitrated dose (average 27.5 mg) of immediate-release ISDN at 0800, 1300, and 1800 hours for 2 weeks, revealed that significant anti-anginal effectiveness was discontinuous and totaled about 6 hours in a 24 hour period.

Isosorbide dinitrate tablets are indicated for the prevention of angina pectoris due to coronary artery disease. The onset of action of immediate-release oral isosorbide dinitrate is not sufficiently rapid for this product to be useful in aborting an acute anginal episode.

Do not use isosorbide dinitrate in patients who are taking certain drugs for erectile dysfunction (phosphodiesterase inhibitors), such as sildenafil, tadalafil, or vardenafil. Concomitant use can cause severe hypotension, syncope, or myocardial ischemia.

Do not use isosorbide dinitrate in patients who are taking the soluble guanylate cyclase stimulator riociguat. Concomitant use can cause hypotension.

Amplification of the vasodilatory effects of isosorbide dinitrate by sildenafil can result in severe hypotension. The time course and dose dependence of this interaction have not been studied. Appropriate supportive care has not been studied, but it seems reasonable to treat this as a nitrate overdose, with elevation of the extremities and with central volume expansion.

Severe hypotension, particularly with upright posture, may occur with even small doses of isosorbide dinitrate. This drug should therefore be used with caution in patients who may be volume depleted or who, for whatever reason, are already hypotensive. Hypotension induced by isosorbide dinitrate may be accompanied by paradoxical bradycardia and increased angina pectoris.

As tolerance to isosorbide dinitrate develops, the effect of sublingual nitroglycerin on exercise tolerance, although still observable, is somewhat blunted.

Some clinical trials in angina patients have provided nitroglycerin for about 12 continuous hours of every 24-hour day. During the daily dose-free interval in some of these trials, anginal attacks have been more easily provoked than before treatment, and patients have demonstrated hemodynamic rebound and decreased exercise tolerance. The importance of these observations to the routine, clinical use of immediate-release oral isosorbide dinitrate is not known.

Treatment with isosorbide dinitrate may be associated with lightheadedness on standing, especially just after rising from a recumbent or seated position. This effect may be more frequent in patients who have also consumed alcohol.

The vasodilating effects of isosorbide dinitrate may be additive with those of other vasodilators. Alcohol, in particular, has been found to exhibit additive effects of this variety.

Concomitant use of isosorbide dinitrate with phosphodiesterase inhibitors in any form is contraindicated (see CONTRAINDICATIONS).

Concomitant use of isosorbide dinitrate with riociguat, a soluble guanylate cyclase stimulator, is contraindicated (see CONTRAINDICATIONS).

No long-term studies in animals have been performed to evaluate the carcinogenic potential of isosorbide dinitrate. In a modified two-litter reproduction study, there was no remarkable gross pathology and no altered fertility or gestation among rats fed isosorbide dinitrate at 25 mg/kg/day or 100 mg/kg/day.

At oral doses 35 and 150 times the maximum recommended human daily dose, isosorbide dinitrate has been shown to cause a dose-related increase in embryotoxicity (increase in mummified pups) in rabbits. There are no adequate, well-controlled studies in pregnant women. Isosorbide dinitrate should be used during pregnancy only if the potential benefit justifies the potential risk to the fetus.

Clinical studies of isosorbide dinitrate did not include sufficient numbers of subjects aged 65 and over to determine whether they respond differently from younger subjects. Other reported clinical experience has not identified differences in responses between the elderly and younger patients. In general, dose selection for an elderly patient should be cautious, usually starting at the low end of the dosing range, reflecting the greater frequency of decreased hepatic, renal, or cardiac function, and of concomitant disease or other drug therapy.

Adverse reactions to isosorbide dinitrate are generally dose-related, and almost all of these reactions are the result of isosorbide dinitrate's activity as a vasodilator. Headache, which may be severe, is the most commonly reported side effect. Headache may be recurrent with each daily dose, especially at higher doses. Transient episodes of lightheadedness, occasionally related to blood pressure changes, may also occur. Hypotension occurs infrequently, but in some patients it may be severe enough to warrant discontinuation of therapy. Syncope, crescendo angina, and rebound hypertension have been reported but are uncommon.

Extremely rarely, ordinary doses of organic nitrates have caused methemoglobinemia in normal-seeming patients. Methemoglobinemia is so infrequent at these doses that further discussion of its diagnosis and treatment is deferred (see OVERDOSAGE).

Data are not available to allow estimation of the frequency of adverse reactions during treatment with isosorbide dinitrate tablets.

The ill effects of isosorbide dinitrate overdose are generally the results of isosorbide dinitrate's capacity to induce vasodilatation, venous pooling, reduced cardiac output, and hypotension. These hemodynamic changes may have protean manifestations, including increased intracranial pressure, with any or all of persistent throbbing headache, confusion, and moderate fever; vertigo; palpitations; visual disturbances; nausea and vomiting (possibly with colic and even bloody diarrhea); syncope (especially in the upright posture); air hunger and dyspnea, later followed by reduced ventilatory effort; diaphoresis, with the skin either flushed or cold and clammy; heart block and bradycardia; paralysis; coma; seizures; and death.

There are no data suggesting what dose of isosorbide dinitrate is likely to be life-threatening in humans. In rats, the median acute lethal dose (LD50) was found to be 1100 mg/kg.

No data are available to suggest physiological maneuvers (e.g., maneuvers to change the pH of the urine) that might accelerate elimination of isosorbide dinitrate and its active metabolites. Similarly, it is not known which, if any, of these substances can usefully be removed from the body by hemodialysis.

In patients with renal disease or congestive heart failure, therapy resulting in central volume expansion is not without hazard. Treatment of isosorbide dinitrate overdose in these patients may be subtle and difficult, and invasive monitoring may be required.

Notwithstanding these observations, there are case reports of significant methemoglobinemia in association with moderate overdoses of organic nitrates. None of the affected patients had been thought to be unusually susceptible.

Methemoglobin levels are available from most clinical laboratories. The diagnosis should be suspected in patients who exhibit signs of impaired oxygen delivery despite adequate cardiac output and adequate arterial pO2. Classically, methemoglobinemic blood is described as chocolate brown, without color change on exposure to air.

When methemoglobinemia is diagnosed, the treatment of choice is methylene blue, 1 mg/kg to 2 mg/kg intravenously.

As noted under CLINICAL PHARMACOLOGY, multiple-dose studies with ISDN and other nitrates have shown that maintenance of continuous 24-hour plasma levels results in refractory tolerance. Every dosing regimen for isosorbide dinitrate tablets must provide a daily dose-free interval to minimize the development of this tolerance. With immediate-release ISDN, it appears that one daily dose-free interval must be at least 14 hours long.

Large controlled studies with other nitrates suggest that no dosing regimen with isosorbide dinitrate tablets should be expected to provide more than about 12 hours of continuous anti-anginal efficacy per day.

Isosorbide dinitrate tablets USP, 5 mg, light pink to pink colored, spotted, round shaped, biconvex, uncoated tablets debossed with "1148" on one side and score on other side.

Isosorbide dinitrate tablets USP, 10 mg, white to off white colored, round shaped, biconvex, uncoated tablets debossed with "1149" on one side and score on other side.

Isosorbide dinitrate tablets USP, 20 mg, light green to green colored, spotted, round shaped, biconvex, uncoated tablets debossed with "1150" on one side and score on other side.

Isosorbide dinitrate tablets USP, 30 mg, light blue to blue colored, spotted, round shaped, biconvex, uncoated tablets debossed with "1151" on one side and score on other side.

Isosorbide dinitrate tablets USP, 40 mg, light green to green colored, spotted, round, biconvex, uncoated tablets, debossed with "1152" on one side and score on other side.

Protect from Light. Dispense in a light-resistant, tight container. 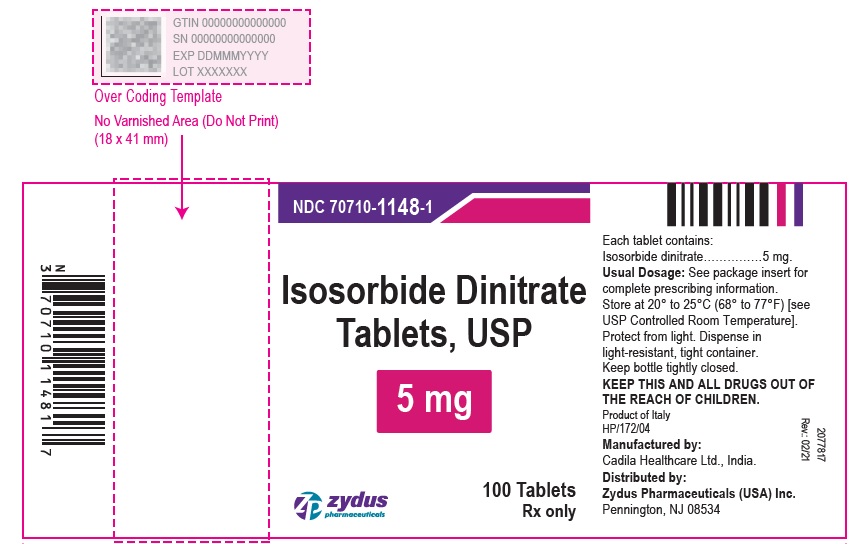 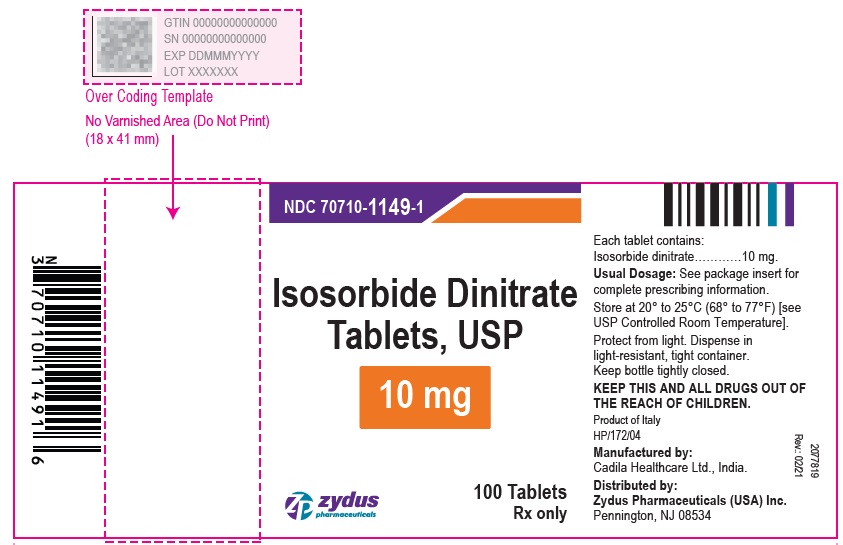 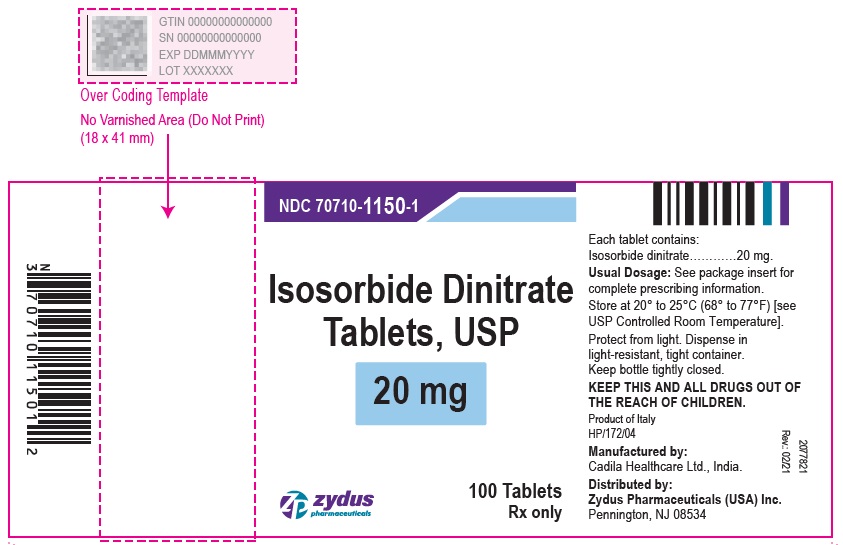 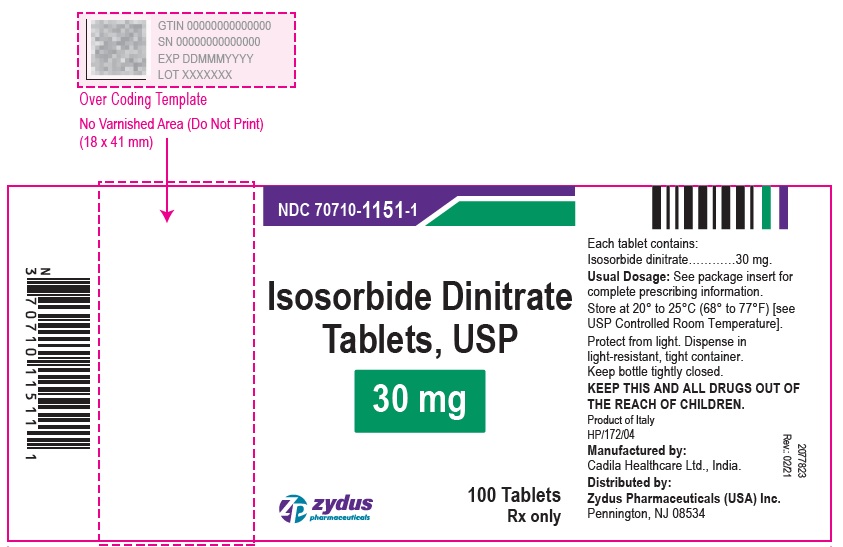 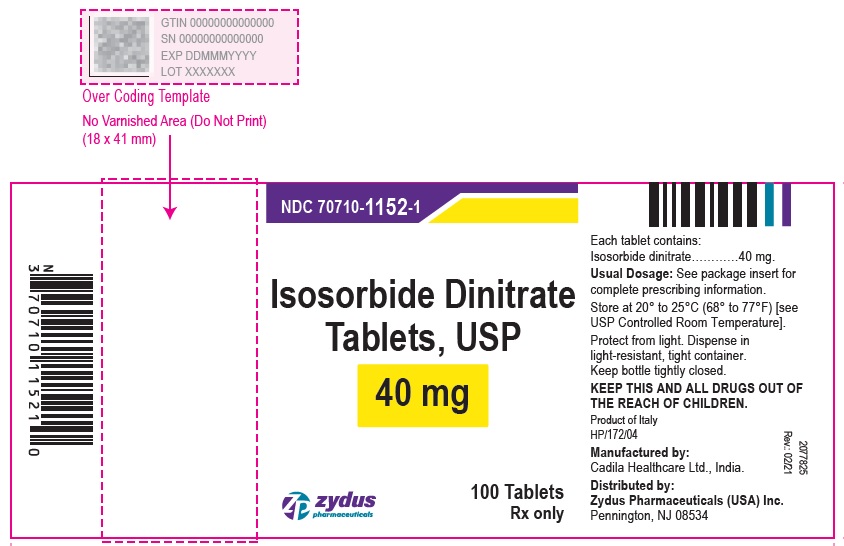