Oxazepam is the first of a chemical series of compounds, the 3-hydroxybenzodiazepinones. A therapeutic agent providing versatility and flexibility in control of common emotional disturbances, this product exerts prompt action in a wide variety of disorders associated with anxiety, tension, agitation and irritability, and anxiety associated with depression. In tolerance and toxicity studies on several animal species, this product reveals significantly greater safety factors than related compounds (chlordiazepoxide and diazepam) and manifests a wide separation of effective doses and doses inducing side effects.

Oxazepam is 7 chloro-1,3-dihydro-3-hydroxy-5-phenyl-2H-1,4-benzodiazepin-2-one and has the following structural formula: 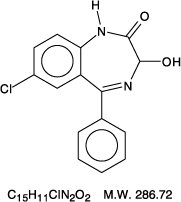 Oxazepam is a white crystalline powder.

Each capsule for oral administration contains 10 mg, 15 mg or 30 mg of oxazepam.

Pharmacokinetic testing in 12 volunteers demonstrated that a single 30 mg dose of a capsule, tablet or suspension will result in an equivalent extent of absorption. For the capsule and tablet, peak plasma levels averaged 450 mg/mL and were observed to occur about 3 hours after dosing. The mean elimination half-life for oxazepam was approximately 8.2 hours (range 5.7 to 10.9 hours).

This product has a single, major inactive metabolite in man, a glucuronide excreted in urine.

Age (<80 years old) does not appear to have a clinically significant effect on oxazepam kinetics. A statistically significant increase in elimination half-life in the very elderly (>80 years of age) as compared to younger subjects has been reported, due to a 30% increase in volume of distribution, as well as a 50% reduction in unbound clearance of oxazepam in the very elderly. (see PRECAUTIONS: Geriatric Use).

In mice, oxazepam exerts an anticonvulsant (anti-pentylenetetrazol) activity at 50-percent-effective doses of about 0.6 mg/kg orally. (Such anticonvulsant activity of benzodiazepines correlates with their tranquilizing properties.) To produce ataxia (rotabar test) and sedation (abolition of spontaneous motor activity), the 50-percent-effective doses of this product are greater than 5 mg/kg orally. Thus, about ten times the therapeutic (anticonvulsant) dose must be given before ataxia ensues, indicating a wide separation of effective doses and doses inducing side effects.

In evaluation of antianxiety activity of compounds, conflict behavioral tests in rats differentiate continuous response for food in the presence of anxiety-provoking stress (shock) from drug-induced motor incoordination. This product shows significant separation of doses required to relieve anxiety and doses producing sedation or ataxia. Ataxia-producing doses exceed those of related CNS-acting drugs.

Acute oral LD50 in mice is greater than 5000 mg/kg, compared to 800 mg/kg for a related compound (chlordiazepoxide).

Subacute toxicity studies in dogs for four weeks at 480 mg/kg daily showed no specific changes; at 960 mg/kg, two out of eight died with evidence of circulatory collapse. This wide margin of safety is significant compared to chlordiazepoxide HCl, which showed nonspecific changes in six dogs at 80 mg/kg. On chlordiazepoxide, two out of six died with evidence of circulatory collapse at 127 mg/kg, and six out of six died at 200 mg/kg daily. Chronic toxicity studies of oxazepam in dogs at 120 mg/kg/day for 52 weeks produced no toxic manifestation.

Fatty metamorphosis of the liver has been noted in six-week toxicity studies in rats given this product at 0.5% of the diet. Such accumulations of fat are considered reversible, as there is no liver necrosis or fibrosis. Breeding studies in rats through two successive litters did not produce fetal abnormality.

Oxazepam has not been adequately evaluated for mutagenic activity.

In a carcinogenicity study, oxazepam was administered with diet to rats for two years. Male rats receiving 30 times the maximum human dose showed a statistical increase, when compared to controls, in benign thyroid follicular cell tumors, testicular interstitial cell adenomas, and prostatic adenomas. An earlier published study reported that mice fed dietary dosages of 35 or 100 times the human daily dose of oxazepam for 9 months developed a dose-related increase in liver adenomas.1 In an independent analysis of some of the microscopic slides from this mouse study, several of these tumors were classified as liver carcinomas. At this time, there is no evidence that clinical use of oxazepam is associated with tumors.

Oxazepam is indicated for the management of anxiety disorders or for the short-term relief of the symptoms of anxiety. Anxiety or tension associated with the stress of everyday life usually does not require treatment with an anxiolytic.

Anxiety associated with depression is also responsive to oxazepam therapy.

This product has been found particularly useful in the management of anxiety, tension, agitation and irritability in older patients.

Alcoholics with acute tremulousness, inebriation, or with anxiety associated with alcohol withdrawal are responsive to therapy.

The effectiveness of oxazepam in long-term use, that is, more than 4 months, has not been assessed by systematic clinical studies. The physician should periodically reassess the usefulness of the drug for the individual patient.

History of previous hypersensitivity reaction to oxazepam. Oxazepam is not indicated in psychoses.

As with other CNS-acting drugs, patients should be cautioned against driving automobiles or operating dangerous machinery until it is known that they do not become drowsy or dizzy on oxazepam therapy.

Patients should be warned that the effects of alcohol or other CNS-depressant drugs may be additive to those of oxazepam, possibly requiring adjustment of dosage or elimination of such agents.

Withdrawal symptoms, similar in character to those noted with barbiturates and alcohol (convulsions, tremor, abdominal and muscle cramps, vomiting, and sweating), have occurred following abrupt discontinuance of oxazepam. The more severe withdrawal symptoms have usually been limited to those patients who received excessive doses over an extended period of time. Generally milder withdrawal symptoms (e.g., dysphoria and insomnia) have been reported following abrupt discontinuance of benzodiazepines taken continuously at therapeutic levels for several months. Consequently, after extended therapy, abrupt discontinuation should generally be avoided and a gradual dosage-tapering schedule followed. Addiction-prone individuals (such as drug addicts or alcoholics) should be under careful surveillance when receiving oxazepam or other psychotropic agents because of the predisposition of such patients to habituation and dependence.

An increased risk of congenital malformations associated with the use of minor tranquilizers (chlordiazepoxide, diazepam, and meprobramate) during the first trimester of pregnancy has been suggested in several studies. Oxazepam, a benzodiazepine derivative, has not been studied adequately to determine whether it, too, may be associated with an increased risk of fetal abnormality. Because use of these drugs is rarely a matter of urgency, their use during this period should almost always be avoided. The possibility that a woman of childbearing potential may be pregnant at the time of institution of therapy should be considered. Patients should be advised that if they become pregnant during therapy or intend to become pregnant, they should communicate with their physician about the desirability of discontinuing the drug.

Although hypotension has occurred only rarely, oxazepam should be administered with caution to patients in whom a drop in blood pressure might lead to cardiac complications. This is particularly true in the elderly patient.

To assure the safe and effective use of oxazepam, patients should be informed that, since benzodiazepines may produce psychological and physical dependence, it is advisable that they consult with their physician before either increasing the dose or abruptly discontinuing this drug.

Clinical studies of oxazepam were not adequate to determine whether subjects aged 65 and over respond differently than younger subjects. Age (<80 years old) does not appear to have a clinically significant effect on oxazepam kinetics (see CLINICAL PHARMACOLOGY).

Clinical circumstances, some of which may be more common in the elderly, such as hepatic or renal impairment, should be considered. Greater sensitivity of some older individuals to the effects of oxazepam (e.g., sedation, hypotension, paradoxical excitation) cannot be ruled out (see PRECAUTIONS: General; see ADVERSE REACTIONS). In general, dose selection for oxazepam for elderly patients should be cautious, usually starting at the lower end of the dosing range (see DOSAGE AND ADMINISTRATION).

The necessity for discontinuation of therapy due to undesirable effects has been rare. Transient mild drowsiness is commonly seen in the first few days of therapy. If it persists, the dosage should be reduced. In few instances, dizziness, vertigo, headache and rarely syncope have occurred either alone or together with drowsiness. Mild paradoxical reactions; i.e., excitement, stimulation of affect, have been reported in psychiatric patients; these reactions may be secondary to relief of anxiety and usually appear in the first two weeks of therapy.

Other side effects occurring during oxazepam therapy include rare instances of minor diffuse skin rashes-morbilliform, urticarial, and maculopapular, nausea, lethargy, edema, slurred speech, tremor, and altered libido. Such side effects have been infrequent and are generally controlled with reduction of dosage. A case of an extensive fixed drug eruption also has been reported.

Although rare, leukopenia and hepatic dysfunction including jaundice have been reported during therapy. Periodic blood counts and liver-function tests are advisable. Ataxia with oxazepam has been reported in rare instances and does not appear to be specifically related to dose or age.

Although the following side reactions have not as yet been reported with oxazepam, they have occurred with related compounds (chlordiazepoxide and diazepam): paradoxical excitation with severe rage reactions, hallucinations, menstrual irregularities, change in EEG pattern, blood dyscrasias including agranulocytosis, blurred vision, diplopia, incontinence, stupor, disorientation, fever and euphoria.

Transient amnesia or memory impairment has been reported in association with the use of benzodiazepines.

In the management of overdosage with any drug, it should be born in mind that multiple agents may have been taken.

Induced vomiting and/or gastric lavage should be undertaken, followed by general supportive care, monitoring of vital signs, and close observation of the patient. Hypotension, though unlikely, usually may be controlled with norepinephrine bitartrate injection. The value of dialysis has not been adequately determined for oxazepam.

The benzodiazepine antagonist flumazenil may be used in hospitalized patients as an adjunct to, not as a substitute for, proper management of benzodiazepine overdose. The prescriber should be aware of a risk of seizure in association with flumazenil treatment, particularly in long-term benzodiazepine users and in cyclic antidepressant overdose. The complete flumazenil package insert including “CONTRAINDICATIONS,” “WARNINGS,” and “PRECAUTIONS” should be consulted prior to use.

Because of the flexibility of this product and the range of emotional disturbances responsive to it, dosage should be individualized for maximum beneficial effects.

Oxazepam Capsules, USP are available as:

10 mg: white capsules, imprinted GG 505 in black and pink ink bands and are supplied as:

15 mg: white capsules, imprinted GG 506 in black and red ink bands and are supplied as:

30 mg: white capsules, imprinted GG 507 in black and maroon ink bands and are supplied as: 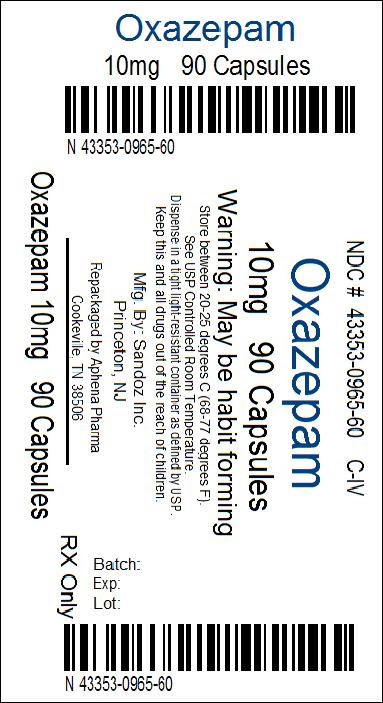 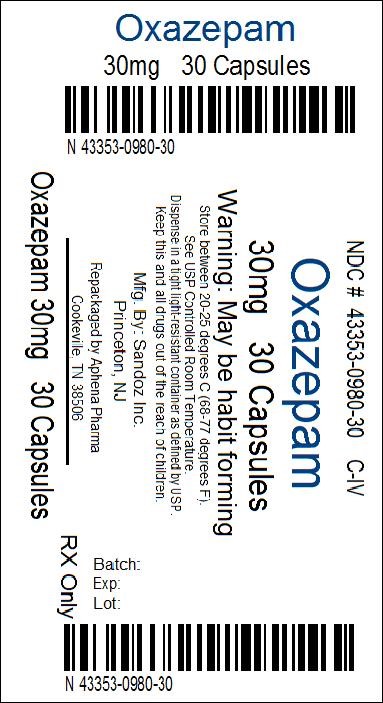