Hydrochlorothiazide Capsules, USP, 12.5 mg is the 3,4-dihydro derivative of chlorothiazide. Its chemical name is 6-chloro-3,4-dihydro-2H-1,2,4-benzothiadiazine-7-sulfonamide 1,1-dioxide. Its empirical formula is C7H8ClN3O4S2; its molecular weight is 297.74; and its structural formula is: 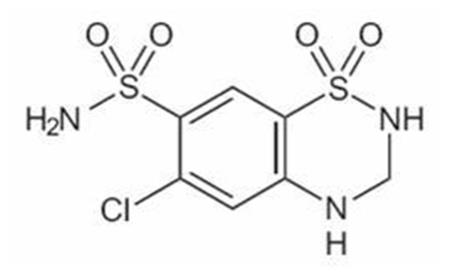 Hydrochlorothiazide Capsules, USP are #4 Teal Opaque/White Opaque two piece hard gelatin capsules imprinted with WATSON 347 and 12.5 mg in black ink. They are supplied in bottles of 100 and 500. Bottles of 100 are supplied with child resistant closures.