Thiotepa for Injection, USP is an ethylenimine-type compound. It is supplied as a non-pyrogenic, sterile Iyophilized powder for intravenous, intracavitary or intravesical administration, containing 15 mg of thiotepa. Thiotepa for injection is a synthetic product with antitumor activity. The chemical name for thiotepa is Aziridine, 1,1’1”-phosphinothioylidynetris-, or Tris (1-aziridinyl) phosphine sulfide. 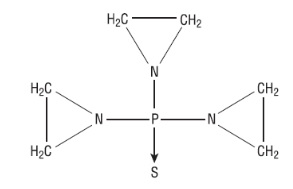 Thiotepa USP has the empirical formula C6H12N3PS, and a molecular weight of 189.22. When reconstituted with Sterile Water for Injection, the resulting solution has a pH of approximately 5.5 to 7.5. Thiotepa USP is stable in alkaline medium and unstable in acid medium.

Thiotepa is a cytotoxic agent of the polyfunctional type, related chemically and pharmacologically to nitrogen mustard. The radiomimetic action of thiotepa is believed to occur through the release of ethylenimine radicals which, like irradiation, disrupt the bonds of DNA. One of the principal bond disruptions is initiated by alkylation of guanine at the N-7 position, which severs the linkage between the purine base and the sugar and liberates alkylated guanines. The pharmacokinetics of thiotepa and TEPA in thirteen female patients (45 to 84 years) with advanced stage ovarian cancer receiving 60 mg and 80 mg thiotepa by intravenous infusion on subsequent courses given at 4 week intervals are presented in the following table:

TEPA, which possesses cytotoxic activity, appears to be the major metabolite of thiotepa found in human serum and urine. Urinary excretion of 14C-labeled thiotepa and metabolites in a 34-year old patient with metastatic carcinoma of the cecum who received a dose of 0.3 mg/kg intravenously was 63%. Thiotepa and TEPA in urine each accounts for less than 2% of the administered dose.

Thiotepa for Injection, USP has been tried with varying results in the palliation of a wide variety of neoplastic diseases. However, the most consistent results have been seen in the following tumors:

1. Adenocarcinoma of the breast.

2. Adenocarcinoma of the ovary.

4. For the treatment of superficial papillary carcinoma of the urinary bladder.

While now largely superseded by other treatments, thiotepa has been effective against other lymphomas, such as lymphosarcoma and Hodgkin’s disease.

In addition to its effect on the blood-forming elements (see WARNINGS and PRECAUTIONSsections), thiotepa may cause other adverse reactions.

General: Fatigue, weakness. Febrile reaction and discharge from a subcutaneous lesion may occur as the result of breakdown of tumor tissue.

Renal: Dysuria, urinary retention. There have been rare reports of chemical cystitis or hemorrhagic cystitis following intravesical, but not parenteral administration of thiotepa.

Respiratory: Prolonged apnea has been reported when succinylcholine was administered prior to surgery, following combined use of thiotepa and other anticancer agents. It was theorized that this was caused by decrease of pseudocholinesterase activity caused by the anticancer drugs.

Since absorption from the gastrointestinal tract is variable, thiotepa should not be administered orally.

Dosage must be carefully individualized. A slow response to thiotepa does not necessarily indicate a lack of effect. Therefore, increasing the frequency of dosing may only increase toxicity. After maximum benefit is obtained by initial therapy, it is necessary to continue the patient on maintenance therapy (1 to 4 week intervals). In order to continue optimal effect, maintenance doses should not be administered more frequently than weekly in order to preserve correlation between dose and blood counts.

Preparation and Administration Precautions: Thiotepa is a cytotoxic anticancer drug and as with other potentially toxic compounds, caution should be exercised in handling and preparation of thiotepa. Skin reactions associated with accidental exposure to thiotepa may occur. The use of gloves is recommended. If thiotepa solution contacts the skin, immediately wash the skin thoroughly with soap and water. If thiotepa contacts mucous membranes, the membranes should be flushed thoroughly with water.

Preparation of Solution: Thiotepa for injection should be reconstituted with 1.5 mL of sterile water for injection resulting in a drug concentration of approximately 10 mg/mL. The actual withdrawable quantities and concentration achieved are illustrated in the following table:

Initial and Maintenance Doses: Initially the higher dose in the given range is commonly administered. The maintenance dose should be adjusted weekly on the basis of pretreatment control blood counts and subsequent blood counts.

Intravenous Administration: Thiotepa may be given by rapid intravenous administration in doses of 0.3 to 0.4 mg/kg. Doses should be given at 1 to 4 week intervals.

Intracavitary Administration: The dosage recommended is 0.6 to 0.8 mg/kg. Administration is usually effected through the same tubing which is used to remove the fluid from the cavity involved.

Intravesical Administration: Patients with papillary carcinoma of the bladder are dehydrated for 8 to 12 hours prior to treatment. Then 60 mg of thiotepa in 30 to 60 mL of Sodium Chloride Injection is instilled into the bladder by catheter. For maximum effect, the solution should be retained for 2 hours. If the patient finds it impossible to retain 60 mL for 2 hours, the dose may be given in a volume of 30 mL. If desired, the patient may be positioned every 15 minutes for maximum area contact. The usual course of treatment is once a week for 4 weeks. The course may be repeated if necessary, but second and third courses must be given with caution since bone-marrow depression may be increased. Deaths have occurred after intravesical administration, caused by bone-marrow depression from systemically absorbed drug.

Handling and Disposal: Follow safe cytotoxic agent handling procedures. Several guidelines on this subject have been published.1-6 There is no general agreement that all of the procedures recommended in the guidelines are necessary or appropriate.

Thiotepa for Injection, USP, for single use only, is available in single-dose vials containing 15 mg of nonpyrogenic, sterile lyophilized powder, supplied as follows:

1. Recommendations for the Safe Handling of Parenteral Antineoplastic Drugs. NIH Publication No. 83-2621. For sale by the Superintendent of Documents, US Government Printing Office, Washington, DC 20402. 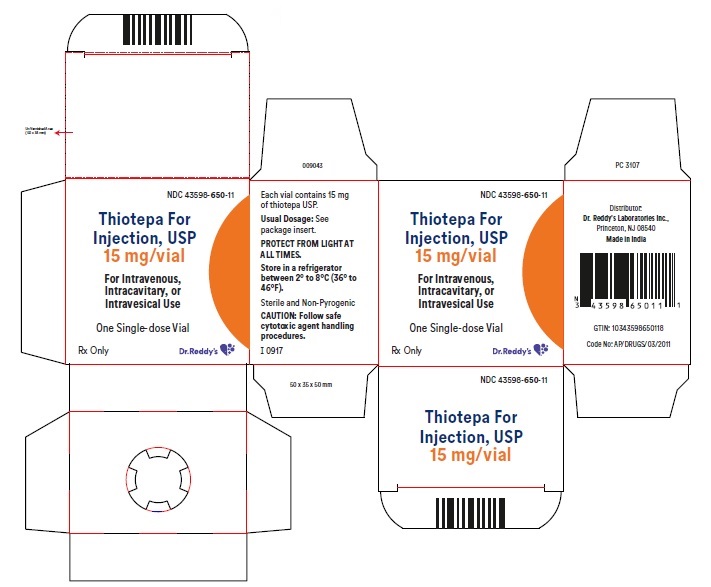