Nadolol USP is a white to off-white, practically odorless, crystalline powder. It is freely soluble in water at pH2, in alcohol, and in methanol and slightly soluble in chloroform. Nadolol USP is available for oral administration as 20 mg, 40 mg, and 80 mg tablets and contains the following inactive ingredients: citric acid, corn starch, magnesium stearate, microcrystalline cellulose and povidone. In addition, the 80 mg tablets contain sodium starch glycolate.

Nadolol specifically competes with beta-adrenergic receptor agonists for available beta-receptor sites; it inhibits both the beta1 receptors located chiefly in cardiac muscle and the beta2 receptors located chiefly in the bronchial and vascular musculature, inhibiting the chronotropic, inotropic, and vasodilator responses to beta-adrenergic stimulation proportionately. Nadolol has no intrinsic sympathomimetic activity and, unlike some other beta-adrenergic blocking agents, nadolol has little direct myocardial depressant activity and does not have an anesthetic-like membrane-stabilizing action. Animal and human studies show that nadolol slows the sinus rate and depresses AV conduction. In dogs, only minimal amounts of nadolol were detected in the brain relative to amounts in blood and other organs and tissues. Nadolol has low lipophilicity as determined by octanol/water partition coefficient, a characteristic of certain beta-blocking agents that has been correlated with the limited extent to which these agents cross the blood-brain barrier, their low concentration in the brain, and low incidence of CNS-related side effects.

Nadolol tablets are indicated for the long-term management of patients with angina pectoris.

Nadolol tablets are indicated in the management of hypertension; they may be used alone or in combination with other antihypertensive agents, especially thiazide-type diuretics.

Hypersensitivity to catecholamines has been observed in patients withdrawn from beta-blocker therapy; exacerbation of angina and, in some cases, myocardial infarction have occurred after abrupt discontinuation of such therapy. When discontinuing chronically administered nadolol, particularly in patients with ischemic heart disease, the dosage should be gradually reduced over a period of one to two weeks and the patient should be carefully monitored. If angina markedly worsens or acute coronary insufficiency develops, nadolol administration should be reinstituted promptly, at least temporarily, and other measures appropriate for the management of unstable angina should be taken. Patients should be warned against interruption or discontinuation of therapy without the physician’s advice. Because coronary artery disease is common and may be unrecognized, it may be prudent not to discontinue nadolol therapy abruptly even in patients treated only for hypertension.

Patients, especially those with evidence of coronary artery insufficiency, should be warned against interruption or discontinuation of nadolol therapy without the physician’s advice. Although cardiac failure rarely occurs in properly selected patients, patients being treated with beta-adrenergic blocking agents should be advised to consult the physician at the first sign or symptom of impending failure. The patient should also be advised of a proper course in the event of an inadvertently missed dose.

In animal reproduction studies with nadolol, evidence of embryo- and fetotoxicity was found in rabbits, but not in rats or hamsters, at doses 5 to 10 times greater (on a mg/kg basis) than the maximum indicated human dose. No teratogenic potential was observed in any of these species. There are no adequate and well-controlled studies in pregnant women. Nadolol should be used during pregnancy only if the potential benefit justifies the potential risk to the fetus. Neonates whose mothers are receiving nadolol at parturition have exhibited bradycardia, hypoglycemia, and associated symptoms.

DOSAGE MUST BE INDIVIDUALIZED. NADOLOL MAY BE ADMINISTERED WITHOUT REGARD TO MEALS.

Nadolol Tablets USP, 20 mg are available as white, round tablet debossed “20” on one side, and a bisect on the other side with “Z” on the upper half and “4235” on the lower half, containing 20 mg of nadolol USP packaged in bottles of 30 tablets.

Manufactured In India By: 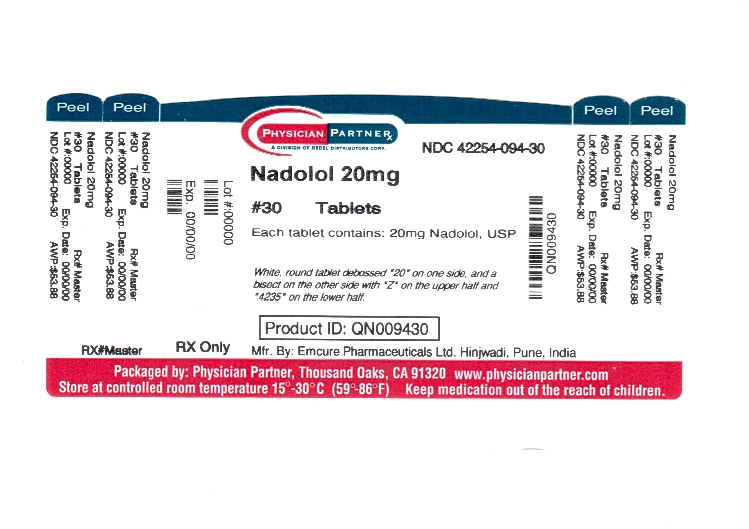