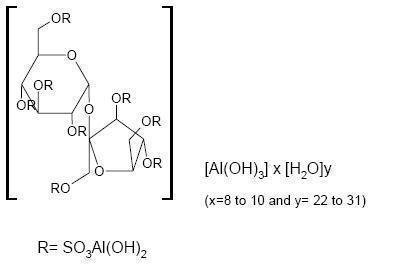 These observations suggest that sucralfate’s antiulcer activity is the result of formation of an ulcer-adherent complex that covers the ulcer site and protects it against further attack by acid, pepsin, and bile salts. There are approximately 14 to 16 mEq of acid-neutralizing capacity per 1-g dose of sucralfate.

Error: java.security.PrivilegedActionException: net.sf.saxon.xpath.DynamicError: org.xml.sax.SAXParseException: The end-tag for element type "col" must end with a '>' delimiter.

CARAFATE® (sucralfate) Suspension is indicated in the short-term (up to 8 weeks) treatment of active duodenal ulcer.

The mechanism of these interactions appears to be nonsystemic in nature, presumably resulting from sucralfate binding to the concomitant agent in the gastrointestinal tract. In all cases studied to date (cimetidine, ciprofloxacin, digoxin, norfloxacin, ofloxacin, and ranitidine), dosing the concomitant medication 2 hours before sucralfate eliminated the interaction. Because of the potential of CARAFATE to alter the absorption of some drugs, CARAFATE should be administered separately from other drugs when alterations in bioavailability are felt to be critical. In these cases, patients should be monitored appropriately.

Clinical studies of CARAFATE® Suspension did not include sufficient numbers of subjects aged 65 and over to determine whether they respond differently from younger subjects. Other reported clinical experience has not identified differences in responses between the elderly and younger patients. In general, dose selection for an elderly patient should be cautious, usually starting at the low end of the dosing range, reflecting the greater frequency of decreased hepatic, renal, or cardiac function, and of concomitant disease or other drug therapy. (See DOSAGE AND ADMINISTRATION)

Cases of hyperglycemia have been reported with sucralfate

Elderly: In general, dose selection for an elderly patient should be cautious, usually starting at the low end of the dosing range, reflecting the greater frequency of decreased hepatic, renal, or cardiac function, and of concomitant disease or other drug therapy. (See PRECAUTIONS Geriatric Use)

Prescribing Information as of December 2010

Carafate® is a reg﻿istered trademark of Aptalis Pharma Canada Inc.