CAUTION: USE PYRIDOSTIGMINE BROMIDE AS PRETREATMENT ONLY. AFTER EXPOSURE TO SOMAN, USE ATROPINE AND 2-PAM. ALWAYS USE PROTECTIVE GARMENT(S).

FOR MILITARY MEDICAL USE ONLY

The evidence for the effectiveness of pyridostigmine bromide as pretreatment against soman-induced toxicity was derived from animal studies alone. [See Nonclinical Toxicology (13.2).]

FOR MILITARY MEDICAL USE ONLY

The primary protection against exposure to chemical nerve agents consists of wearing protective garments including masks, hoods, and overgarments designed specifically for this use.

Individuals must not rely solely upon pretreatment with pyridostigmine bromide and the antidotes atropine and pralidoxime (2-PAM) to provide complete protection from poisoning by soman nerve agent.

Pyridostigmine Bromide Tablets, USP, 30 mg, are round, white and imprinted with the letters "PBT."

5.1 Stopping Pyridostigmine Bromide and Using Atropine and 2-PAM in the Event of Soman Exposure

Pyridostigmine bromide should be used with caution in persons with bronchial asthma, chronic obstructive pulmonary disease, bradycardia, or cardiac arrhythmias and, for example, in people being treated for hypertension or glaucoma with beta adrenergic receptor blockers.

Caution should be taken when administering pyridostigmine bromide to individuals with known bromide sensitivity. The risks and benefits of administration must be weighed against the potential for rash or other adverse reactions in these individuals. [See Adverse Reactions (6).]

If personnel experience serious adverse reactions such as difficult breathing, severe dizziness, or loss of consciousness as a result of ingestion of pyridostigmine bromide, they should temporarily discontinue use of product and seek immediate medical attention. Personnel should report serious adverse events to their commander and responsible medical officer.

The most common adverse reactions (≥ 3%) are diarrhea, abdominal pain, dysmenorrhea, and twitch.

Pyridostigmine bromide is a quaternary ammonium compound and does not readily cross the blood-brain barrier. Compared to the peripheral effects of pyridostigmine bromide, central nervous system manifestations are less frequent and less serious, primarily consisting of headache and vertigo, with minor and clinically insignificant changes in heart rate, blood pressure, and respiratory function.

As with any compound containing bromide, a skin rash may be observed in an occasional patient, which usually subsides promptly upon discontinuance of the medication.

In a controlled study of 90 healthy volunteers comparing pyridostigmine bromide 30 mg every 8 hours to placebo for 21 days, the following incidences of adverse reactions was reported.

Other less common adverse reactions seen during controlled and uncontrolled clinical trials for pyridostigmine include the following:

During safety studies at the recommended dosage, there were two reports of loss of consciousness, one of which also included urinary and fecal incontinence, stiffness of the upper torso and arms, post-syncopal skin pallor, post-syncopal confusion, and post-syncopal weakness (suggesting a seizure event).

A potential interaction between the antimalarial drug mefloquine and pyridostigmine bromide exists through a possible additive effect on the gastrointestinal tract. The most common complaint about both drugs is loose bowels. It has been reported that simple additive effects on the atrial rate occur when mefloquine and pyridostigmine bromide are combined.

Because anticholinesterase drugs are often used in the treatment of glaucoma, the use of pyridostigmine bromide in such situations may have an additive effect that may cause or exacerbate problems with night vision.

The bradycardia associated with the use of narcotics may exacerbate pyridostigmine-induced bradycardia.

7.4 Drugs that Interfere with Neuromuscular Transmission

Theoretically, drugs such as dexpanthenol, which are converted to pantothenic acid in vivo, may have additive effects with pyridostigmine bromide by increasing production of acetylcholine.

Clinical studies of pyridostigmine bromide did not contain sufficient numbers of subjects aged 65 and over to determine whether they respond differently than younger subjects. In general, dose selection for an elderly patient should be cautious, reflecting the greater frequency of decreased hepatic, renal, or cardiac function, and of concomitant disease or other drug therapy.

In the elderly (71 to 85 years of age) the elimination half-life, volume of distribution (central and steady state) were comparable with the young (21to 51 years of age). However, the systemic plasma clearance was significantly lower in the elderly compared to the young (6.7 ± 2.2 vs. 9.5 ± 2.7 mL/min/kg).

This drug is known to be substantially excreted by the kidney, and the risk of toxic reactions to this drug may be greater in patients with impaired renal function. Caution should be observed, and dosage be selected carefully, when administering pyridostigmine bromide to patients with impaired renal function. In anephric patients, a 3-fold increase in the elimination half-life and a 75% decrease in systemic clearance were observed. [See Clinical Pharmacology (12.3).] It may be useful to monitor renal function.

No information is available on the pharmacokinetics of pyridostigmine bromide in hepatic impaired patients.

Although the abuse potential of pyridostigmine bromide has not been specifically assessed, no abuse of, tolerance to, withdrawal from, or drug-seeking behavior was observed in patients who received pyridostigmine bromide in clinical trials. Cholinesterase inhibitors are not believed to be associated with drug abuse.

In the treatment of pyridostigmine bromide overdosage, maintaining adequate respiration is of primary importance. Tracheostomy, bronchial aspiration, and postural drainage may be required to maintain an adequate airway; respiration can be assisted mechanically if required. Supplemental oxygen may be necessary. Pyridostigmine bromide should be discontinued immediately and 1 mg to 4 mg of atropine sulfate administered intravenously. Additional doses of atropine may be given every 5 to30 minutes as needed to control muscarinic symptoms. Atropine overdosage should be avoided, as tenacious secretions and bronchial plugs may result. It should be kept in mind that unlike muscarinic effects, the skeletal muscle effects and consequent respiratory paralysis (nicotinic effects), which can occur following pyridostigmine overdosage, are not alleviated by atropine.

Pyridostigmine bromide has a molecular formula of C9H13BrN2O2, a molecular weight of 261.12, and the following molecular structure: 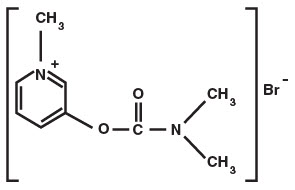 Pyridostigmine is a reversible cholinesterase inhibitor.

The mechanism of soman-induced death is reasonably well understood. Death is believed to result primarily from respiratory failure due to irreversible inhibition of the enzyme acetylcholinesterase and the consequent increase in the level of the neurotransmitter acetylcholine 1) at nicotinic receptors at the neuromuscular junction, resulting in pathological stimulation and ultimate failure of the muscles of respiration, 2) at muscarinic receptors in secretory glands and smooth muscle, resulting in excessive respiratory secretions and bronchoconstriction, and 3) at cholinergic receptors in the brain, resulting in central respiratory depression.

In anephric patients (n = 4), the elimination half-life increased 3 fold and the systemic clearance decreased by 75%. [See Use in Specific Populations (8.6).]

No information is available on the pharmacokinetics of pyridostigmine bromide in hepatic impaired patients.

The clearance of pyridostigmine bromide is not influenced by gender.

No long-term studies to evaluate carcinogenicity have been performed in animals.

Pyridostigmine bromide did not impair fertility in male and female rats given oral doses of up to 45 mg/kg/day (5 times the recommended human daily dose of 90 mg on a mg/m2 basis) beginning at 10 (males) or 2 (females) weeks prior to mating.

Pyridostigmine bromide pretreatment has been shown in animals to decrease the lethality of the soman nerve agent, provided atropine and pralidoxime (2-PAM) are administered immediately after exposure to soman.

Additional studies in rhesus monkeys and guinea pigs also showed effectiveness of pyridostigmine bromide (in the presence of post-soman administration of atropine and 2-PAM). The magnitude of effect in guinea pigs was smaller than that in monkeys (soman LD50 increased 4 to 7 fold compared to untreated control and 2- to 4-fold compared to atropine/ 2-PAM alone).

Animal studies have shown that pyridostigmine bromide pretreatment was effective only when animals were given atropine and 2-PAM after exposure to soman.

Evidence of the effectiveness of pyridostigmine as a pretreatment for soman poisoning was obtained from studies in animals alone, because it is clearly unethical to perform such studies in humans.

Immediate Container: Twenty-one (21) tablets individually sealed in a blister or strip package which is supplied in a protective sleeve.

The NSN refers to the actual unit that is ordered from supply (if someone orders 1 of this stock number they will get one package of 10 blister packs).

Discard the contents of the blister package after removal from refrigerator for more than a total of 3 months. Do not use after the 10-year expiration date provided on the package.

The following information and advice should be discussed with personnel when Pyridostigmine Bromide is issued.

17.1 Indication and Conditions of Use

Pyridostigmine bromide must not be taken by persons with any of the following:

Personnel should be instructed to inform their doctor or medic before taking pyridostigmine bromide if they:

Most side effects are mild and will disappear without treatment.

Personnel should contact their unit medical officer if side effects from pyridostigmine bromide continue and limit duty performance.

The Department of Defense (DoD) may collect information on the use of pyridostigmine bromide to help decide how best to protect deployed forces in the future. Information that identifies individual persons will remain confidential. However, the FDA may review any data collected by DoD for the purpose of evaluating pyridostigmine bromide.

17.6 Questions and Requests for Information

Questions about personnel rights and welfare should be directed to the unit medical officer, or e-mailed to usamrmcregulatoryaffairs@mail.mil.

Manufactured by Bausch Health Companies Inc.,
Laval, Quebec H7L 4A8 for US Department of Defense 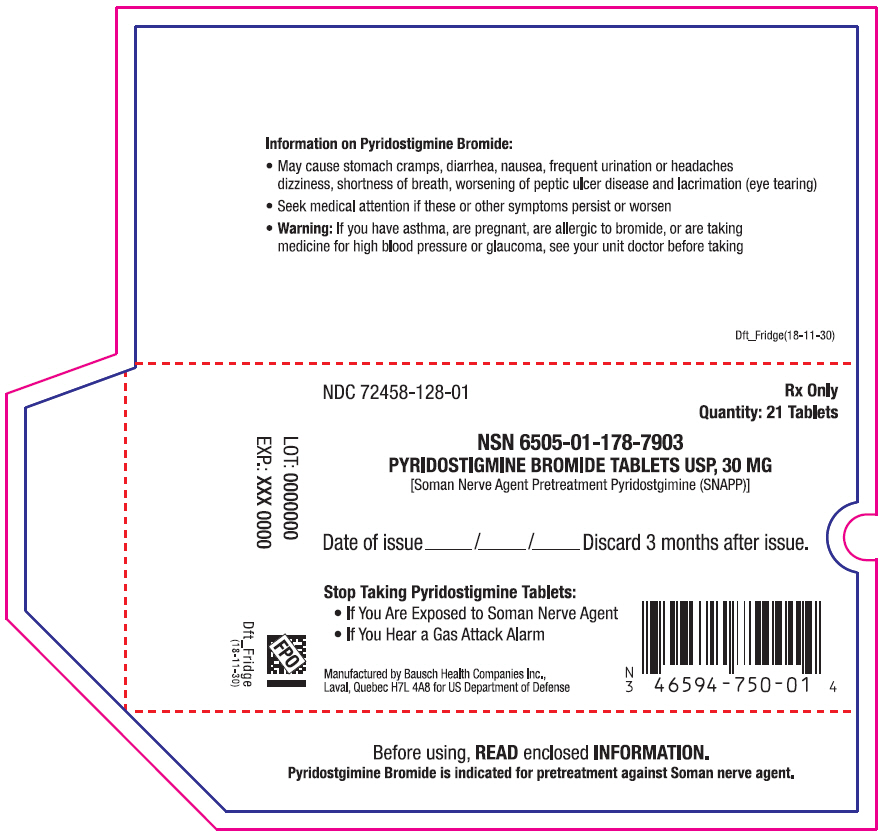