Thyroid hormones, including Levothyroxine Sodium Injection, should not be used for the treatment of obesity or for weight loss.

Larger doses may produce serious or even life threatening manifestations of toxicity. (6,10)

Levothyroxine Sodium Injection is indicated for the treatment of myxedema coma.

Overtreatment with Levothyroxine Sodium Injection may cause arrhythmias, tachycardia, myocardial ischemia and infarction, or worsening of congestive heart failure and death, particularly in patients with cardiovascular disease and in elderly patients. Start with lower doses in elderly patients and in patients with underlying cardiovascular disease and monitor patients after administration of Levothyroxine Sodium Injection for cardiac adverse reactions.

Adverse reactions associated with levothyroxine are primarily those of hyperthyroidism due to therapeutic overdosage [see Warnings and Precautions (5), Overdosage (10)]. They include the following:

Addition of levothyroxine to antidiabetic or insulin therapy may result in increased antidiabetic agent or insulin requirements. Careful monitoring of glycemic control is recommended.

Levothyroxine increases the response to oral anticoagulant therapy. Therefore, a decrease in the dose of anticoagulant may be warranted with correction of the hypothyroid state. Closely monitor coagulation tests to permit appropriate and timely dosage adjustments.

Concurrent use of ketamine and levothyroxine may produce marked hypertension and tachycardia. Closely monitor blood pressure and heart rate in these patients.

There is no available data with use of Levothyroxine Sodium Injection in pregnant women. The clinical data in pregnant women treated with oral levothyroxine to maintain a euthyroid state have not reported increased rates of major birth defects, miscarriages, or adverse maternal or fetal outcomes (see Data). There are risks to the mother and fetus associated with myxedema coma in pregnancy (see Clinical Considerations). Animal reproduction studies have not been conducted with levothyroxine sodium.

Myxedema coma is a medical emergency which can be fatal, if left untreated. Delaying treatment in pregnant women with myxedema coma increases the risk of maternal and fetal morbidity and mortality. Life-sustaining therapy for the pregnant woman should not be withheld due to potential concerns regarding the effects of Levothyroxine Sodium Injection on the fetus.

The safety and efficacy of Levothyroxine Sodium Injection have not been established in pediatric patients.

Because of the increased prevalence of cardiovascular disease among the elderly, initiate Levothyroxine Sodium Injection with lower doses in elderly patients and in patients with underlying cardiovascular disease and closely monitor for cardiac adverse reactions. Atrial arrhythmias can occur in elderly patients. Atrial fibrillation is the most common of the arrhythmias observed with levothyroxine overtreatment in the elderly [see Dosage and Administration (2.1) and Warnings and Precautions (5.1)].

The signs and symptoms of overdosage are those of hyperthyroidism [see Warnings and Precautions (5) and Adverse Reactions (6)]. In addition, confusion and disorientation may occur. Cerebral embolism, shock, coma, and death have been reported. Reduce the Levothyroxine Sodium Injection dose or temporarily discontinue if signs or symptoms of overdosage occur. Initiate appropriate supportive treatment as dictated by the patient's medical status.

Levothyroxine sodium is a synthetic T4 hormone that exerts the same physiologic effect as endogenous T4, thereby maintaining normal T4 levels when a deficiency is present.

Circulating thyroid hormones are greater than 99% bound to plasma proteins, including thyroxine binding globulin (TBG), thyroxine binding prealbumin (TBPA), and albumin (TBA), whose capacities and affinities vary for each hormone. The higher affinity of both TBG and TBPA for T4 partially explains the higher serum levels, slower metabolic clearance, and longer half life of T4 compared to T3. Protein bound thyroid hormones exist in reverse equilibrium with small amounts of free hormone. Only unbound hormone is metabolically active. Many drugs and physiologic conditions affect the binding of thyroid hormones to serum proteins [see Drug Interactions (7)]. Thyroid hormones do not readily cross the placental barrier [see Use in Specific Populations (8.1)].

T4 is slowly eliminated. The major pathway of thyroid hormone metabolism is through sequential deiodination. Approximately eighty percent of circulating T3 is derived from peripheral T4 by monodeiodination. The liver is the major site of degradation for both T4 and T3, with T4 deiodination also occurring at a number of additional sites, including the kidney and other tissues. Approximately 80% of the daily dose of T4 is deiodinated to yield equal amounts of T3 and reverse T3 (rT3). T3 and rT3 are further deiodinated to diiodothyronine. Thyroid hormones are also metabolized via conjugation with glucuronides and sulfates and excreted directly into the bile and gut where they undergo enterohepatic recirculation.

Thyroid hormones are primarily eliminated by the kidneys. A portion of the conjugated hormone reaches the colon unchanged, where it is hydrolyzed and eliminated in feces as the free hormones. Urinary excretion of T4 decreases with age.

Animal studies have not been performed to evaluate the carcinogenic potential, mutagenic potential or effects on fertility of Levothyroxine Sodium Injection.

Protect from light in the original vial in a carton and store at 20° to 25°C (68° to 77°F) [see USP Controlled Room Temperature]. The unopened vial may be stored for up to 24 hours exposed to indoor lighting outside of the carton. The drug product is preservative free. Discard any unused portion. 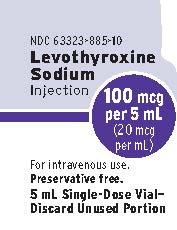 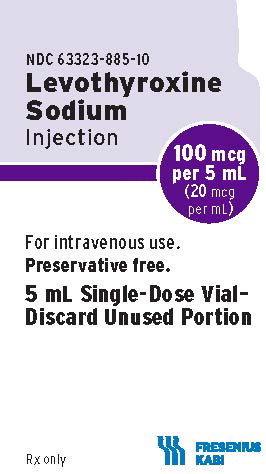 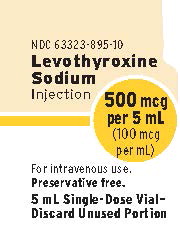 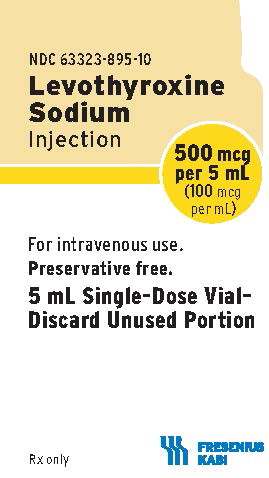 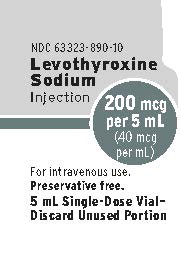 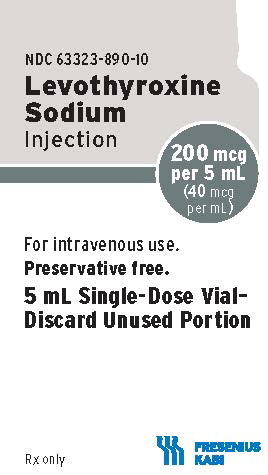